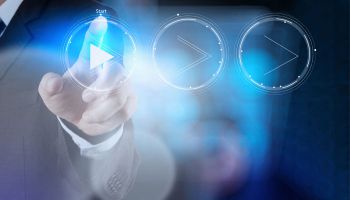 For decades, experts predicted the demise of the paper check. That day may be within sight, but reality lagged the hype cycle severely. Today, the roster of digital technologies keeps growing, to the point where impatience with the pace and means of banks “going digital” periodically erupts. Attend one of the many fintech-oriented conferences and you’d swear we are already there.

Much is changing, but for much of the industry “work in progress” characterizes the state of things most accurately. In the latest Banking Exchange magazine, a roundup of community bankers found that the most meaningful tech change often occurs behind the scenes. People don’t see the change at all—it’s not an app—but instead they know that some aspect of service is better.

Perhaps the greatest change is not digital, but analog, in the sense of the banker mind.

“There has been a shift in focus to realize that technology has become an important driver of success in the banking industry,” says Jim Eckenrode, managing director at Deloitte’s Center for Financial Services. “But we try to think of things in terms of more than ‘digital transformation’ to just ‘transformation.’ Digital is just part of a broader transformation of the banking business.”

Why and what of transformation

Customers, shepherded along by the consumer electronics trends, have been learning to experience commerce in new ways. While banks need to keep up and pioneer, where they can, changing the customer experience is only part of the challenge now, says Eckenrode. The other facet of the change is seeking greater operational efficiencies.

Eckenrode says it helps to separate the excitement of the latest announcement, the latest new tech twist, from the implementation of new technologies. Take blockchain, he says, an area of tremendous activity. “We feel that in financial services blockchain technology is still an emerging sector,” he explains. “It’s not a panacea. It’s an element in the industry’s toolbox.”

Overall, says Eckenrode, much of what’s been done with newer technologies thus far has been a matter of “expediency, but not with efficiency in mind.”

Regtech—application of new technologies to the ever-present compliance challenge—represents an area where efficiency may find traction, he suggests. But he warns that regtech, and fintech, more broadly, are not cure-alls.

“There won’t be one fintech that will solve all of a bank’s problems,” he says. Increasingly, banks need to think of their organizations as integrators of many tech streams that can be combined to produce better results. And a key part of that is picking the winners, the technologies and the third-party providers that can best meet the bank’s needs.

Smaller banks lack the financial resources to cover the waterfront of issues, but even larger institutions must make some changes to take advantage of what’s out there, says Eckenrode.

A key step is to broaden the talent pool they draw on. “They need to ‘skill up’ for a digital future,” says Eckenrode, and this means looking for data scientists, engineers, and customer experience designers who can help the bank reshape itself for a new playing field.

This is part of how a bank can begin to see transformation becoming enterprise-wide, says Eckenrode, versus simply being a matter of bolting on more digital technologies.

A key transformation that goes beyond digital tools is locational, in this sense: “It’s less about making the customer come to the bank and more about how the bank can go to where the customer is.” Some of what this implies is improving the back shop of the bank in order to support a shifting front end.

Looking ahead: What’s near, what’s not

You can’t read a special report or newsletter about financial technology without seeing mounds about artificial intelligence in all its incarnations. “A lot of fintechs are focusing on bringing those capabilities to bear,’ says Eckenrode.

That said, the form of AI seeing the most implementation now, and in the year ahead, he says, is robotic process automation, the use of software that applies basic AI principles to repetitive tasks. RPA in some ways is an extension of what computers have been doing for banks for decades: the ability to handle a multitude of mundane tasks more quickly, and, ideally, more accurately, than humans.

What’s not so hot in banking, right now, is the Internet of Things movement. Here Eckenrode isn’t thinking so much of the far end, where we’ll do our banking through the console of an autonomous car, but trends such as telematics. Telematics is a broad term for technologies that remotely monitor customer behavior, to influence pricing and other factors in their financial services, such as auto insurance.

Eckenrode says not much movement is seen in the near term on that front in banking. The obstacle here isn’t so much technology, but consumer acceptance.

“The challenge,” he says, “is figuring out how to convince consumers that they will benefit from giving their patterns of data to a financial institution. They have to choose which parts of their digital footprint they are willing to give up.”

Even in the insurance business, where telematics has seen some usage, that industry is still navigating the use of the technology. In auto coverage, the technology monitors behavior as it happens, possibly to address later claims. In life insurance, he notes, the idea would be influence behavior so a claim wouldn’t occur.