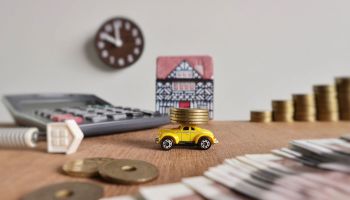 U.S. credit unions saw healthy growth in auto loans in the third quarter but also a corresponding uptick in delinquencies in that lending line.

Aggregate auto loans held on U.S. credit union balance sheets rose to $329.55 billion as of Sept. 30, a 12.4% increase year over year, according to S&P Global Market Intelligence data. At the end of the second quarter of 2017, credit unions had $321.47 billion in auto loans. 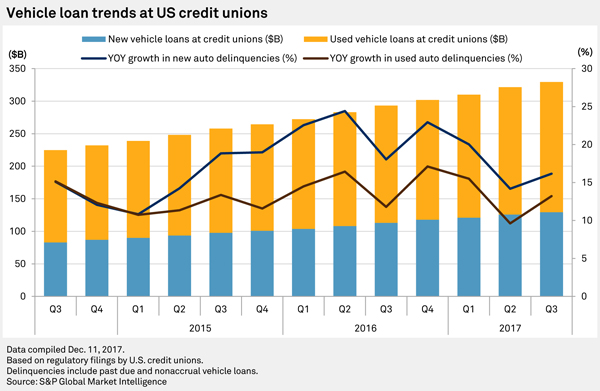 Randolph-Brooks FCU had the ninth-largest auto portfolio among U.S. credit unions at the end of the third quarter of 2017 with $2.73 billion in vehicle loans. That total represented year-over-year growth of 19.6% for the Live Oak, Texas-based credit union.

Sonya McDonald, executive vice-president and chief lending officer for Randolph-Brooks, said in an interview the credit union remains optimistic about auto lending moving into 2018 because of its results in 2017. She said there was pent-up demand, and 2017 was the year that people decided to trade in their old car for a new one. "We've seen an increase that doesn't seem to be slowing down any time soon," she said.

Nationally, auto sales have been stalling, but McDonald said that within the credit union's lending department there has been no decrease in demand for loans.

As to whether rising interest rates may soon affect borrowers’ behavior, McDonald said the credit union has not seen an impact on the consumer lending side like it has seen in mortgage lending. Consumer confidence seems to be growing, she said.

"When members are more confident in their economic future, they are more willing to assume debt," McDonald said. 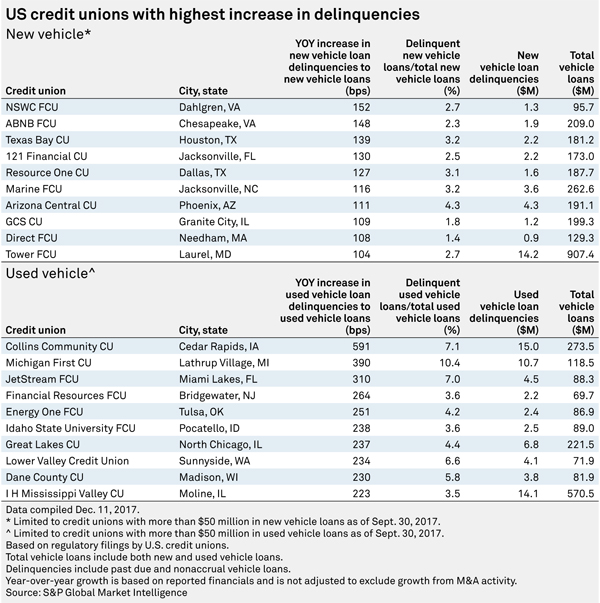 Used vehicle loans comprised the largest delinquent category at the third quarter's close for the credit union industry at $4.19 billion, up from $3.74 billion in the prior quarter. Total auto delinquencies were $5.78 billion at the end of the quarter, representing 1.75% of total auto loans.

Auto delinquencies for Randolph-Brooks stood at 0.84% at the third quarter compared to the industry median of 1.53%. McDonald said the credit union's underwriting standards and "robust" collections department allow it to mitigate a lot of potential risk. "We're able to reach out to members and work with them at the first sign of trouble," she said.

Car loans at other CUs

President and CEO Michael Poulos said in an interview the only issue the credit union is seeing in the market is significantly lower residual values when cars are repossessed and sold. "That is all we can see at this point," he said.

Suncoast CU had the 10th-largest auto portfolio among U.S. credit unions at the end of the third quarter of 2017 with $2.64 billion in vehicle loans. That total represented year-over-year growth of 23.0% for the Tampa, Fla.-based credit union.

Vicki Lovett, chief lending officer at Suncoast, said in an interview its members have strong and positive credit quality. "In any economic environment, there are some who have financial struggles for a variety of reasons, however, we continue to see stable-to-improving credit profiles from our members," she said.

Suncoast has experienced a continuing downward trend and then a leveling off, thus returning to a more normal and seasonal expectation.

Used vehicle loans have been a bit of a sore spot across the industry but Lovett said Suncoast has not seen a negative trend with used vehicles. "These tend to be more affordable vehicles and our members appreciate a good value," she said. At the end of the third quarter, delinquencies stood at 0.44% for Suncoast.

So is there any reason to fear things could get worse in terms of asset quality? Lovett said the credit union is optimistic for the future from an asset quality standpoint.

"We expect our portfolio to continue to grow and perform well for our membership," she said. 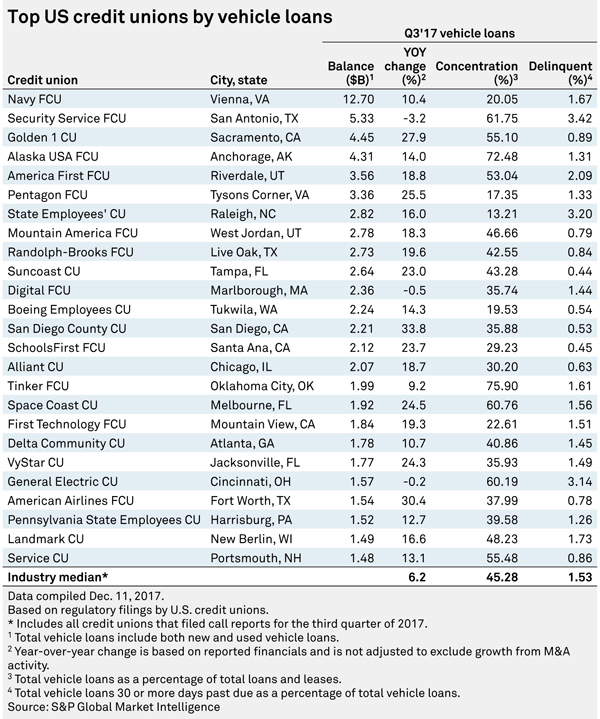 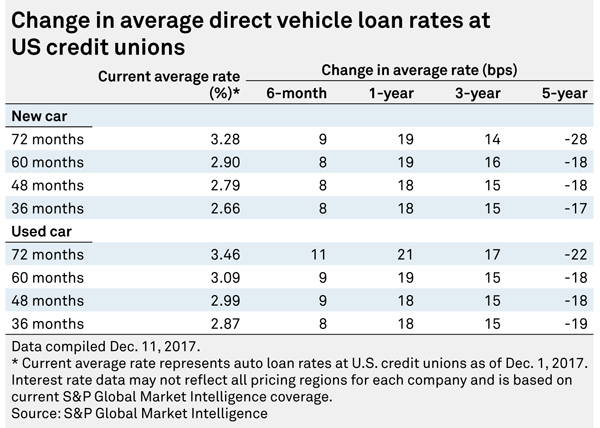 This article originally appeared on S&P Global Market Intelligence’s website on Dec. 12, 2017, under the title, "US credit union auto lending grows but so do delinquencies"