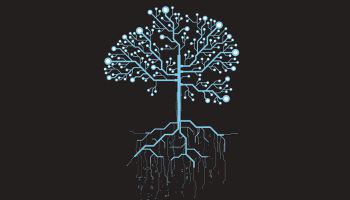 This is the second in a series of reports from Future Forces In Banking 2018. The study is a collaboration between CS Consulting Group, CenterState Bank, and Banking Exchange.

The great bank branch retrenchment is working its way downstream—gradually.

As The Wall Street Journal reported recently, branch closings accelerated sharply in the 12 months ending last June, with the biggest cuts coming from regional banks in urban and suburban areas.

The situation with community banks is less clear, and, possibly, conflicted.

A series of questions in the survey of community bankers asked about their plans for changes to branch networks in the next two years, and about changes to technology budgets in the year ahead.

The responses, taken as a whole, indicate something of a contradiction.

As the chart below shows, just over a third of the respondents anticipate growing their branch network over the next 24 months. That figure is up from 26% who expected to increase branches in 2015, the first year of the Future Forces survey.

Further, 53% plan no change to their number of branches. 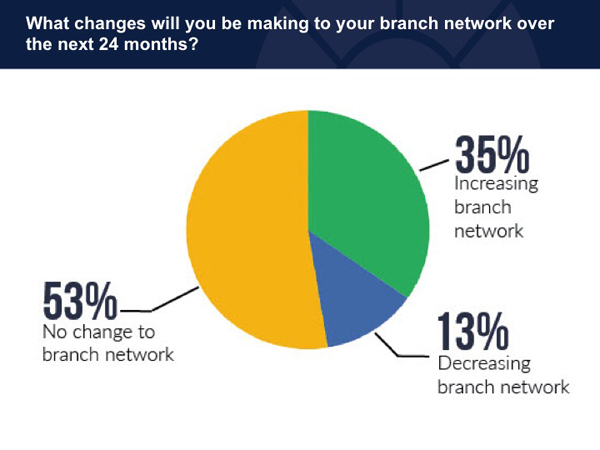 Here’s the apparent contradiction: Respondents were also asked to compare their institution’s technology budget for 2018 versus 2017. As the bar chart below shows, 89% report tech spending will be higher—about one third of that expected to be “significantly” higher (greater than 6%). Banks above $1 billion in assets were more likely to significantly increase their tech budget for 2018. 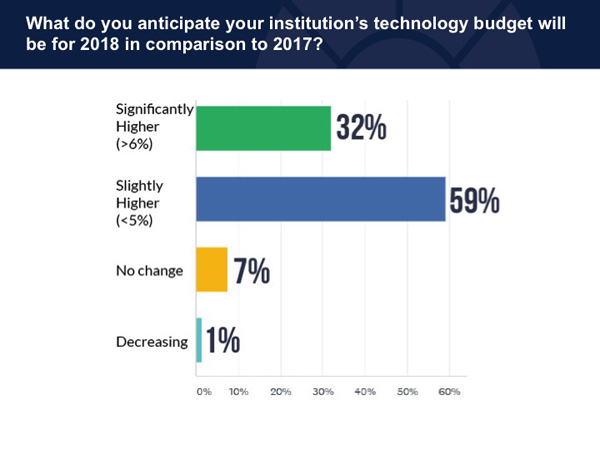 The picture overall is that of a large segment of the industry for which branches remain an important delivery channel, yet which also recognizes the need to stay current with rapidly changing technology—some of which works to reduce the need for branch visits.

Hedging their bets on branches

The details behind the overall numbers suggest that perhaps the situation is not so much a contradiction as an evolution, combined with a hedge.

For example, the 270 respondents—94% of whom come from banks and 82% of whom are either executive or senior managers—were asked what changes they were making to existing or new branches. They were also asked what technology projects they are working on.

In regard to changes relating to branches, 61% of respondents plan to emphasize service and sales over transactions—a familiar and ongoing trend as more and more customers handle transactions at ATMs or on mobile devices. Interestingly 84% of the bankers indicated—in answer to the tech budget question—that their mobile banking projects were already “completed.”

• Half the respondents plan to employ a universal banker model in their branches.

• About half are shifting to physically smaller branches.

• Self-service, in-branch video was an addition being made by a quarter of the respondents.

Priority tech projects for this year

Respondents were asked to classify the status of ten distinct technology projects in one of these terms: “Completed,” “Currently working on it,” and “Planning to work on”—the latter meaning planning to work on in 2018.

In the “Completed” category, mobile banking, mentioned above, came in with the highest percentage at 84%. It was followed by “Enhancing BSA/fraud compliance” (44%) and “Payments” (43%).

Of the projects that bankers listed under “Currently working on it,” cybersecurity, not surprisingly, was the area most cited for upgrade this year at 65%. Not far behind were “Onboarding/digital account opening” (55%) and “Lending platform/loan processing” (52%). Forty-five percent also said they were currently working on a data warehousing project.

“Planning to work on” AI

Despite a great deal of media attention and many conference presentations, use of artificial intelligence for marketing, credit, fraud, or other applications remains in the “Planning to work on” stage for 70% of community bankers, based on the survey results.

Two less exotic—though not simple—tech projects also had significant numbers of bankers looking to begin implementation sometime in 2018 or beyond: “Core conversion” and “Cloud infrastructure.” Both saw 46% of bankers peg them as “for the future.”

The final installment of this series reporting on the findings of Future Forces in Banking 2018 will cover: Regulation in the future, economic outlook, and biggest opportunities.

Read part one: “Community banks: ‘Yes, we need to change’”