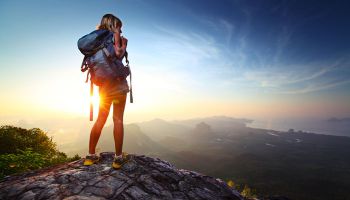 “When you go to a restaurant, no one forces you to tip.”

Of course, some people don’t, although most leave something.

Which is pretty much what happens at Aspiration, an online financial firm formed in 2015 that provides online checking accounts and an investment fund.

Andrei Cherny, co-founder of Aspiration, made the above comment about tips in reference to the company’s fee policy. The company uses a “Pay What Is Fair” model on both its banking and investment products. Customers decide what to pay using a slider on the company’s website. They can even pay $0 if they so choose.

“The vast majority of our customers choose to pay,” says Cherny, and 10% of earnings are earmarked for charitable contributions to several causes, including the Sierra Club. Cherny and co-founder Joseph Sanberg started the company with a business plan to appeal to people who had lost faith in traditional banks during the financial crisis and afterward. The company’s promotions typically target “Big Banks.”

The company’s insured deposit products are actually offered by Radius Bank, a $1.1 billion-assets online bank based in Boston that raises deposits through multiple online channels and partnerships.

All products are provided with the understanding that they are going to be provided sustainably and in a socially responsible way. One of the newer features of the checking account—AIM, or Aspiration Impact Measurement—is a tracker called “Sustainability Score” that tells the account holder how socially responsible their spending is, based on who they pay with their accounts. (The mobile app tracks the account holder’s impact on both Planet and People.)

Cherny refers to this as “spending with a conscience.”

The company’s Redwood Fund is designed as a socially responsible investment vehicle. Among its investment rules is the proviso to be 100% fossil-fuel free and 100% firearms free.

The company maintains a very active social media presence, including efforts on Twitter, Facebook, and YouTube. Aspiration took on Bank of America during the Valentine’s Day holiday, when it invited the public to #breakupwithBofA. This came in the wake of the megabank’s decision to end an e-banking account that provided free checking. Aspiration’s promotion included $12 one-time account credits to BofA customers who switched to Aspiration’s Summit Account, its checking offering.

The checking account pays 0.25% APY on balances up to $2,499, and 1% APY on deposits beyond $2,500. The account permits fee-free use of ATMs anywhere in the world—some can be used free from the get-go and others will charge fees that Aspiration will refund. (The company has no branches.) The company also offers retirement accounts now.

Management has found that the appeal of the pay what you like/socially responsible business model resonates with more people than one might guess.

Cherny says that the company’s base is very diverse, with customers coming from all over country, not just concentrated in major cities. He adds that 60% of the customer base consists of people 35 or younger. He says that’s to be expected, as the bank is wholly accessible via technology and younger people are most comfortable with that.

With a proposition like Aspiration’s checking account, a natural question is if the company receives any complaints.

“We don’t claim to be perfect,” says Cherny. “Technology can sometimes have a bug. We have a passionate customer base—and a vocal one.”

Nerdwallet gave the account a 4 out of 5 late last year, giving it kudos for its interest rates, fee policy, and ATM fee reimbursement. A Better Business Bureau online rating came in substantially lower, but that appears to be skewed due to a couple of very negative responses in a small base of comments.

Other financial rating and comment sites—discounting some on the wilder side of the internet—have happy raves about the company’s banking services as well as angry raving about unhappiness with them.

Cherny isn’t exaggerating when he says customers are “passionate.”

Given the company’s positioning as improving on what traditional banks do, and promising a relationship of trust, “this puts the onus on us to be sure we’re delivering,” says Cherny.

Having come this far, in a time of major disruption and talk of bank charters for fintechs and such, would Aspiration consider applying for a charter at some point?

“That’s not something we’re pursuing at this point,” says Cherny. Right now, he adds, “there’s a lot of regulatory uncertainty in that space.”

“What we’re focused on right now is relationships with our customers,” says Cherny. The Marina Del Rey, Calif.-based company raised $47 million in a December “Series B Round” of investments, adding to its development resources. All told at this time the company has over 200,000 accounts and it says it is adding 1,000 new accounts daily.