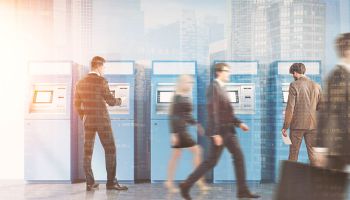 Schmid, 49, was with D+H in various capacities for ten years. He was CEO of the Toronto-based bank technology company for about five and a half years, overseeing a series of acquisitions to broaden its scope and reach, notably Mortgagebot in 2011 and Harland Financial Solutions in 2013.

Schmid left the company upon its acquisition by Vista Equity Partners in June of 2017. Vista combined D+H with Misys, a London-based company it already owned, and rebranded the resulting company as Finastra.

Beginning in October 2017, Schmid was briefly a senior advisor at The Boston Consulting Group, a position he relinquished upon joining Diebold Nixdorf.

According to his LinkedIn resume, Schmid spent a little over a year as director of transaction banking for Lloyds TSB Bank beginning in 2006. Prior to that he held two posts at Toronto-based CIBC, including COO of the Canadian bank’s retail operation.

In a statement released by Diebold Nixdorf, Schmid said, “I am honored and excited to join the global team at Diebold Nixdorf at this important juncture. The company's rich history, global leadership position and broad customer base, provide fertile ground to drive opportunities in the financial and retail industries. I will look to leverage these advantages to improve financial performance, deliver value for customers and shareholders and create opportunities for our employees.”

Diebold Nixdorf is the largest manufacturer of ATMs worldwide according to RBR’s Global ATM Markets and Forecasts to 2022 report. Sales of ATMs in 2017, however, were lower than the previous year and were not the largest segment of the company’s business, according to yearend company data.

Systems revenue, which includes ATM sales, declined 12% year over year, with lower volumes across all regions. Reporting on comments of then CEO Andy Mattes during the company’s third-quarter earnings call, Suzanne Cluckey wrote on the ATM Marketplace website that “the pending Windows 10 upgrade has dampened regional and community bank spending on ATMs—probably until the second half of 2018—while FIs figure out an implementation plan.”

The largest segment of Diebold Nixdorf’s revenue in 2017 was services, which, along with software increased year over year. The gains, however, were not enough to offset the decrease in systems. Total revenue decreased 8%.

In conjunction with his appointment, the board granted Schmid options, performance share units, and restricted stock units as a material inducement to his hiring, according to a company press release.

Diebold Nixdorf, Inc., does business with nearly all of the world's top 100 financial institutions and a majority of the top 25 global retailers, and has a presence in more than 130 countries, the statement said.