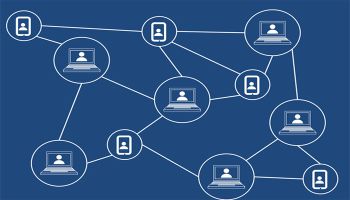 Community bankers have begun taking steps to not be held back so frequently by their traditional tech vendors' schedules.

“If it works, don’t fix it” is a luxury community bankers can no longer afford.

Now, not only fixing it, but adding to it and hooking into other providers’ tech grows increasingly critical.

“Anybody who doesn’t believe that is kidding themselves,” says James Beckwith, president and CEO at $972.8 million-assets Five Star Bank in Rocklin, Calif.

The attractiveness of tech-based marketplace lending, for example, is only going to increase, Beckwith says. Also, payments innovations, going on inside and outside banking, can’t be ignored by consumer or business bankers.

Community bankers frequently complain that they are at the mercy of their core tech providers. They can advance only when these vendors say so.

The good news: Community bankers have been taking steps to counter such competitive challenges on the tech side.

At $835 million-assets Bank Midwest, Spirit Lake, Iowa, Mary Kay Bates, president and CEO, says her institution saw the advances being made in P2P payments and more. 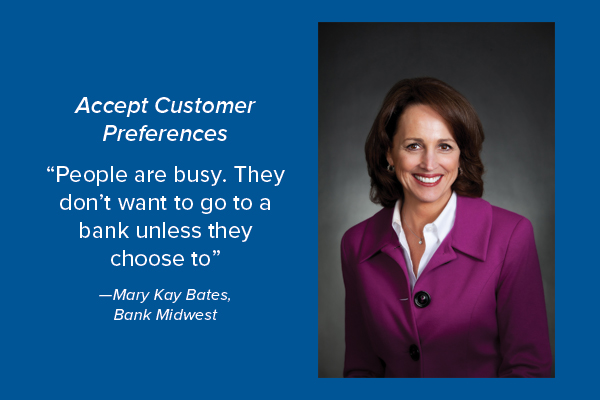 It became frustrated with its major core provider’s speed to market and decided to switch. Its new core vendor provides open architecture (or “open API” for application programming interface), allowing Bank Midwest to choose third-party services, which will enable it to offer the delivery options customers want on a timely basis. She says demand goes far beyond millennials: “People are busy. They don’t want to go to a bank unless they choose to.”

At $212.6 million-assets Lead Bank, Kansas City, Mo., CEO and Vice-Chairman Josh Rowland has been taking two major steps to increase tech agility. He says that to think of fintech as a distraction means fobbing off “societal change that we ignore at our peril.”

The first step: working with a vendor, INV Fintech, an incubator and accelerator that has a connection with Fiserv.

“We know that we can’t wait around for a big bank to ask Fiserv for what they want,” says Rowland. INV Fintech develops applications meeting current customer demand that work with the bank’s Fiserv platform. 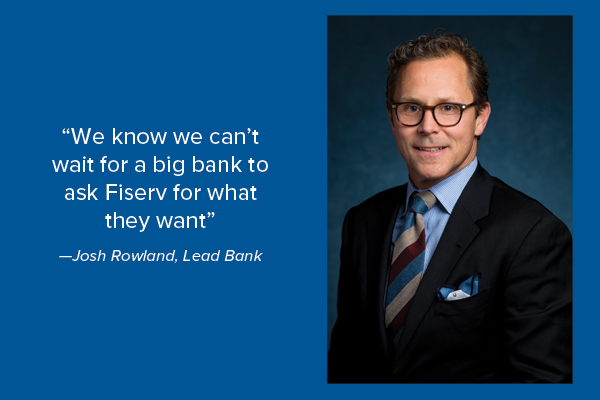 The second step, still in development: partnering with Hyphen Funding to produce Lead Bank’s own answer to marketplace lending. Rowland hopes to use this capability to counter the threat of Kabbage and others.

Beckwith, also believing that marketplace lending must be taken seriously, has begun working with SmartBiz, a fintech that works with banks to set up such lending, rather than competing with banks. He believes that it is only a matter of time before marketplace players enter CRE lending.

This is a companion to the main story, "Rethinking community banks' future"