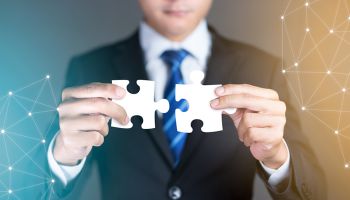 Putting together bank deals today has more dimensions than a jigsaw puzzle.

Different forces have been influencing the various sectors of financial M&A, but math remains math. You can think creatively in the deal space, but you can’t defy physics.

For example, among community and regional banks, consolidation continues on the basis of the quest for efficiency. These tend to be bread and butter deals where the intent is to produce larger, more efficient players, according to Scott Carmelitano, U.S. banking and capital markets deal leader for PwC.

But there’s no magic in the merger process where efficiency is the goal, Carmelitano says.

“If you take two banks with bad efficiency,” he explains, “and you put them together, you get one bank—with terrible efficiency.”

Pace of deals up

The firm’s U.S. Financial Services Deals Insights report for the first quarter 2018 notes that these basic deals have been buoyed by factors such as favorable stock prices that increase buyers’ currency as well as an atmosphere of regulatory easing. Many of the first quarter deals in the banking sector consisted of such mergers, most with deal values of below $500 million.

Carmelitano and Greg Peterson, U.S. financial services deals leader at PwC, indicated in an interview with Banking Exchange that while enthusiasm for mergers has picked up, a focus on essentials remains.

For example, Carmelitano said that companies considering mergers have been paying close attention to the composition of the loan portfolios of the resulting organization before moving ahead. Concentrations and other factors will be looked at. Carmelitano said that the implementation of the upcoming “CECL” accounting standards regarding loan losses won’t determine whether a deal gets made, but the new approach could affect deal pricing. Peterson said that dealmakers have been paying close attention to deal pricing, even though currency has become more plentiful.

Financial measures aren’t the only factor being considered. Carmelitano said that the digitalization of banking has been a factor in matchmaking. Potential partners look closely at how digital the other party is, and how their physical footprint and digital platform look. He explained that bankers are still feeling their way on this in their own banks, so it’s important when considering a deal.

Carmelitano said the digital influence plays a part beyond the immediate strategic fit of organizations. Larger players especially have focused on growing their share of the mass affluent market in recent years. They have looked for ways to find synergies and to increase cross-selling to these customers.

Carmelitano says that digitalization holds out some promise a lower-cost way to reach further down the income chain. So the potential for combining that capability with a merged customer base is also a factor in deals.

With major developments occurring on multiple fronts in the business, “there are many pieces to consider and people are trying to figure out what will work best,” says Carmelitano.

A related question is the role that fintech companies will play in M&A. They have changed the nature of bank strategic planning in the last decade. They have partnered here and there with banks, and some have been bought by banks. But the PwC experts are skeptical of fintechs buying banks.

One factor is managerial. Fintechs can be very complex by their nature, but they will tend to be highly focused, Peterson said. Banks, especially those beyond the community banking league, tend to be broad in scope and fintech managers may not have the skills to run such a large, diverse acquisition. And as the economy begins to shift, he added, fintechs with deposit-related specialties may face specific headwinds.

The other major factor comes down to capital. Fintechs frequently are magnets for venture capitalists and investors in subsequent funding rounds, but even these streams of funds don’t come close to the capital that it takes to buy into big banks.