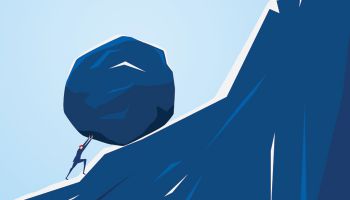 The smaller they are, the harder they have to push.

How much does your bank spend on regulatory compliance?

A recent Fed district bank study found that community bank compliance costs averaged 7.2% of non-interest expense. While significant by itself, that average hides a trend with significant implications—but let’s not get ahead of the story.

Indeed, in an analysis of S. 2155 on BankingExchange.com by Zach Fox of S&P Global Market Intelligence, “Still engulfed by regs,” the writer states:

“For smaller banks, the relief appears more modest. Some of the law’s provisions meant to ease regulatory burden will have little impact for a simple reason: Small banks were already exempt. Provisions, such as qualified mortgage status for loans held in portfolio, higher leverage at bank holding companies, a lengthier exam cycle, and a shorter call report, were already available to banks with less than $1 billion of assets.”

And that makes the findings of a Federal Reserve Bank of St. Louis study about community banks’ regulatory costs especially interesting.

For those who predict that compliance costs will continue to encourage consolidation at the small end of the industry spectrum, the study provides more evidence.

• Economies of scale exist in compliance.

Many forms of compliance have incremental costs—suspicious activity reporting, mortgage transactions, etc., cost more with increasing volume—but the ongoing fundamental systems costs and the costs of keeping current apply to all institutions.

In the 2017 survey results, based on 2016 numbers, BSA expenses dwarfed all other compliance costs, with the exception of those related to RESPA, TILA, and Regulation Z. This is interesting because Comptroller of the Currency Joseph Otting, a former banker, identified BSA costs early on as a priority. While banking agencies can’t directly change the rules, Otting has spearheaded efforts to discuss these issues with the agency that does, the Financial Crimes Enforcement Network, or FinCEN.

As the exhibit below indicates, mortgage-related rules would supplant BSA as the leading categories if the RESPA, TILA, and Regulation Z, Qualified Mortgage, and Ability to Repay rule bar were combined into one, totaling almost 36%. 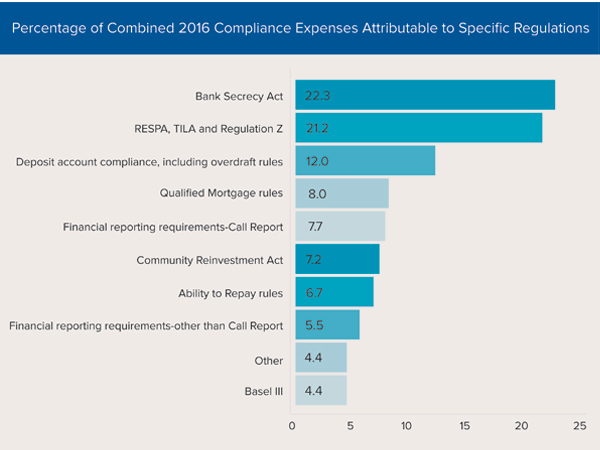 The study found that this was followed, in order, by data processing, accounting, consulting, and legal expenses. The report states that personnel costs—coming to 5.1% of average non-interest expense—represent almost seven times more than the other four categories combined. 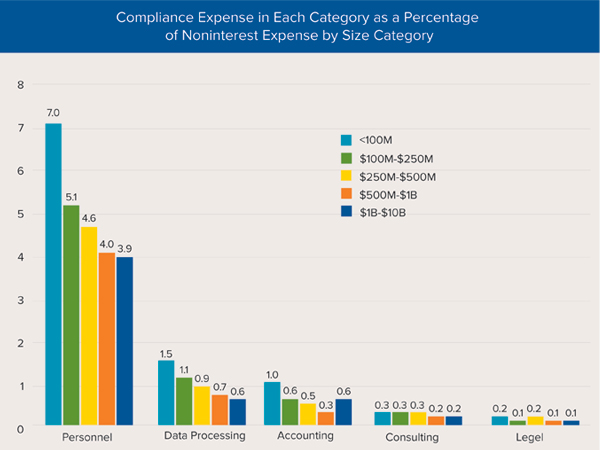 • Compliance spending and compliance ratings bear little relationship to each other.

For this analysis, the researchers looked at both compliance ratings and the M—for management—component of the CAMELS ratings, which includes consideration of the management and board oversight of the compliance function. 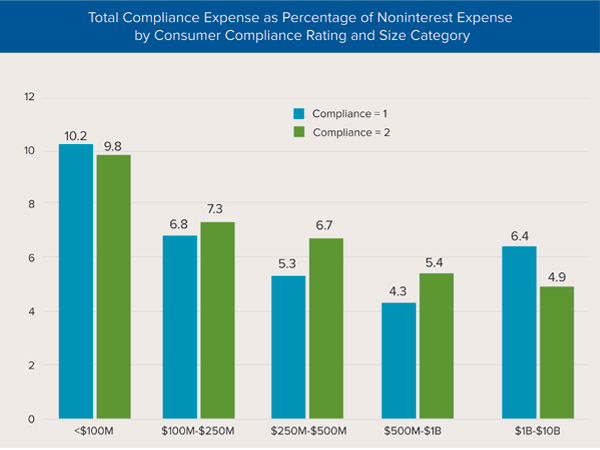