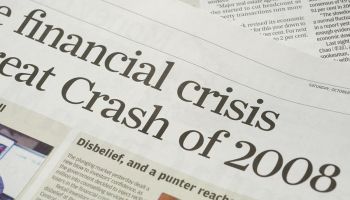 Last month, we “commemorated” the 10th anniversary of the 2008 financial crisis and its focal point: the fall of the storied investment bank Lehman Brothers. In some respects, it’s hard to believe it’s been 10 years since the banking and financial services sectors imploded, sending the global economy into the Great Recession.

A decade on, do we need to brace ourselves for another near-term crisis?

While I believe that banks and other financial services firms will never make the exact same mistakes they made in 2007-8, we should “never say never” when it comes to another downturn.

Bankers must ask themselves the following questions in order to remain vigilant:

How can we keep organizational memory alive?

In 2008, the length between crises outlasted the average career of a banker. So, relationship managers didn’t fully understand the pain of too much risk. Today, there are many bankers with feet on the street who remember first-hand the tragic outcome of 2008 and thus have more skin in the game. It’s important that banks place an emphasis on teaching the history of the crisis within their ranks. Every relationship manager, from junior to senior, should understand that they have the ability to influence not only the health of their bank, but also the broader economy.

Are we adequately isolating risk?

At the peak of the downturn, the regulatory environment was ripe for the spread of a “contagion.” Banks were too focused on growth and the regulatory measures in play weren’t conducting adequate checks and balances. When Lehman went down, they were counterparties to all sorts of other folks—creating a domino effect of jeopardy (and disaster). And when the crisis actually hit its peak, the governance systems in place at that time had no mechanism for surrounding the problem—or inoculating it; that led to the swift spread of the “disease” of the crisis.

Today, banks put tremendous effort into counterparty risk and trading partner risk. And because of this, they’re able to isolate problems so they don’t spread and wreak havoc on the entirety of their bank (and the financial system). Banks are essentially saying, "Here's the part of you that isn’t too big to fail that we're darn sure going to protect ourselves from." They’re firewalling their most critical functions. It’s imperative that this intense protectionism remains and that complacency doesn’t take hold.

How do we get comfortable with mitigating risk?

In ‘08, very few banks understood risk-based profitability in terms of returns on capital, and how capital is impacted by risk. They really thought of risk and profitability from a transactional standpoint, and as if the regulations were just words. But like safety instructions, regulations have meaning. They’re there for a reason. If unheeded, people hurt themselves or others.

After 2008, banks zealously sought to eliminate risk. But avoiding risk entirely makes pricing deals accurately virtually impossible. If you're a bank or a financial institution of any kind, it’s very clear: you mitigate risk wherever possible; you manage it; and you diversify it. Ultimately, though, you need to get paid for risk, because you can't get rid of all of it. Banks need to continue to take calculated risk in order to retain their rightful profits.

How do we strike a balance between risk and growth?

Pre-crisis, the pendulum swung toward growth. CEOs were getting fired for not growing the bank quickly enough—and for not doing what competitor banks were doing. So, not that surprisingly, most banks got caught up in the swirl of growth at all costs. Which, as we know, did not end well.

Today, the pendulum is biased toward risk reduction. Though I do believe it’s swinging back toward growth. But the “risk” guys have that organizational memory and they’re not letting go. So there’s a focus on discussing how banks can: be aware of the risks they’re taking, price for risk, structure for risk and also get paid for the appropriate amount of risk they’re taking. My belief is that both growth and risk advocates should have their hands on the wheel—the economy needs that balance.

How do we check ourselves for “The Gambler’s Mentality?”

In 2008, banks were like gamblers who hadn’t lost in a long stretch. They were on hot streaks, so they bet more, and then they won more, because they bet more. Their losses were even lower as a percentage of their winnings, so they felt even luckier. They were operating on quarter after quarter of no losses, and thus pricing deals lower and lower. Pro cyclicality took hold for the positive: asset prices, home values and commercial real estate values all went up. It was all good—until it was horrible. Banks were forced to pull back on lending, which created a negative feedback loop, and the crash. Ultimately, this was the genesis for the development of the CECL accounting standard, ensuring that instead of banks doing a feedback loop based on the past, they’ll focus on future projections. It remains to be seen how CECL will play out, but its intentions are good.

The chance of us having an event just like 10 years ag—a huge, disruptive, fat-tail event like that—is unlikely in the foreseeable future. In 2008, there was a whole series of things that were missed and some other things that acted as lighter fluid on a compounding problem, which ultimately blew up. The industry was adequately admonished, and did learn its lesson. But memories can be short. A great understanding of the missteps of the past will ensure history doesn’t repeat itself.