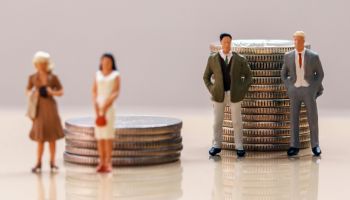 Following the CITIGROUP disclosure on median gender gap data at the bank, Bank of America and Wells Fargo will soon vote on a shareholder resolution to disclose similar information. This news comes after the SEC rejected any grounds the banks might have to block such a vote.

The vote will likely take place in the annual shareholder meetings for each company this spring, urging disclosure of the data. The objections from bank management were that it was up to management to decide if information would be made public and that measures such as this set a bad precedent as to allowing for sharholders to micromanage the process of running the banks beyond a reasonable measure. The two banks are not the only institution fighting the measures, although some banks are planning to volunteer the data. Mastercard also plans to challenge the need to disclose the information in front of the SEC.

Earlier this year, Citigroup agreed to be the first major bank to disclose gender gap data.

Arjuna Capital’s managing partner Natasha Lamb said: “The SEC continues to uphold investors’ right to weigh in on gender pay equity, asserting the significance of the issue for US companies. We are both encouraged by the SEC’s consistent position on gender pay equity, and discouraged that companies like Bank of America and Wells Fargo continue to take such a defensive posture.  Releasing median gender pay gap data creates a baseline from which to make improvements, and the research bears that out. We hope companies take a more proactive approach toward gender pay equity going forward. But it won’t happen without bold leadership.”

Both Bank of American and Wells Fargo also argued that risks related to recruiting and retaining talent is not related to gender pay equity and providing opportunities for career advancement into higher paying jobs. Several other banks and financial services companies are taking the initiative to disclose any pay gap data.