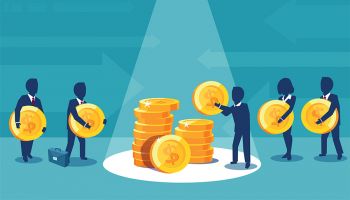 We’ve been talking about asset management—which we’ve classified as the management of corporate and institutional investments—and how its very structure has been changing, largely due to innovative and disruptive technology. The first article on this topic circumscribed the rise of asset management in the latter half of the last century and how it enjoyed a 40-year window of unparalleled growth, disrupted finally by economic upheaval and the upsurge in consumer demand, technology, and especially data.

How the free flow of information and data caused a leveling of the asset management market was laid out in the second article in this series. Where we left our discussion was pointing out that the industry has barbelled, with megalithic asset management firms and tiny boutique firms, which are doing well, squeezing those firms in the middle. We also discussed the shift from alpha to beta returns.

Here too the industry has experienced massive shifts, from defined benefit pensions toward defined contribution pensions. While much has been written in protest against this change in the U.K., decrying companies that, “through their own greed, selfishness and regulatory incompetence have systematically raided workers’ employer’s defined benefit pension funds,” a similar trend has been playing out in the U.S. over the past 20 years.

Defined benefit plans, originally created to ensure the financial stability of Revolutionary War veterans into their old age, increased in popularity throughout the U.S. with the growth of labor and the industrial revolution. These plans had the effect of placing the responsibility for investment decision making (and thus the pension fund’s growth) on the employer, leaving the employee untroubled about where the money was going to come from once he or she retired, how the money was invested, how it grew, and so on.

Well, that has all changed. As alluded to previously, with the dot-com bubble and other market shifts that made it far more difficult for all investors, including asset managers, to realize alpha—above-market profits—on their holdings, companies and institutions allowed their pension funds languish and even, in some cases, having to inject additional money into them—more than 2/3 of the 360 companies in the fortune 500 that had defined benefit plans had to inject cash to prop up their pension funds at the end of 2002. Along with companies underfunding the plans, the workforce that was supposedly being financially protected was aging in great numbers, and suddenly companies were finding it difficult to pay out all of these supposedly worry-free pensions. As soon as the unsustainability of defined benefit plans began to become obvious, corporations and institutions began switching to defined contribution plans, which were far less expensive for them to keep up and manage, with benefits typically being much lower than the defined benefit plans had been. Suddenly there was a lot that the employee had to worry about.

Defined contribution plans essentially put the weight of choice on the employee, in addition to requiring a co-contribution along with the employer’s now much lower one. Employees are required not only to contribute actively to their own retirement fund, but to choose how their money is invested. In this new defined contribution scheme, people have to take more ownership and control of their financial lives and their future.

Suddenly Everyone Has To Think Like An Asset Manager

The outcome of this shift to defined contribution pension plans has been that employees feel both more insecure—as their pensions have been reduced to a fraction of what their parents once realized—and more empowered to act in their own behalf vis à vis their investments. At the same time, technology has expanded their view into what is possible, and has opened the door to the FinTech explosion we’re now seeing. We’ll discuss consumer-facing fintech investment tools at another time, but now I’d like to talk about several factors that have heightened this shift from direct benefit to direct contribution pensions, putting more onus on individuals to look after their own long-term financial health.

The first factor is that institutional markets have become more saturated. With the barbelling of the asset management industry, it has become more difficult for all but the largest firms to consistently win assets under management. This trend is turn was exacerbated by historically low interest rates following the financial crisis, which served to move people from savings into investments. Suddenly everyone—or at least anyone who wasn’t content to let their money sit accruing 0.05 percent interest in a conventional savings account—was a player in the market.

While investing in other assets such as stocks or funds came much higher risk of losing it all, it also came with the promise of making a much higher rate of return than a savings account could deliver. This also meant that all these employees-turned -investors could no longer afford to sit back while their money grew. At the very least, they had to play a deciding role in how the funds were managed, as well as keep track of, those investments in which they were choosing to participate.

In the U.K., this new system of practically unlimited choice was actually legislated, in 2015, with the so-called Pensions Freedom ruling. This implied that even during retirement, people over 55 could take control of their own investment decisions, meaning they could take their money out of their pensions and invest it elsewhere. Since the financial crisis, the housing boom has stalled and as a result, especially in the U.K., the investment rental property market has cooled down.

Simply put, people are seeking to invest their money elsewhere. In my company, though the vast majority of our assets are held and managed for corporate or institutional clients, we are waking up to the recognition that this new retail market is going to be a massive growth opportunity—for everyone in the industry.

Consider the demographics: Baby Boomers are starting to either pass on their wealth or die and provide inheritances. They hold a disproportionate amount of wealth compared with younger generations. Those who benefit from these inheritances often look to invest it. The problem is that many people—I would venture to say most people—are financially illiterate or lack the confidence to make riskier or longer-term investment decisions, meaning that they could benefit from advice.

In the U.K. there is an “advice gap” where there are not enough advisors to go around, and most of them are in their late 50s and will be exiting the industry in the next decade or so. In both the U.S. and the U.K., there is a perception that financial advisors are unaffordable to the lay person on the street. And so, with more younger, tech-savvy investors coming online we’ve seen the rise of robo-advisory services.

The importance of data’s role in all of this cannot be overstated. To date, many big investments have been based on intuition. But with the emergence of big data, there is the chance to engage in more passive, but still rational investing, where it’s possible to track a particular market. In order to do algorithmic trading or active investing of any kind, you need to have very sophisticated technology, something only the largest firms can afford. Data is king: the more data you have, the more insights you can derive from it. In asset investing, because the market grows slowly, companies need to achieve economies of scale to make a profit.

Enter the investment apps. In the last couple of years, the emergence of robo-advice apps and other wealth advisory platforms such as Nutmeg and Acorns has provided ample evidence of this movement in the market. Consumers—all those employees who now have control over their pension funds and retirees who are recalibrating their golden year nest eggs, as well as those who are inheriting them—are making major shifts away from intermediaries toward these platforms. However, nearly all of the fintechs are struggling to be profitable, as none of them has reached a critical mass where economies of scale can kick in. Nutmeg, for example, will soon be crowdfunding another raise to help with their growth.

It is little wonder, then, that we’re seeing the biggest asset managers investing in and/or acquiring these platforms. It helps them gain assets under management, and simultaneously gain the valuable customer insights they typically lack. Here is the crux of the opportunity for the industry: all these wealth advisory platforms that have been springing up over the last few years are slowly being altered by asset managers. It may be the industry’s key chance to gain back some control.

Next time we’ll take a closer look at some of the specific wealth management fintechs and how they are operating innovatively in a changed marketplace.

About the Author: Martijn Moerbeek is group director of Digital Strategy & Innovation at Legal and General, a forward-looking, UK-based financial services and insurance firm managing over $1.4 trillion in assets. He can be reached at [email protected]