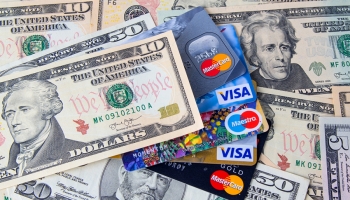 The global cards and payments market is expected to grow by more than 8% a year over the next three years – driven in part by measures taken to combat the spread of the COVID-19 coronavirus, according to a new report.

The Business Research Company’s study found that the global card and payments market reached $721.9 billion last year and is expected to grow to $999.3 billion by 2023.

The report said the pandemic was having “a major impact” on the use of credit and debit cards, as several governments and the World Health Organization have urged people to use contactless payments instead of cash to avoid infections.

Transport authorities are also encouraging the use of contactless payment methods: The Port Authority of New York and New Jersey has moved to collect tolls only by electronic means at its bridges and tunnels.

In the UK, contactless technology has been used for several years. According to UK Finance, around half of all debit card transactions in 2019 were contactless. The UK recently increased its limit on contactless transaction from £30 to £45 in response to the pandemic.

The cards market is expected to gain $154 billion of global annual sales by 2023, the report said, with providers expected to expand and diversify their offerings in this area.

The Business Research Company’s report also stated that non-cash payments were expected to grow by more than 12% a year, driven largely by increased take-up of digital payments across emerging markets.

As card-based and digital payments grow, however, so does the importance of security. The research report highlighted security measures and innovations such as the Payment Card Industry Data Security Standard, EMV technology, 3-D Secure services, tokenization, biometrics and end-to-end encryption.

“Facial recognition payments are considered to be a promising future payment development that will give a high degree of accuracy and an added level of security for any type of digital payments,” the report added. Some branches of KFC in China already have this technology available.

“During these unprecedented and uncertain times with millions now at home, many consumers are going online to purchase products or services,” said Debbie Guerra, executive vice president at ACI Worldwide.

“Quarantine has changed lives for all of us, with consumers buying electronics and furniture – to support work, communication, school and entertainment – as well as items such as home goods and DIY products.”

ACI Worldwide reported that sales of garden “essentials” were up by 163% in March this year compared to March 2019, while DIY product sales were up 136%.

“Long term, we and others in the industry predict that the shift in consumer behavior – opting for online purchases – is likely to outlast the crisis,” concluded Guerra.

“The industry is well ahead of the curve in adapting payment methods and ways to combat fraud in response to the changing behaviors and expectations of consumers, which are now being expedited by the lockdown.”