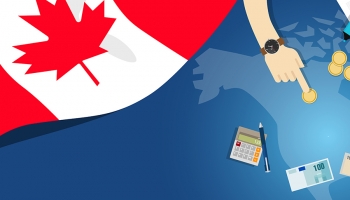 Canada’s banking sector is expected to be resilient through a probably economic contraction and spike in unemployment due to the COVID-19 pandemic, according to rating agency KBRA.

While the sector has a high exposure to the domestic housing market, KBRA said low levels of debt and government-backed mortgage insurers would support banks through the months ahead. In addition, a strong public health response to the virus could help its recovery, the agency added.

The rating agency estimated Canada’s unemployment rate hit 10% this month, while the country’s economy contracted by 8.2% in the first quarter on an annualized basis.

“Major Canadian banks have a high degree of resilience against the economic slowdown from COVID-19 and oil price pressure, even as these factors exacerbate the elevated level of household indebtedness,” KBRA wrote in a research note.

“In addition, the distinct structure of the country’s mortgage market and extensive insurance provided by CMHC [the Canada Mortgage and Housing Corporation] and private mortgage insurers go a long way toward insulating the banking system from rising risks in the housing market.”

Insured mortgages – typically making up the riskier end of the mortgage market – amounted to 25.7% of total outstanding household debt across Canada, according to KBRA and Bank of Canada data, equivalent to approximately C$640 billion (US$470 billion).

The C$55 billion CEBA program was rolled out by the Canadian government in April to provide loans of up to C$40,000 to small and medium-sized companies. A quarter of the loan is eligible for forgiveness if the balance is repaid by December 31, 2022.

As of June 15, more than 669,000 loans had been approved through the CEBA program, according to the Canadian Bankers Association, totalling C$26 billion.

“In our view, Canadian banks are part of the systemic solution and play a role in supporting their customers and the economy through this crisis,” KBRA said.

Financial results for the three-month period ending April 30, 2020, indicated that Canadian banks had increased loan loss provisions in line with their US peers, which hit earnings.