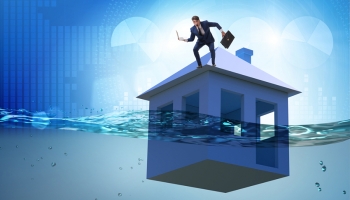 The Covid-19 pandemic has heightened default risk for US mortgages by as much as 40% during the first quarter of this year, according to new analysis.

The economic risk for Ginnie Mae loans rose by 80 basis points, or 33%, the actuarial firm reported.

“The lower quarterly default risk in the face of economic pressure is because, as interest rates continued to decline, less risky refinance loans offset an increase in default risk for purchase loans,” Milliman said.

“While we anticipate that the large number of unemployment claims will translate to an increase in mortgage delinquency rates, default rates – ie the number of borrowers that lose their homes – will likely not be as severe as during the global financial crisis thanks to the robust home price growth we saw over the past several years,” said  Jonathan Glowacki, co-author of the MMDI.

More than 4.75 million households across the US were reported to be in forbearance due to the pandemic, according to research by software provider Black Knight released in May.

The figure amounted to approximately 9% of all mortgages and just over $1 trillion in unpaid principal balances, with 93,000 added over the week to May 19.

Rating agency KBRA has previously warned that payment holidays, fee waivers and the temporary suspension of foreclosures were likely to only delay the realization of significant loan impairments.

Consultancy firm Accenture last week released a report urging banks to scale up their credit management facilities as soon as possible to ensure they are prepared to help clients manage repayment difficulties.

US banks have already begun stockpiling cash reserves in anticipation of a significant increase in loan defaults and repayment issues.

JP Morgan Chase, Wells Fargo, Citigroup and Bank of America have set aside provisions totalling $57 billion, according to analysis by the Financial Times. Earlier this week, HSBC reported that its provisions for bad loans – amounting to $6.9 billion, with more expected – had all but wiped out its net income for the second quarter.

However, with several companies having suspended share buybacks since March – and the Federal Reserve banning them for the third quarter of 2020 – US banks have been able to raise provisions while still recording healthy revenues.