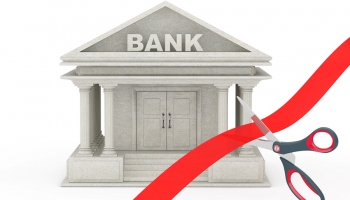 A number of US banks have announced plans to open new branches or acquire existing premises as they build for the future.

The team will be led by Greg Hodges and will focus on offering “a complete array” of business lending products and services, the bank said, as well as digital banking and treasury management services.

“M&M Bank has been serving Southern Mississippi since 1898, and we believe the time is right to establish a presence in Hattiesburg,” said Clayton Legear, M&M Bank president and CEO, said “the time is right” for his bank to enter the Hattiesburg market.

“While this year has certainly had its challenges, M&M Bank has chosen to focus on strategic opportunities that will position us for future growth,” Legear added.

Earlier this year, M&M Bank announced a plan to acquire an office in western Mobile, Alabama. The bank already has 13 full-service branches across the Mississippi and Alabama Gulf Coast area.

Meanwhile, Georgia-based SouthCrest Bank has agreed to acquire a branch of Colony Bank, bringing on board approximately $40 million in deposits and $3 million in loans.

SouthCrest has nine branches across Georgia, with a particularly strong market share in Thomaston – where the Colony Bank branch is based – and Upson County.

The transaction includes the option for SouthCrest to purchase the building in which the branch office is based. It is expected to close by the end of this year, subject to regulatory approval.

Heath Fountain, president and CEO of Colony Bank, said: “Decisions like these are never easy or taken lightly. We have enjoyed serving customers in the Thomaston area for over 16 years, and we are very grateful to have had the opportunity to do so.

“However, we are continuously reviewing our branch network to ensure that all branches operate in the most efficient and cost-effective manner possible. Thomaston is a great market, but it does not fit our current strategy of operating in markets where we can compete against larger regional and national banks.

“SouthCrest Bank is a full‑service, locally based community bank, and we are confident that our Thomaston customers will be well served.”

Elsewhere, Community bank Woodforest National Bank has expanded its presence in North Carolina with a new branch in Kannapolis.

The new premises is the bank’s 93rd in North Carolina, according to Julie Mayrant, president of Woodforest’s retail division. It has “a full range of banking services for consumer and business customers”, the bank said.

Separately, Old Point National Bank has opened its first commercial lending office in Richmond, Virginia. The new team is to be led by Philip Hager and will serve the greater Richmond market, the bank said in a statement.

Old Point chairman and CEO Robert Shuford, Jr said the new office was a “natural next step” for the bank. “We have been funding commercial transactions in the Richmond area for a few years now,” he said. “That, coupled with Richmond and Hampton Roads coming closer together as a market as interstate 64 improves, has led to the natural next step of having a dedicated team serving the area.”

Finally, Heritage Commerce Corp and its subsidiary bank, Heritage Bank of Commerce, have moved their head office to a new location in San Jose, California.

The bank, which primarily serves the San Francisco Bay Area, announced on September 8 that it had also moved its San Jose branch office and its Bay View Funding subsidiary to the same new address: 224 Airport Parkway, San Jose.

“Our new San Jose headquarters facility allowed us to consolidate many different operating areas of the bank into a single location to better support our customers, community partners and the entire Heritage organization across the region,” said Keith Wilton, president and CEO of Heritage Commerce Corp and Heritage Bank of Commerce.

“We remain committed to serving the Greater Bay Area community from the heart of this great city. While our San Jose branch is open at the new location, once the current health restrictions created by the pandemic are lifted, we invite our many customers and friends to come by and see the whole facility.”