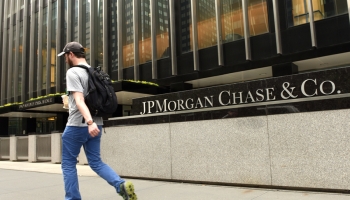 This week, JP Morgan Chase surprised analysts buy beating earnings estimates both on revenue as well as profit. The profit for the global banks was a surprisingly high $9.44 billion which amounted to $2.92 per share, well beyond the $2.23 the street was expecting for third quarter. The profit was not made on cuts either, as the top line was a stunning $29.94 billion.

Loan defaults was the major concern for the markets, which would effect American banks of any size. The concern due to the pandemic turned out to be a small issue, at least thus far, as the stock rose almost 2% on the news. JP Morgan Chase is the biggest United States based bank based on assets. The bank reduced loan-loss reserves by $569 million just in the third quarter contrary to the first two quarters where it had $15 billions to loan loss reserves. A number of analysts found this to be the biggest surprise to the the quarterly earnings report.

Jamie Dimon did mention, however, it was important to keep reserves as the pandemic still is of major concern as he stated “significant economic uncertainty and a broad range of potential outcomes”. Concern over small to midsize business default still play in the minds of bankers as some are concerned the worst may still be to come in 2021 as some businesses were able to hold on for a time but may not turn the corner.

Large banks have also benefited from trading due to volatility and the Federal Reserve’s actions to help credit markets, something that has also helped smaller banks but perhaps not to the level of big institutions. JP Morgan’s trading division alone looks to be on pace for a 20-30% year over year increase. Investment banking revenue also rose more than 12%, something that also favors larger banks.

While banks have traded lower this year due to the pandemic, JP Morgan’s earnings could mean an across the board boost.