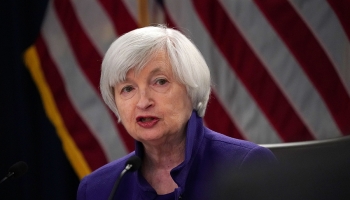 Former Federal Reserve chair Yellen was nominated as Treasury Secretary for the Biden administration. She was appointed to the Fed as vice-chair in 2010 by President Barack Obama and became chair in 2014, the first woman to hold the position.

If approved by the Senate, Yellen will be the first woman to run the Treasury Department in its 231 years of existence. She would also be the first person to have served as Treasury Secretary, Federal Reserve chair and chair of the Council of Economic Advisers.

Rob Nichols, CEO of the American Bankers Association (ABA), welcomed Yellen’s nomination and said her “years of experience in economics prepare her well for the challenges facing the country”.

“Dr Yellen understands the critical role banks play in the economy, and if confirmed, we look forward to working with her and the rest of the President-elect's economic team to bolster the recovery and expand opportunities and prosperity for all Americans,” he added.

Other economic nominations included Wally Adeyemo as deputy secretary of the Treasury. Adeyemo is currently chair of the Obama Foundation and was deputy director of the National Economic Council under President Obama.

He was also President Obama’s senor economic adviser and was the first chief of staff for the Consumer Financial Protection Bureau.

If confirmed, Adeyemo would be the first African-American person to hold the position of deputy secretary of the Treasury.

Cecilia Rouse was nominated as chair of the Council of Economic Advisers. She was a member of the council during the Obama administration and would be the first African-American woman to to lead the council if she is approved.

Heather Boushey, CEO of the Washington Center for Equitable Growth, and Jared Bernstein, former chief economist for Joe Biden when he was vice president, have also been nominated to the Council of Economic Advisers.

Elsewhere, the Senate approved Christopher Waller to serve on the Federal Reserve’s board of governors. He was approved by a tight margin of 48 to 47.

Waller is currently director of research at the Federal Reserve Bank of St Louis. He will serve a 10-year term on the Fed’s board.

The ABA’s Nichols said: “At this challenging moment for the country and the economy, his years of experience… and his background in macroeconomics will serve him well on the board. We look forward to working with him and the rest if the board to ensure the banking sector can continue to play its critical role in the recovery.”