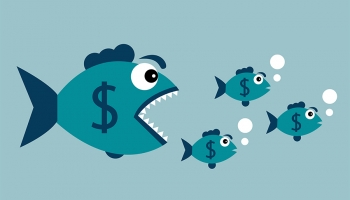 Regional lenders Huntington Bancshares and TCF Financial Corporation have agreed to merge in an all-stock deal to create a company worth $22 billion.

The merger is expected to close in the second quarter of 2021, subject to regulatory and shareholder approval.

The deal will create one of the largest US regional banks with dual headquarters in Detroit, Michigan and Columbus, Ohio, according to a joint statement released late yesterday. The combined company would have approximately $168 billion in assets, $117 billion in loans, and $134 billion in deposits, the statement said.

TCF will merge into Huntington and the combined holding company and bank will operate under the Huntington name once the transaction is completed. The terms of the deal were not revealed.

Huntington said the merger would allow the combined organization to capitalize on market opportunities and broaden the channels and customers it serves through expanded distribution and product offerings.

Stephen Steinour, chairman, president and CEO of Huntington, said the deal “combines the best of both companies and provides the scale and resources to drive increased long-term shareholder value”. Steinour’s roles will be unchanged following the merger.

TCF has approximately 475 branches primarily located in Michigan, Illinois, and Minnesota, with additional locations in Colorado, Ohio, South Dakota, and Wisconsin. It also conducts business across all 50 states and Canada through specialty lending and leasing businesses. Huntington has a network of 839 branches and 1,330 ATMs across seven Midwestern states.

The deal – which is subject to shareholder and regulatory approvals – is valued at $62.6 million based on Linkbancorp’s share price on December 7, 2020. GNB shareholders stand to receive $87.68 per share or 7.3 Linkbancorp shares for every GNB share they own, according to a press release announcing the transaction.

The combined entity will be one of the biggest community banks in the state with more than $800 million in assets. The transaction is scheduled to complete in mid-2021.

Linkbancorp CEO and founder Andrew Samuel, who will serve as CEO of the combined company, said: “It’s a very attractive financial transaction that accelerates our growth plan and evidences our commitment to an entrepreneurial, values-driven community banking model that positively impacts all of our constituencies.”

The deal is expected to close in the first quarter of 2021 and will see Happy State Bank take on First National Bank of Tahoka’s $12 million loan book and $50 million in deposits. Following completion of the transaction it will have assets of approximately $5.6 billion, with 61 branches across Texas.