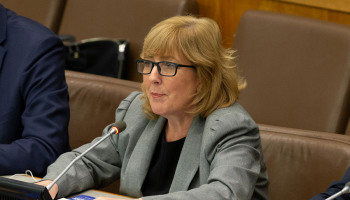 Fiona Reynolds, CEO of the UN Principles for Responsible Investment (PRI), is to step down from her role at the end of the year.

Reynolds has led the international organization since 2013, and has overseen its growth from just over 800 signatories to more than 4,000 as of June 6, 2021.

In a statement, Reynolds said: “Spending nearly a decade in London, so far away from my home in Australia, has been deeply challenging on a personal level.

“The Covid-19 pandemic has made this more difficult in many ways, particularly with the ongoing closure of borders, and so has hastened my decision. The trade-offs of not being able to spend time with my family, or even being able to reach them if I needed, have simply become too high for me.”

The PRI’s board has already begun work on identifying Reynold’s successor.

Chair Martin Skancke said: “In Fiona’s tenure as CEO of the PRI, she has led the growth in scope and reach of the organisation to investors, policymakers, and other stakeholders around the world. In turn, with tremendous commitment, energy and experience, Fiona has also contributed personally to the growth of responsible investing more broadly.”

Notable PRI developments under Reynold’s time as CEO include the launch of the Net-Zero Asset Managers Initiative, a collaboration of investment groups that have pledged to reach net-zero carbon emissions that has gained 87 signatories with more than $37 trillion in assets under management since launching in December 2020.

In 2017, the PRI overhauled its process for monitoring signatories and ensuring ongoing compliance with principles. This resulted in four organizations being removed from the PRI signatory list in 2020.

According to the PRI’s data, 800 US and Canadian asset managers were among 1,000 North American entities that had signed up to the principles as of June 6, 2021.

Meanwhile, the PRI also announced its latest three-year strategy. The organization said it aimed to build a bridge between financial risk, opportunities and real-word outcomes, with a focus on ESG incorporation.