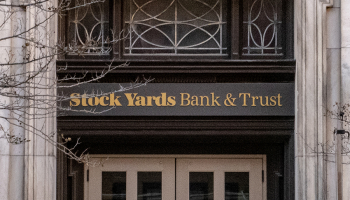 James Hillebrand, Stock Yards’ chief executive, said the merger would build upon the company’s market share in the Louisville market, while also expanding its presence in Shelby County and Northern Kentucky.

He added: “Additionally, and just as important, this combination significantly bolsters our wealth management capabilities, adding $2.6 billion in wealth and trust assets, and making Stock Yards the largest bank-owned Trust company in the state.”

Upon completion of the merger, expected at the end of 2021, the combined franchise would have total assets of $7.4 billion, a loan book of $4.9 billion and deposits of $6.4 billion.

The purchase is designed to provide Old Second with the scale to compete and prioritize investments in technology and growth.

James Eccher, president and chief executive of Old Second, said: “This combination is expected to significantly enhance our financial strength, our position in Chicago and our ability to invest in building the best bank for our customers and communities.”

Elsewhere in Chicago, Finward, the parent of Peoples Bank, has confirmed it is set to acquire Royal Financial.

Benjamin Bochnowski, Finward’s chief executive, said the acquisition would “give Peoples Bank a meaningful presence in the city of Chicago and enhance our suburban presence”.

Provide will maintain its brand identity and continue to operate as an independent business, according to the announcement.