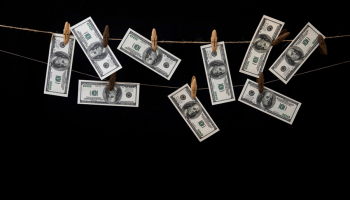 Fines for anti-money laundering (AML) at financial institutions worldwide soared to $2.2bn (£1.6bn) last year - five times higher than in 2019 — as regulators cranked up their crack down measures.

And Kroll, the governance and risk consultancy, has reported in the first six months of 2021 a total of $1bn of AML fines have been handed out in 17 big actions, already eclipsing the $444m figure in 2019.

Claire Simm, head of financial services compliance and regulation at Kroll, said: “Investigations were not paused for Covid-19 and the value of fines has surged as regulators impose tougher penalties.

“They are continuing to send the message that despite any obstacles, enforcement remains a top priority.”

The majority of the fines relate to failures in AML management, inadequate suspicious activity monitoring and customer due diligence, as has been the trend since Kroll’s study began in 2016. Global regulators are resorting to harsher punishments and even criminal proceedings for those it deems to have fallen short, despite years of warnings.

The US has historically led the way in issuing fines, but more than half of the fines in 2021 were in the Netherlands alone. Banks and financial services institutions in the UK and EU have also been particularly hard hit as watchdogs heap pressure on the financial industry to stiffen its defences against crime.

The UK’s Financial Conduct Authority (FCA) launched its first attempted prosecution in March for AML failings against NatWest, which failed to properly monitor the actions of a Bradford-based gold dealer. UK start-up digital lender Monzo has also been investigated by the FCA over potential breaches of AML laws.

Siimm said the NatWest case was “a clear warning from the regulator that compliance failures will not be tolerated, on top of the already significant deterrents of mega-fines and reputational damage”.

Kroll’s report concludes that because of greater enforcement we can “expect to see large fines and criminal enforcement continue through 2021 and beyond”.