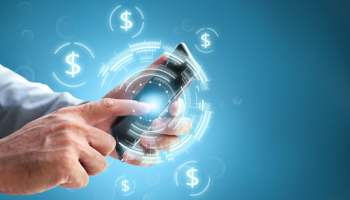 US consumers prefer banking through mobile apps to any other method, according to new research from the American Bankers Association (ABA).

A consumer poll conducted by Morning Consult on behalf of the association found that 45% of respondents said they most often used mobile apps on smartphones or tablets to manage their bank accounts.

This was followed by 27% who said they most often used online banking through their laptop or PC.

“As mobile banking capabilities have evolved exponentially over the past decade thanks to bank investments in technology, we’ve seen many consumers become more comfortable embracing their phones and tablets to make everyday transactions,” said Brooke Ybarra, ABA’s senior vice president of innovation strategy.

Branch banking was preferred by 14%, up from 10% at the height of the Covid-19 pandemic. Ybarra said many people “haven’t looked back” since making the switch to online or mobile banking during the pandemic but maintained that “in-person branch visits continue to play an important albeit less frequent role for many bank customers, particularly when it comes to more complex transactions”.

Among the four age groups covered by the survey, three showed a clear preference for mobile banking. More than half of Generation Z (those born between 1997 and 2012) and Millennials (1981 to 1996) respondents, and 50% of Generation X (1965 to 1980) respondents, preferred this route.

The most popular banking method among Baby Boomers (1946-1964) was online banking at 38%, with 32% preferring mobile banking. One in five (20%) preferred to bank in-person at a branch.

ABA said its findings echoed those of a recent study by the Federal Deposit Insurance Corporation, which found that mobile banking had increased significantly in popularity over the five years to the end of 2021 to become “the most prevalent primary method of account access”.