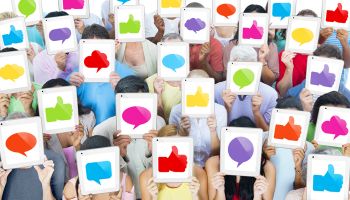 On the one hand it’s as hard to judge the return on investment of your social media plan as it is to judge the ROI of establishing a new branch or contact center. Like a branch, having a Facebook or Twitter presence is just another channel to offer customers.

“Social media is another touch point in order to get in front of your customer base and community members,” said Amber Farley, executive vice president, FMS Social. “It’s another space that you can be in and have a presence, and enhance your brand. A lot of times it’s hard to measure what that does.”

On the other hand, it’s possible to collect overwhelming (and ultimately meaningless) amounts of data from social media campaigns—likes, shares, comments, etc.—such that even if you have all those numbers, what they really mean remains elusive.

“Social media a lot of times is a vehicle, not a destination.… Social media is meant to just drive people to the [bank’s] website or to some other place to do the actions that you want them to do,” said Farley. She spoke during a recent ABA Briefing/Webcast, “Value and ROI in Social Media—Attracting Fans and Retaining Existing Fans.”

Farley provided two specific pieces of advice in this regard. First is a general list of meaningful, measureable things. The quantitative metrics include: website visits, conversions (generally, when a customer takes a desired action at a particular site), time spent at destination, number of fans and followers, number of likes, and number of shares. The qualitative metrics include positive and negative comments, and the sheer volume of how much people happen to be talking about the bank.

More important, though, is the need to “limit your parameters,” she said. By this she means that, as the bank mounts campaigns, such as contests, community actions, or other efforts that last for defined periods of time—set metric goals specific to each campaign and then measure those to get a sense of effectiveness.

As an example, say the bank offers to donate meals to a community charity based on the number of times people send tweets or access the bank’s Facebook page, and the campaign is to last two months. Have a goal of X number of meals by the end of that period, for example, extrapolated from the number of social media contacts.

“Have a very specific goal and process in mind for each campaign that you’re doing, so then it’s easier for you to define what those metrics are going to be,” said Farley.

At the same time it’s going to help your social media effort be more measurable, and make it easier to report on how successful that effort was. “Over time you’re going to see how that influences your overall social initiative and presence is,” said Farley.

For information about the ABA Briefing/Webcast series “Successful Strategies for Social Media,” go to http://www.bankingexchange.com/old//Training/teleweb/Pages/tb2013-14SocialMediaSeries.aspx.