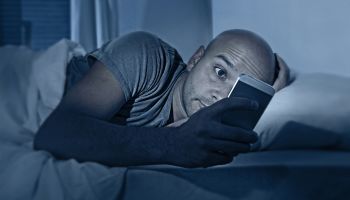 Almost half of Americans surveyed who use smartphone banking apps have conducted transactions while in their bedrooms, according to a survey of over 2,000 adults. The mobile banking and shopping behavior reported by respondents may surprise you.

Americans are banking and shopping in odd places these days.

Nearly half of smartphone banking app users (46%) are using their devices for transactions from their bedrooms, according to an online survey conducted by Harris Poll on behalf of Feedzai, a big-data science company.  Over 2,000 U.S. adults age 18 and older participated.

Additional findings show nearly one-third (30%) bank while in the bathroom and 13% while driving. Among online smartphone shoppers, 4% of them are shopping on their mobile phones while crossing the street or standing in line (18%).

Meanwhile, 70% agree that doing transactions at a physical bank is safer than online or mobile, but over half (55%) prefer doing their banking online or via mobile.

The survey also reveals that Americans are equally as cautious about data breaches this year as last year. So it may not be a surprise that consumers are willing to give a financial institution access to their personal data if promised protection.

"People use their smartphones as a tool to shop and bank, even in the most liberal places, and leave behind an ever-growing trail of digital data. Yet, consumers are still concerned about safety," says Nuno Sebastiao, CEO of Feedzai.

Closer look at the usage findings

The survey found these trends in how consumers use mobile financial and shopping services:

• Banking from nearly anywhere. While making a banking transaction on their smartphone, 30% have done so in the bathroom, 13% while driving, and, as mentioned, 46% are mobile banking from their bedrooms. (This latter measure increases to 60% for millennials between 18-34 years old). One-fifth (20%) of millennials have made a mobile banking transaction at a bar or while driving.

• Mobile shopping compels, too. 26% of online mobile shoppers have shopped while in the bathroom. And 8% of 18-34 year olds have shopped on their mobile phones while crossing the street.

• … branch usage flags. 57%, however, go to their bank's branch significantly less than they did two years ago.

Closer look at the security findings

The survey found these measures of consumers’ attitudes towards security:

• Now a fact of financial life? Over half of consumers indicated data breaches are to be expected as part of the experience of shopping with credit/debit cards (56%). Last year, 51% of consumers said the same.

• Safest going green. Over half of Americans believe cash is the safest way to purchase something (55%), while only one in five (22%) believe paying with credit cards is safest. However, only 36% of consumers said they are using cash for more of their purchases in light of data breaches.

• Face to face over faceless. More than half of Americans (56%) still think it's safer to use credit cards in physical stores than online when shopping. In the Midwest the number spikes to 64%.