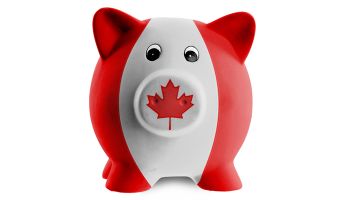 Dan Dickinson doesn’t use business cards. As head of a budding digital bank, he feels using them would be counterintuitive. He does tweet—you can follow him on Twitter @digitalbankguy—but neither point distinguishes him from other digital players. Getting business cards from this crowd can be hit or miss and social media is their middle name.

But one thing does set Dickinson apart as he strives to introduce a new digital bank within a bank for Canada’s Equitable Bank: Unlike other digital pioneers, he’s starting from a base that is already a branchless bank.

Equitable, unlike the handful of very large commercial banks that it competes with, hasn’t opened branches since its founding in 1970 as The Equitable Trust Company.

The company’s business is dominated by commercial and residential real estate credit and it uses both securitization and deposits, but as the organization went national, it avoided building up a huge network of offices. Deposit gathering, for example, takes place chiefly through third-party deposit agents, investment dealers, and financial planners, including those employed by Canada’s large banks. Deposit options offered include high-interest savings and guaranteed savings certificates, the equivalent of CDs.

Dickinson, a 15-year veteran of Canadian banking, thinks digital is the future, something his own father, he allows, doesn’t quite agree with. Dickinson’s entire career over several jobs has been devoted to bank technology and self-service channels.

Dad’s proud of him, Dickinson says, but “he keeps thinking someday I’ll really make it and become a branch manager.”

Digital Dickinson smiles at that.

Dickinson spoke about the upcoming launch of Equitable’s digital bank—EQ Bank—during a press and analyst panel discussion sponsored by Temenos to mark the unveiling of the core systems provider's whitepaper The Rise of the Digital Bank.

EQ Bank’s development began a year and a half ago, and the bank has live accounts in place during its “shakeout cruise.” The initial savings account is one designed to help consumers build up savings more quickly. The new institution is built around the Temenos Connect system.

Dickinson said the impetus for building the new venture was the realization that for many customers a trip to the bank is so odious that “they would rather go to a dentist than go to a bank branch.”

He explains that bankers who resist digital banking and who insist on the continuing need for branches fail to understand how consumers really feel.

“What customers want is help,” says Dickinson in response to claims that customers want to go to branches to open accounts and discuss major decisions. “They don’t necessarily want a branch. As a consumer, I can look someone in the eye on a tablet.”

EQ Bank consists of about 25 staffers and Dickinson. He says he often recruited specifically away from the usual sources for bankers, wanting people with diverse talents who could give EQ a fresh start. Some came from nontraditional, nonfinancial marketing, some from social media, and other new sources.

“The first guy I hired was somebody I’d worked with at BMO [Bank of Montreal] and he’s in his early 60s, but he’s a digital native,” says Dickinson. “Age doesn’t matter. He’s the guy who waits in line at the Apple Store. We have a good mix of people by age and experience.”

Dickinson purposely has kept the team lean, but not only from the viewpoint of costs. Take design. Part of what makes new digital ventures take off are attractive graphics and innovative functionality. Dickinson says he would rather engage designers from outside the bank so he can always switch to people with fresh ideas. Maintaining a staff of designers, by contrast, would saddle the new venture with employees who in time will go stale. He’ll also keep the in-house IT team lean.

He’ll be looking to the outside for key partners. “I’ll probably have 25 to 30 vendor relationships,” says Dickinson.

Lean is part of the parent institution’s business plan—Equitable Bank’s investor relations materials often promote the cost savings of being branchless, for example. Dickinson expects the EQ Bank model to provide even better savings, which he says will be reflected in return to savings customers, lower rates to borrowers, and, potentially, different approaches to staffing practices.

“The retail banking model will change,” says Dickinson overall. “The fintech explosion should worry banks and if it doesn’t spur them to action then I’d worry about those financial institutions’ long-term future.”

On the other hand, Dickinson also adds that when he observes nonbank fintech players in action, “I don’t envy those companies bumping into regulators for the first time.”

Asked about other players, Dickinson says he’s very impressed by Simple, now part of BBVA. “I draw my inspiration from them,” says the digital banker.