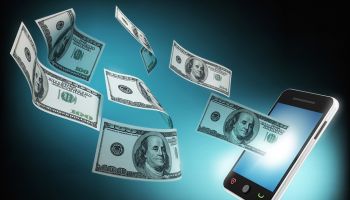 Though mobile-payments awareness has reached a tipping point—with more than half of consumers in North America aware that they can make payments through their mobile phones—fewer than one in five surveyed (18%) use their mobile phones to make at least one payment a week, according to a new report from Accenture.

The report found that while the number of North American consumers who know they can use their phones as a payment device jumped nearly 10 percentage points since last year, to 52%, actual mobile-payment usage remained flat, growing only 1%. The document is based on a survey of 4,000 smartphone users in the U.S. and Canada.

”Though it’s clear that consumers are aware that they can make payments through their phones, continued use of existing payment methods—such as credit cards and cash—and slow retail adoption of modern card readers have caused usage levels to remain stagnant over the last year,” says Robert Flynn, managing director for Accenture Payment Services in North America. “This is a clear indicator to banks and retailers that although the digital transformation in payments is progressing, there is still a long way to go before we reach broad market adoption.”

Who uses, how to grow more users

Consumers with household income of at least $150,000 are the most-avid adopters, with 38% using their phones to make payments at merchant locations at least weekly. Twenty-three percent of millennials—people between the ages of 18 and 34—reported using their phones to make mobile payments at a merchant location at least weekly compared to an average of 18% for other age groups.

The survey also identified ways to increase mobile-payment adoption rates—namely, by giving consumers better security, incentives, and rewards. More than three-quarters of consumers who currently make mobile payments said they would increase their usage if offered discount pricing or coupons based on past buying behavior (cited by 79% of users) and if they received reward points (cited by 78%). Additionally, more than half of those not currently making mobile payments would make them if offered discount pricing or coupons (cited by 54% of non-users) or reward points (53%). 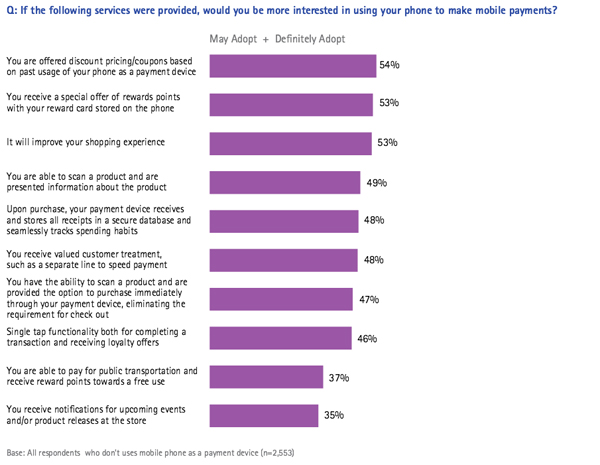 When looking at which mobile payment ecosystems are gaining the most momentum, the study found that Apple Pay—just one year after launching—is used for more than two-thirds (68%) of all mobile payments in U.S. stores.

“Connected commerce” is the new “wearables”

In terms of emerging trends, the survey found continued consumer interest in connected commerce (wearable or connected payment devices) and peer-to-peer (P2P) payments. Even though the payments industry has not yet scratched the surface on the “art of the possible” in connected commerce, one in five consumers (20%) said they have used a wearable device to make a payment at least once, and the same number of respondents reported being interested in making a payment through a connected smart device such as a smart appliance or a smart car.

The survey also pointed to a high level of adoption for P2P payments, as well as room for continued growth. More than two out of every five consumers surveyed (42%) reported they have used P2P payment apps, and 15% said they make P2P payments weekly.

“We’re at the edge of a new frontier for connected commerce and just beginning to see some of the possibilities it offers,” says David Edmondson, senior managing director of Accenture’s Banking industry practice for North America. “With almost half of North Americans still using traditional checks to make payments to other consumers, P2P payments remains poised for potentially strong growth. Overall, integrating payments with the power that Internet of Things technologies can offer promises to usher in a new era of consumer product innovation and retail merchandising.”