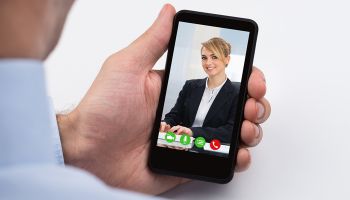 Imagine the quandary a branch manager would have if a prospective customer came through the door unannounced and declared that he wanted to talk to someone about obtaining a mortgage—right now, as in, this instant.

It wouldn’t matter that the branch’s resident mortgage officer happened to be busy with another customer, or that that branch actually shares a mortgage officer with six other branches and he wouldn’t be on the premises for another three days. The prospective customer demands to either talk to someone at that branch, now, or turns around to go to some other bank across the street. It’s not a far-fetched scenario in today’s world of higher expectations.

If you are a manager of a Nationwide Building Society branch in the United Kingdom, your answer to that customer is: “We can do that.”

How? Through an as-yet uncommon system provided by Cisco called the “remote advisor platform” (dubbed “NationwideNow” by the U.K. bank). To call it a videoconferencing set-up does not do it justice. It replicates an in-person, real-time, face-to-face meeting between customer and representative, but does it in a seamless, comfortable, confidential way.

In the room, but not

The customer goes into a specially prepared room and sits in front of a high-definition conferencing screen. In easy reach are a desk, printer, scanner, and auxiliary screen that can transmit associated information. Branch staff have already made sure everything works and the sound is checked. The customer is introduced to the bank’s agent, who, on his side of the camera, sits in a room identical to the one the customer sits in. The agent can then engage in conversation, explain the various details of whatever product the customer is interested in, guide the customer into scanning or printing whatever documents are needed by either side, and even ask the customer if he would like tea or coffee (to be provided by the branch staff).

“Customers can get access to our people to talk to them about our products six days a week,” said Goldman in an interview with Banking Exchange. “They don’t have to wait for a visit from the seller. They can have access whenever it suits them. This encourages the staff to have more conversations to say to customers with confidence, ʻWe actually can help you at a time that suits you,’”

Some background: A “building society” in the U.K. is comparable to a savings and loan in the United States, in that it is mutually owned and specializes mainly in house purchases, mortgages, and retail checking, savings, credit cards, etc. Nationwide is the largest building society in the U.K., with a history that goes back 160-plus years. Through a series of mergers, it now has 700 branches. It is headquartered in Swindon, some 70 miles west of London.

As Goldman tells it, in late 2013 the bank decided it had to do something to combat the inherent inefficiency of having part-time agents doing circuits around the countryside, servicing multiple branches that could not individually justify full-time personnel.

Working with Cisco, “We ran a number of pilots in small branches in south Wales and northern England where we stopped the part-time sellers going to those locations and gave them NationwideNow facilities,” Goldman said.

“Over the next two years we want to be in all of our locations,” he said. Not only that, but plans are underway to put multiple conferencing rooms in the busier branches in order to beef up capacity. The reasoning: Even branches with resident agents sometimes get overbooked. By giving customers the option to access a remote expert, the branch is less likely to lose that business.

So how has it worked out so far? “On exit we ask customers to access a screen and give us some feedback. We’re at 99% satisfaction. We are bowled over by it, frankly,” Goldman said.

Not only that, but comparing pre- and post-implementation so far, he says that on average bank officers are seeing at least 30% more customers.

In the United States, such systems are rare, says Bob Meara, Celent analyst. “Where we see it most commonly—although to call it common overstates it—is for…mortgage lenders, financial advisors, etc., and for specialized customer service needs,” Meara tells Banking Exchange.

The key thing in its success so far, Goldman notes, is the attention to customer experience.

“What would have been a mistake is if we had just seen this as a technology issue, and not the whole experience,” he said. “We put as much effort into understanding the environment for the customer, the room, the dimensions, how easy it is to use, how easy it is to access the printer and scanner…It’s about the whole look and feel,” he says.

Typically customers will be hesitant when they first sit down in the rooms, Goldman says. Then, though, “we figure within two and a half to three minutes they are totally relaxed and at ease with the whole process and almost forget that it’s a virtual environment.”

Meara, the Celent analyst, is somewhat skeptical about how bank customers in the United States might react to such a system. “Granted, appointments may be somewhat more easily accomplished if specialists are made available via video…but going to a branch to speak to someone using video seems like a concession to me,” he tells Banking Exchange.

Goldman sees a direct connection between branch acceptance and digital use, and addresses this issue this way: “We believe in our branch network absolutely. We also know that that branch presence has a direct relationship to our digital market share. The further away you get from one of our branches, the less our digital market penetration.”

Meara, by contrast, foresees a stronger movement in this country to offer video engagement directly to consumer’s devices. “Why go to a branch? And, we don’t see this replacing in-person, nonvirtual engagement. It will supplement.”

Again, Nationwide Building Society is exploring this exact potential, that of offering real-time access to experts via a customer’s own smartphone, tablet, or computer.

“We’re going to test that to see what our customers think,” said Goldman.