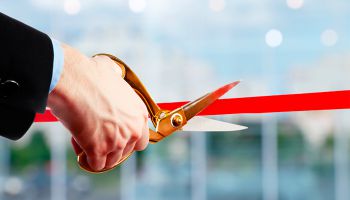 Reports of a change of name for the bank-run P2P rival to Venmo and other such services have not been confirmed by clearXchange.

What’s in a name? Brand recognition, for the most part, and that’s presumably why the peer-to-peer payment system clearXchange reportedly is changing its name to “Zelle.”

As originally reported in The Wall Street Journal, clearXchange, run by Early Warning, which is itself a bank-owned entity, will switch its name to Zelle. The formal announcement reportedly will be made in October at a payments industry conference. (Possibly the Money 20/20 conference in Las Vegas, Oct. 23-26, at which Lou Anne Alexander, Early Warning’s chief market development officer, is due to make a presentation.)

According to various online dictionaries, “zelle” can mean “the best girl ever,” meaning a woman who is both attractive and smart. It can also mean a biology term referring to the basic structural and functional unit of all organisms—otherwise, presumably, called the cell. Yet another meaning could conflate “zelle” with other meanings of “cell,” such as the room in which a prisoner or a monastic resides. There are also the sweet round Italian confections known as Pizzelles. It’s unclear whether any of these meanings were deliberately considered when choosing the name.

The Wall Street Journal reporter who first broke the story of the name change cites one unnamed person “familiar with the selection” who indicated that “Zelle” is supposed to conjure up an image of the speedy gazelle, a type of antelope.

clearXchange’s place in the market

Widely hailed as a prime competitor for Venmo, clearXchange is run through mobile banking apps from Bank of America, Capital One, Chase, First Bank, US Bank, and Wells Fargo. Customers log in with their mobile devices, then send money in real time from one bank account to another.

The upcoming name change extends an aggressive strategy by Early Warning to expand its reach. Earlier in August the company announced separate arrangements with Visa and MasterCard to enable U.S. debit card users to send money to, and receive money from, customers of participant banks in real time.

Specifically, the arrangements leverage MasterCard’s Send system, which reportedly can reach 97% of all U.S. debit card accounts, and Visa’s Direct system, which is available in more than 200 markets around the world.

Still, though, clearXchange has never been marketed as a corporate brand. For example, Chase’s P2P offering is called Chase QuickPay.

In any case, clearXchange has not had the name recognition that PayPal’s Venmo has enjoyed. As The Wall Street Journal’s reporter Robin Sidel points out, “Venmo’s users frequently refer to the name as a verb, as in ʻJust venmo me for last night’s dinner’.”

PYMNTS.com, commenting on the name change, puts it this way: “The hope? That soon the young and hip who are Venmoing each other will be Zelling each other like crazy come the fall.”

Still, no word yet as to how the Early Warning banks will incorporate the new brand name into their offerings. 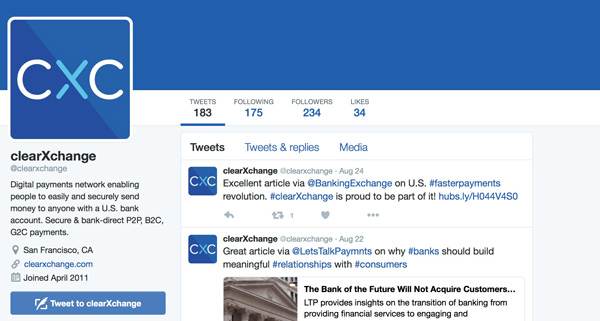 The clearXchange Twitter page has had nothing to say regarding reports of a name change to “Zelle.”

Zelle in the competitive arena

A lot is at stake as P2P payments are expanding rapidly. Venmo, in its online blog, for example, pointed out that for the first time in its history, in January 2016, more than $1 billion in payments were made through its system.

“That’s over two and a half times what we saw in January 2015, and more than ten times our volume in January 2014,” the blog states.

According to other estimates by Business Insider Intelligence, total mobile peer-to-peer payments could reach between $15 billion to $28 billion this year.

Zelle would take its place among a number of competing P2P systems. In addition to Venmo and PayPal, it will vie with Circle, Dwolla, Google Wallet, Messenger, PopMoney, Snapcash, and Squarecash, among others.

Early Warning would not comment to the Journal on the derivation of the name Zelle, other than saying that a name change has been in discussion for a number of months.