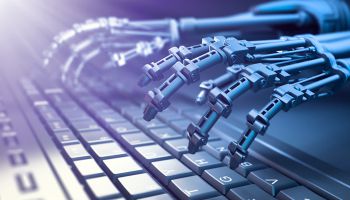 Would you trust your finances to a bot yet?

Ever had the urge, when “chatting” online with a customer service representative, to ask, “Are you a real person or a bot?”

That applies to those conversations that go so well, and seem to be so personalized, that you can’t believe you are talking to a “robot.”

Thing of it is, not all conversations with bots go quite so well. And that’s why Forrester Research analyst Peter Wannemacher wrote a report, Bots Aren’t Ready To Be Bankers.

“While someone may not fret much when ordering a taco is clunky or doesn’t work, the stakes are too high when it comes to actions and advice related to people’s money,” writes Wannemacher. One national pizza chain does offer bot-based ordering. He says it’s not quite perfect.

Wannemacher believes that bank digital teams should be looking to the next generation bots for their foray into bot-driven banking conversations. In the meantime, he writes, they should concentrate on data infrastructure issues that must be solved in time for the bots of two to three years from now. He believes by that time the artificial intelligence chops of the bots will be closer to what banks can afford to expose their customers to.

Anyone who has been a fan of any generation of Star Trek, where characters conversed at will with the starship’s computers and could demand complex tasks instantly, would love to live that.

But even such apps as Siri aren’t quite up to opening a bank account just yet—can a bot claim to “Know Your Customer,” we wonder. Wannemacher notes that bot-like technology goes back to the 1960s, believe it or not, but the depth of artificial intelligence isn’t really up to the banking grade yet.

Some banks have explored some uses of Alexa, Amazon’s service, but Wannemacher reports that one insider told him such efforts at that bank are mostly experimental in depth. He adds that chat bots on messenging platforms so far would be a disappointment to bankers. [Read “Alexa, pay my mortgage”]

“If a person using a chat bot has a problematic or potentially incomplete bot interaction regarding their money,” warns Wannemacher, “they can be left annoyed, upset, or even scared.”

Wannemacher’s report features samples of bot conversations that should give bankers pause. And he concludes with recommendations for what they should do while they are paused.

By the way, this article was written by a 59-year-old human with glasses and hearing aids, definitely not a technologically superior bot.