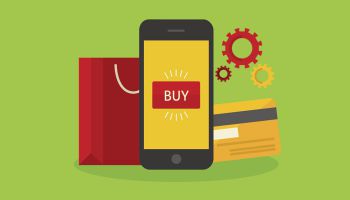 Increasingly the smart device defines the consumer retail experience, from shopping remotely to shopping in stores—and, by the way, paying for it all.

Omnichannel payments and mobile are increasingly messing with the time-space continuum of retail purchases.

The lines between how people shop, order, and pay for consumer goods, and their willingness to opt into geolocation through their mobile devices, are changing the boundaries of where, when, and how retail transactions take place, according to Michael Moeser, director of payments at Javelin. This comes as Americans’ ownership of mobile devices has reached the saturation point, according to Javelin.

Moeser, principle author of the firm’s 2016 Retail Point Of Sale Payment Forecast, says the intersection of online shopping; the ability to order remotely for pickup in stores and restaurants; and retailers’ urge to flip “showrooming” on its head to turn physical visits into the completion of purchases and the potential for more sales is remaking retail.

Javelin research finds that online retail transactions, via both computers and mobile devices, rose 12% in 2015 over 2014.

“Mobile devices continue to comprise an increasing share of ecommerce sales, and the integration of channel options—allowing shoppers to select and pay in one channel and pick up or return merchandise in another—has enhanced the value of digital options as a medium for commerce,” according to the report. Javelin sees the rising use of mobile apps that speed in-store checkouts, and apps’ increasing integration with mobile wallets as hastening the erosion of the walls between in-store and remote payments.

As a payments analyst, Moeser says, he downloads every app, to try them out and keep up with the state of the art. But he believes consumers will not do that. They will focus on a handful of apps that will become their “go-to’s.” 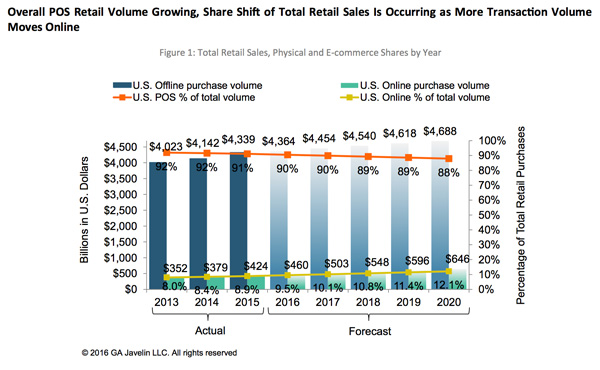 And he says that this indicates the need for banks to ally themselves with merchants that will enable them to capture a bigger piece of the payments stream. Retailers with networks of stores increasingly see their physical locations as part of how they can compete with retailers that only serve customers through e-commerce, Moeser says.

Changing ways of buying everything

Do you scout out the inventory of, say, plumbing parts before you visit the home center? Have you purchased shoes or other consumer goods online for pickup in your favorite store? Have you bought a meal online for pickup, paying before you pick up? Then you are already knee deep in this retail payments evolution.

Moeser says the marriage of online ordering and payments plays to consumers’ increasing desire to save time and obtain convenience.

Take “BOPUIS”—buy online, pick up in store—service. For merchants, this increases shelf space, virtually, adding inventory that doesn’t have to sit in individual stores waiting to be bought. For restaurants, being able to serve up meals that don’t require additional tables expands their footprint without adding a dining room or squeezing in more seating. Mobile payments make this easier on the consumer and faster. Paying in advance and merely being able to grab and go appeal to the consumers’ desire for speed and ease.

“It’s becoming the way that we buy things,” says Moeser. “Consumers are becoming accustomed to ordering things from a store and not having to actually shop.” He notes that his usual grocery shares its strip mall with a convenience store, testimony to folks’ desire to buy quickly, and mobile ordering and payments are the latest wrinkle in this trend. Breezing in with a bar code on their phone or printed out as proof of payment plays to consumers’ wish to move, and increasingly retailers have set up online pickup desks that separate the flow of online purchasers from in-store buyers.

Retailer would love to have the consumers arrive and browse through the store, but increasingly people don’t want to do that, he explains.

“Stores realize that consumers are busy,” Moeser explains. “How do you cater to the customer who hates shopping?” Online ordering and payment, he says. As a result, the number of apps serving this need are booming—he says there are hundreds of them already.

There’s more here than catering to those in the fast lane.

Proprietary apps can help a retailer bind a consumer to their brand. People will pick those that tie in with their buying preferences. And even for those who shop “live” there are more and more opportunities to make it more attractive to center on a handful of retailers.

Moeser says that in 2010 only 17% of shoppers were willing to allow stores to access geolocation services. This has risen to 42% through 2015, he continues.

Moeser says that part of the reason for this is that increasingly there’s an incentive to let retailers know that you are in their store. Retailers tapping geolocation can spot the shopper in-store and offer targeted coupons on the spot or send a message for a “flash sale” to the consumer’s mobile device. Moeser considers this the high-tech, tailored equivalent of the old-fashioned “blue light special,” once a staple of Kmart. Instead of a rolling cart with a literal flashing blue-light moved to the in-store unannounced special’s location, the special notification goes straight to the consumer’s smart phone.

“Retailers are using their apps to draw consumer interest,” says Moeser. One example is Target’s Cartwheel app. The app has its own website encouraging shoppers to download the app. Specials that shoppers select create a barcode that can be scanned at the register for extra savings and further savings can be earned.

A multitude of ways to pay through specialized store, restaurant, and other retail apps, married to mobile wallets, are making the retail payment decision one that consumers must devote more thought to. Both cash and check purchases are falling, and will continue to fall, according to Javelin.

By 2020, Javelin’s report predicts, the share at point of sale of cash will fall to 16%, and checks’ share will fall by then to 5.8%. In addition, Javelin sees the usage of gift cards falling. The reason is that the top use of P2P payments is gifting funds to others. Javelin predicts that the base of P2P users will rise by over 80% over 2015 levels by 2020, grabbing what otherwise would have been growth in gift-card purchases.

“M-commerce is going to experience explosive growth as retailers flock to the channel because that is where consumers increasingly want to shop,” the report says.

What this means for banks

Javelin warns that banks cannot possibly partner with every retailer’s mobile app or e-commerce website. To make their payment “card” account the default choice in consumers’ mobile payments wallet, they will have to make it worth their while.

This will take the form of incentives both for signing up and for then using the bank’s card, tailored to the market segment being wooed.

One example Moeser cites is a Wells Fargo card that offers shoppers a 20% bonus on cashback awards during the first 12 months of enrollment, for purchases made via mobile wallet. He also points to Chase, which earlier this year rewarded customers with a free Eric Clapton song download for loading one of its Visa cards onto Apple Pay.

The battle will be one of constantly encouraging shoppers to use the bank’s card—and those enticements will have to be on top of what the retailers offer. The report warns banks not to surrender P2P to nonbank providers such as Venmo or Facebook.