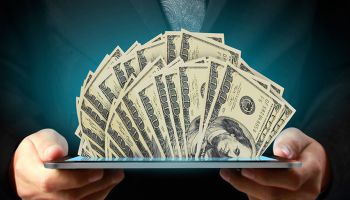 Technology has changed the ways in which consumers demand credit and lenders supply it. One of the more noteworthy shifts has been the emergence of fintech consumer lenders, generally characterized by no branches, an emphasis on agile and sophisticated use of technology, and reliance on both traditional and non-traditional underwriting data.

These lenders have focused on growing the unsecured personal loan market since 2013. They’ve done so with dramatic success: This market hit a milestone of $100 billion in outstanding balances in the third quarter of 2016. In the quarter preceding this milestone, 26% of the market share for originated balances came from fintechs, making them the second-largest provider of personal loans after banks.

How did they do it?

With their increasing market share, fintechs have drawn attention to what has historically been a rather low-key product line for many banks. Fintechs’ making a hot new industry out of these loans has led to some interesting hypotheses among industry pundits. Among them:

2. Fintech loans perform worse than those made by other lenders.

3. Fintechs will not be able to earn sustainable returns.

To investigate these concepts, and to better understand loan performance for all lenders who serve the consumer loan market in general, TransUnion conducted a study of 17.5 million consumers who originated a personal loan from Q1 2014 through Q2 2015.

Using the VantageScore 3.0 credit score, we compared the distribution of risk for the consumers originating personal loans in our study period. We found that 50% of loans originated by fintechs went to consumers with scores above 640—which is more of a near prime cutoff.

In contrast, we found that traditional finance companies do cater primarily to subprime consumers, as 50% of their borrowers had a credit score of less than 600.

Banks were the most conservative when it comes to risk, with 52% of loans originated to consumers with a score of 700 and above.

And credit unions were similar to fintechs, with 50% of their loans originated to members with a score above 650.

Conclusion 1: Fintechs have more risk appetite than banks and credit unions, but are more conservative than traditional finance companies.

Hypothesis 2: Fintech loans perform worse than those issued by other lenders

We measured credit performance by evaluating balances that were more than 60 days past due within 12 months of origination.

We found that fintech loans generally performed worse than their competitors across all risk bands.

For example, 5% of consumers with a 600 credit score who opened a personal loan with a fintech were delinquent in the first year. In contrast, the percentage observed was much lower for banks, credit unions, and traditional finance companies, coming in at 2.9%, 2.6%, and 3.8%, respectively.

Some of this difference can be explained by the absence of a customer-facing environment, the lack of other credit relationships with the consumer, and initial learnings of new entrants in this market.

The point is that loyalty and experience matter—a lesson fintechs are quickly learning. 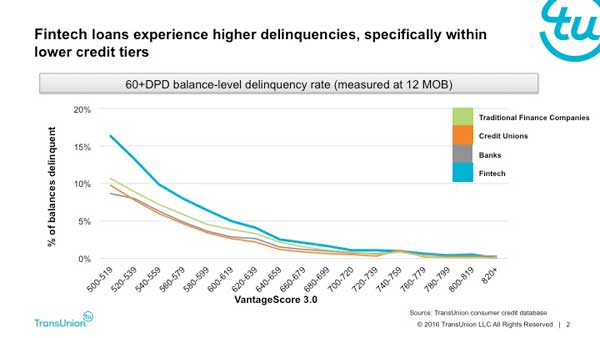 However, risk is not a complete measure unless compared against return—which leads us to our third point.

Hypothesis 3: Fintech lenders will not be able to earn sustainable returns

To evaluate this hypothesis, we created an approach to calculate a simple “risk-return ratio.”

In this example, the risk-return ratio can be measured as 5%, which is calculated simply by dividing partial earnings by originated balances. Of course, this ratio does not capture key components of a traditional P&L, such as cost of funds; fixed costs around branch network or technology; and operating expenses such as collections, loan processing, and marketing costs.

While this approach is clearly not a comprehensive measure of a lender’s portfolio return, it makes a good starting point for evaluating and comparing performance across portfolios using credit file data alone.

Interest rates are generally not reported to credit bureaus. So we estimated APRs using the reported originated loan and monthly payment at origination. This is technically more of an “effective APR” metric, as in some cases it is actually a combination of APR and fees.

By measuring monthly balances reported, we can then estimate the amount of interest income that was earned based on whether that loan was current or delinquent during those 12 months.

Using this approach, we found that fintech lenders earned an effective portfolio risk-return ratio of 6.6% in the first year on book for loans originated within our study period. Banks and credit unions earned returns only about 10 basis points higher than fintechs, and traditional finance companies earned almost double (13.5%) the risk-return ratio of other lenders.

Our analysis indicated the following as some of the drivers for these performance points:

While fintech lenders incurred the highest delinquencies in this study, they priced their loans close to traditional finance companies in the highest risk segments (i.e. 640 and below), and competed with banks on price within the lowest risk segments. In essence, with an even risk distribution and risk-based pricing strategy, fintechs earned risk-return ratios similar to banks and credit unions.

Our study further observed that recent fintech vintages are performing better. The Q1 2014 cohort of originations earned a 3.7% risk-return ratio, while the Q2 2015 vintage earned a 7.6% risk-return ratio in the first year on book.

This is primarily driven by what we observed earlier in this article concerning the shift in origination share toward prime and higher credit tier consumers. Also, one could assume that fintechs are fine-tuning their strategies for increasing returns as they test and learn.

There are many other hypotheses to examine around the future of fintech lenders and what it means for other types of financial institutions.

In today’s environment, all lenders, whether fintech or not, aspire to address consumer credit demand with agile technology and provide a seamless consumer experience. A sustainable return is the key consideration that enables them to continue to do so.

The consumer finance marketplace is not close to being done with this era of change and innovation. With the recent success stories in consumer participation and comparable risk-return ratios, fintechs have proven that using technology to enhance consumer experience is revolutionary and long overdue for the financial industry.

Traditional lenders must adapt to consumer needs and address gaps that exist in the consumer finance industry to capture demand and grow market share. Lenders need to be prepared to anticipate those changes and manage them by evaluating trends that impact their own portfolio. And they need to continue to invest in and establish partnerships that provide them with a competitive edge on analytics and technology.

Nidhi Verma is senior director of research and consulting for TransUnion.