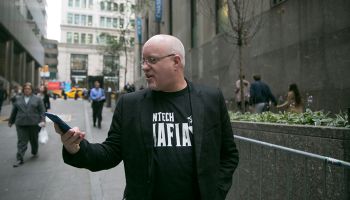 Would Brett King, fintech author and founder of Moven, have opted for a fintech charter if one had existed when the company started?

Brett King has made a specialty of shaking up financial services, beginning with his 2010 book Bank 2.0: How Customer Behavior and Technology Will Change the Future of Financial Services. He continued with Bank 3.0; Breaking Banks, and most recently, Augmented.

Something that set King apart from the typical consultant-guru was that he wasn’t content to just talk about evolving banking and insurgent fintech. He wanted to get into the game. And he did, by founding Moven, a fintech specializing initially in a debit card account/app designed to help people keep track of how they spend their money, and to help them rein in spending in various categories when it grows too far.

Moven works with CBW Bank, a community bank in Kansas. But what many don’t know is that King, known for his “Breaking Banks” internet radio program, initially tried to start Moven as a bank.

As the Comptroller of the Currency continues to review the 100-plus comments received on its fintech charter proposal of last year, a recent speech by Philadelphia Federal Reserve President and CEO Patrick Harker suggested that fintech companies should seek to become regulated entities now, rather than submit to regulation down the road in a sort of “Son of Dodd-Frank” crisis atmosphere. (Those are our words, not Harker’s. Read more in “Fintechs, you want to be regulated.”)

It is hard to imagine a bank ever asking for more regulation. Would a fintech, seeing banks’ experience, ever choose more?

We recently spoke with King regarding fintech regulation; the view of capital in banking versus in fintech; the attraction of a federal banking charter; how the Trump administration could affect the progress of financial innovation in the U.S.; how the U.S. approach to fintech regulation compares to progress made overseas; and more.

The following conversation has been edited for length and clarity.

Q. Brett, as a fintech player, how do you feel about Philadelphia Fed President Patrick Harker’s suggestion that fintechs should want to be regulated?

A. I definitely think that regulation is a fait accompli to some extent. It makes sense for fintechs to submit to at least a form of licensing so that they can have some credibility with their customer base. It’s important that they be able to tell their customers that they are a licensed entity.

The problem right now is that if you want to be a fintech bank in the U.S., you have to have branches. Unless the OCC’s proposal comes through, you need to plan to have at least one branch. That’s a problem for a fintech firm that is committed to an all-digital strategy.

That’s why we ultimately didn’t go down the charter path at Moven. If we could have obtained a charter that didn’t require a commitment to a physical network, we would have done it in 2010-2011.

Although that’s not the only problem. The chartering process is long and expensive. You’re essentially committing the bulk of your resources to the licensing process—including capital for the bank—instead of to building a technology.

As a startup engineer, you are committed to building a great customer experience, not to government regulatory processes. Moven looked into several situations where we might have taken over a charter. One was a troubled bank. Another was a family bank where the founder was retiring and his kids wanted to sell it, rather than run it.

And then it looked like we’d have to maintain any existing branch network.

All this would have consumed $2.5 million, between costs and bank capital, which was our entire seed budget. We wouldn’t have been able to do any product development at all.

When you look at most Silicon Valley startups, $2.5 million would be a huge amount of cash to get going with. But those kind of investors won’t deploy that into a government licensing process without any guaranteed outcome.

We would gladly submit to regulation for some sort of subsidiary or fintech licensing structure, such as what they have in Singapore, the U.K., and China, and such as what they are building in Hong Kong. If that type of process existed in the U.S., we’d do it.

But don’t expect us to be a full-service bank. That’s not what we’re aiming to be.

Q. Harker seemed to be coming at the matter from the viewpoint that fintech players are wholly unregulated now.

A. Well, that’s not really so. Take Lending Club. It is clearly regulated. Look at payments providers like Venmo—when it comes to cash in, cash out, AML, and know your customer, Venmo is regulated.

So I don’t buy that viewpoint. Any time you plug into the existing rails, the existing infrastructure, you have to submit to some regulation.

Q. Harker’s speech included a point I found interesting. He said regulation wasn’t just about protecting the consumer. He said it was also about “protecting the innovators.” Do you feel you need protection?

A. There’s a view that we in fintech need protection from cartels, or that we at least need a voice in the process.

A current example is the PSD2 initiative in Europe. That is going to be a big boon for fintechs. It gives them access to data, and the ability to use data in really interesting ways. [Editor’s note: The European Union’s Revised Payment System Directive would end banks’ monopoly on customer payment information and is intended to spur competition.]

However, many incumbent companies don’t want that to happen. That’s because it opens up innovation on top of their own platforms—innovation that they themselves haven’t been able to deliver.

The question becomes, should a regulator give incumbents more time to get their act into gear? Or should the regulator say to them, “If you guys can’t innovate fast enough, then it should be open market on this stuff. And we’ll see how the fintechs do.”

I don’t think incumbents should get an advantage, where they are able to limit fintech’s scope, just because they don’t like the competition.

If you look at the current administration in Washington, there seems to be a shift toward supporting incumbents. That means you limit the amount of innovation occurring in the market. Conceivably that could mean that within five to seven years, the U.S. market may no longer be competitive, because it hasn’t innovated fast enough.

The view of progressive regulators in the U.K. and Singapore is that the only way to have a competitive economy and financial services sector is by encouraging innovation. That’s why they are aggressively courting fintechs, creating “sandboxes,” and so forth.

The U.S. has already seen this play out. Take EMV. If the federal government had mandated that all banks shift to EMV then the end result would have been less fraud and more innovation around payments. Instead, the U.S. did 23% of the world’s card transactions last year, but had 54% of the card fraud.

The more you favor incumbents, the less pressure they face to change, and the market, as a result, moves more slowly.

Q. What do you think of the OCC’s fintech charter proposal?

A. I’m pretty positive about it. We’ve talked about it at Moven. If it is adopted, we’d look at participating and possibly making application ourselves. That’s subject to the board’s approval. But we think the charter proposal is a great move. If the U.S wants to be competitive with markets like London and Singapore, this is not optional. It’s really a necessity.

Q. In the OCC’s first set of decisions regarding innovation—which came before the fintech charter proposal—Comptroller Thomas Curry made it clear that the idea of a regulatory sandbox, enjoying some degree of regulatory shelter, was not favored. Compared to what’s going on overseas, do you think this is a mistake?

A. Not necessarily. A sandbox is a nice way of handling this, but it’s not the only way. The alternative is to say, “Come to me if you’ve got an idea that represents an innovation that doesn’t fit with existing regulations. I’ll give you an exception. I’ll give you a waiver.”

I’ve met many regulators with the previous administration, as well as the previous White House staff and other presidential advisors. I’ve never met a regulator who wasn’t open to someone trying something in market and sharing the results with their agency. That’s because regulators—smart regulators—want to learn as much as fintechs do about what works and what doesn’t.

Q. You’ve been on the U.S. scene for a number of years now. How have U.S. bankers evolved in that time?

A. They’ve gone from denial of change to acceptance to saying, how do we tackle this? There’s been a mind shift, collectively, among banks.

I used to visit bank boards and directors would say, “I’m retiring in a couple of years. Let’s put this off. It’s just too hard.” Now boards are getting on with dealing with change.

There’s still some segments that remain in denial. Some of the smaller banks still think great service by itself will win out in the end. They think they just have to get customers back to branches. Yes, there’s still that bit of denial. But it’s growing less and less.