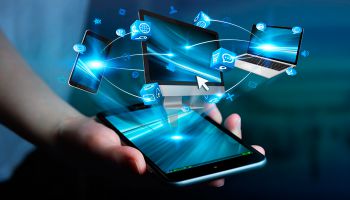 “Nothing’s yet making me think, ‘Wow!’,” says Schwanhausser, director of omnichannel financial services at Javelin LLC. “I see hints of promise in what banks offer, but I don’t get moved very often.”

The digital banking services that Schwanhausser sees in the course of his research demonstrate a stage that he refers to as “transactional competence.” That means providing the functions that a bank absolutely has to provide through mobile devices if it wants to go on being a bank, in his view.

“This is the stuff that, if you can’t do it, get out of the business,” says Schwanhausser.

But none of it is innovative. At best, he suggests in an interview, it amounts to “polishing a commodity.” While some banks do a much better job than others, he says, none have advanced beyond those basics.

So what is missing? “I see very little in my day-to-day use of digital banking that gives me inputs that I didn’t provide myself,” Schwanhausser explains.

He would like to see digital service provide a greater sense of empowerment, putting into people’s hands the functionality to tell them what they don’t already know. Insight and advice, he says, would be a welcome addition to the current lineup. He wants to see functions that tell the user how they stand today; help them decide where they want to go, financially; and advise how to get there.

Digital banking content remains stuck, Schwanhausser says, in the era of “simple stuff.” Isn’t there anything that comes up to this standard?

“I’m waiting to be wowed,” the consultant says. “My eye is five years down the road.”

Asked what he has on his handheld now, Schwanhausser ticks off a bunch of personal, business, and convenience apps—even a text message about how he feels about eggplant with dinner.

Only 18 inches from his eyes, on his iPhone, he says, he has an array of software that “is keeping track of a complicated life.”

“There is so much about my life on this device that you might as well connect it to my spinal cord,” he says. He thinks that when banks learn to bring their digital apps up to this level of importance, they will end up re-defining the boundaries of what personal banking means.

A nonbanking example that Schwanhausser cites as an ideal is the Netflix app. Why? Everything about it keeps the user in the Netflix system. In a single screen, the app promotes new offerings; displays uncompleted viewings that can be picked up on any device where the viewer left off; and suggests other offerings of potential interest. That makes an interesting blueprint for a banking app.

Lots of room to grow

Not that banks are incapable of meeting his hopes. “I’m an eternal optimist,” says Schwanhausser. He points to features that he already thinks have taken the industry closer to where it needs to be. One example: the ability to quickly turn payment cards on and off via handheld device.

“That’s the kind of thing that is only possible because of the digital element,” he says. No call center, no branch request. Just a switch and the card goes off.

One key point, an essential to take away from the project, really, is that bankers must take the mobile-first user quite seriously. The study reported that almost one in three customers attempting to enroll in a new service begin that application on a smartphone or tablet. This is almost the same portion of the group that started the application process at a branch.

“This is a wake-up call for any banker who contends consumers are unwilling to fill out forms on small screens and keyboards,” the study states. Even the “fat fingered” like the convenience, or potential convenience.

The desire to open accounts on mobile devices is there—but thus far the typical performance is quite weak. Only one out of eight consumers who begin by applying for an account on their device finishes the process on that device. Instead, some 67% must continue through one or more additional channels to complete the process. By contrast, about 65% of branch applicants start and finish the application process in-branch. 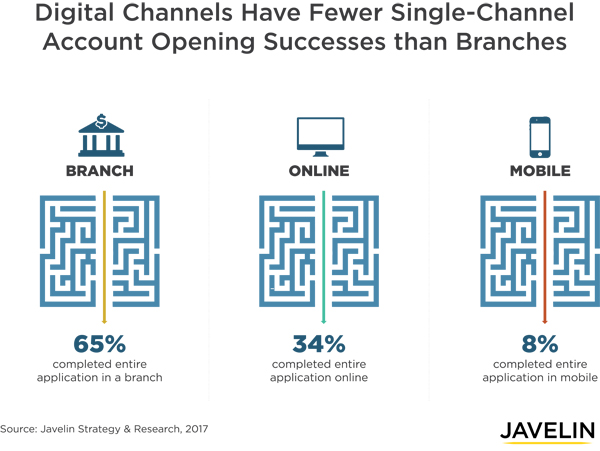 In addition, according to the report, “there is a risk of abandonment every time an applicant switches channels.” As a result, producing a superior mobile experience will result in that much less loss of potential business.

In this regard, the Netflix experience differs from banking. A viewer may or may not resume viewing of a program previously begun on the same device or another, but for Netflix this is the customer’s option and, for most offerings, has no impact on revenue as Netflix subscribers pay a flat fee for their main service.

Thinking outside the channels

Javelin’s paper breaks the customer enrollment process into five stages, at any of which the succession of steps can be “fractured” and discontinued. They are:

1. Researching options among offering by the bank and other providers.

3. Seeking help or advice from the bank.

4. Providing documentation, such as a driver’s license for ID.

Ideally, digital channel improvement will enable more applicants to finish where they began it, digitally.

“Given that end-to-end success in a single channel is so elusive, financial institutions have no choice but to perfect a process that builds on the strengths of each channel and knits them into a satisfying process than can close a deal,” the report states. “For example, enabling online applicants to use their smartphone to submit a license or other documentation is likely to cause less abandonment than forcing applicants to visit a branch.”

Schwanhausser says that banks must work on ensuring that their channels don’t fight with each other, both technically and organizationally.

In regard to the first point, banks must avoid having customers re-entering information that they have already provided at another stage or in another channel in the application process. In today’s world, the frustration level is real.

But the bank overall must avoid setting channels at odds with each other. For Schwanhausser, successful banks will be those that make account opening and onboarding a corporate mission, not one where different channels see themselves as competing with each other for kudos. Digital avenues, the call center, branches—they must all work as one team, he insists.

“Competing interests have to come together,” says Schwanhausser. “The message has to come from the top.”

The consultant says the change in tone must come from the bank’s CEO, but the changes in practices, protocols, and attitudes will likely touch the bank in multiple places. A new customer onboarded represents cross-selling potential for everyone later, but developing “cooperation, coordination, and compromise,” according to the report, will impact compensation and cross-selling incentives; operations; marketing; risk assessment; compliance; and all elements that go into the customer experience.

More than interestingly, the study found that more than two in three consumers enroll in mobile banking during the onboarding process.

One pet peeve of Schwanhausser is that comparison shopping for financial services—both among a single organization’s multiple offerings and between multiple providers’ menus—proves difficult. The handheld screen doesn’t readily lend itself to side-by-side displays of different options. True, a handheld’s web browser can open multiple windows, but there is no way to show those simultaneously, as you could on a desktop or laptop. By contrast, centralized sites that guide consumers to various dining options can show overall menu pricing and other such issues all on one screen, or at least all in one scrollable listing.

Another criticism that Schwanhausser levels at banking app designers is a prevailing attitude that they are primarily producing a look and feel for millennials. He feels this shortchanges many consumers who aren’t considered in the design process because they are considered too old to use the apps.

That simply ignores reality, he says. “These consumers are there, these applicants exist.”

This criticism—rethink tiny type that’s hard to read on a mobile screen, he says—rolls into Schwanhausser’s view that banking apps must be designed to produce a friendlier screen with less friction. Pages should be simpler, he suggests, and the flow of processes smoother.

Part of what has made handhelds take off, he adds, is the many kinds of functions all built into one small package. Geo-location features, cameras, and digital communication can all be applied in ways to make the onboarding process friendlier, he believes. The study found that fewer than one in four applicants uses online (14%) or mobile (10%) when they needed to provide documentation—and this in an age when remote capture of checks has become common with mobile devices.

Most of the three out of four applicants supplied their documentation by visiting a branch (37%), by mailing it (16%), or using multiple channels (20%).

“No banker would find it acceptable to tell a prospective customer who walked into a branch, ‘I’m sorry, but you must drive to a branch across town to open the account you want’,” the study observes. “Yet that is effectively the message consumers get when they seek to open accounts in digital channels but learn that they’re unavailable or that the process is too complicated to be completed in a satisfying manner.” 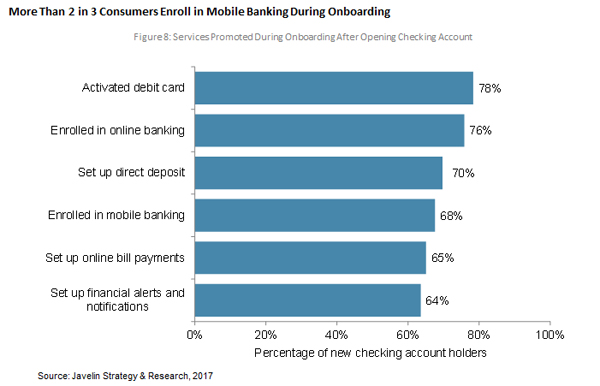