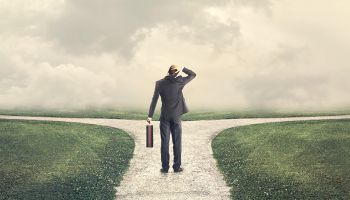 Part two of a two-part series: Wrestling with a major customer-impacting decision in the U.K. gave Varo Money leader a perspective that informs his new U.S. venture. Other institutions may face a similar choice in the future.

Colin Walsh hasn’t quit retail banking. But you could say he’s a “reformed banker,” now in the fintech community as co-founder of Varo Money, a mobile-only “bank” and “financial coach” launched on June 14.

As a retail banker for much of his career, Walsh has had a window into how things get done—or not done—at several large, mainstream financial institutions. The experience shaped his views on “good” and “bad” revenues, and lay the groundwork for the creation of Varo.

In an interesting twist on the usual fintech story, Varo Money has applied to the Comptroller’s Office for a full national banking license. If successful, then the quote marks will come off “bank” and the company will become Varo Bank, N.A.

As recounted in part one, "What Varo Money’s Colin Walsh has in mind," Varo Money can offer deposit accounts and payment services by virtue of an arrangement with The Bancorp Bank, Wilmington, Del. But the venture’s reason for being was to redesign the banking experience so it would be “loved and helpful for consumers,” as Walsh put it in an interview.

At least initially the company is focusing on millennials who don’t pay a lot of attention to their finances. With features currently available or soon to be available, the Varo Money mobile app (iPhone only at present) will proactively monitor customer’s financial situation and make suggestions using artificial intelligence and an in-app “bot.” Suggestions could be to encourage savings, reduce spending, or, in cases where cash flow is thin, take out a short-term loan to get over a rough patch. Varo Money is a lender as well, with licenses in 11 states.

Notably the company does not charge fees for most of this. The only fee Walsh mentioned in an interview was a $2.50 charge for using an ATM not part of the surcharge-free Allpoint network, to which Varo belongs.

Part One presented Walsh’s answers to questions relating to what Varo Money is and what it does. Here, we present his answers, edited for clarity, to questions regarding the future direction of the banking industry, as well as the impact regulation will have on the future Varo Bank.

Banking Exchange: In a podcast with fintech observer and entrepreneur Jo Ann Barefoot, you used the term “bad revenues” in connection with banks. Can you explain what you meant by that and what “good revenues” would be?

Walsh: About ten years ago I was running all the cards and payments businesses for Lloyds Banking Group. Literally within six weeks of my arrival, the U.K. Office of Fair Trading made a rule change saying banks could no longer charge default fees, which were late fees and over-limit fees and others above a certain amount. Essentially that ruling put a £60 million hole in my P&L.

So I had a couple of options. One was to go tell the board and my boss that I wasn’t going to hit my financial plan, or I could try to figure out how to close the hole.

I pulled my team together and said, “We’ve got to figure out how to close this hole.” And very dutifully they came back a week later with 200 recommendations for closing the profit hole. As I went through them line item by line item, I thought, “This is horrible.” They were all things like increasing cash advance fees and changing payment hierarchies. The team had figured, “Lots of people in the industry do these things.” I said, “But who are the people that ultimately pay for this? Our customers, who can least afford it.” 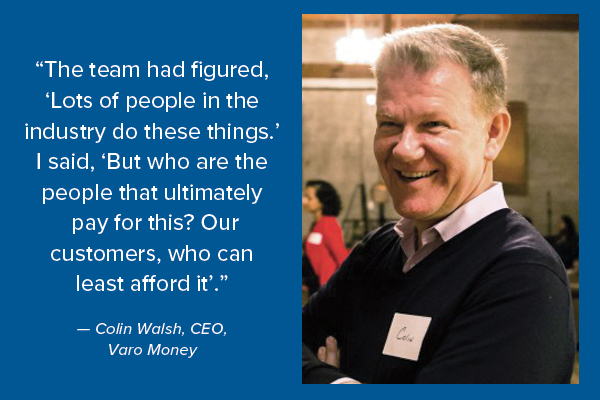 Luckily my boss didn’t fire me and I promised that I would make it up through good revenues.

So I got my team back together again and we decided that we were going to go and create the best mileage program in the U.K. So we created the first duo card, which was a combination American Express and MasterCard and we launched it with great fanfare. We acquired a million customers in the first year and paid back that £50 million many times over.

The story is really about bad revenue versus good revenue. In my mind good revenue is when your incentives are aligned with your customer and you’re doing things that actually are creating real value for customers. As opposed to just finding ways to engineer a P&L and extract fees from customers who really don’t understand the products very well because there’s not a lot of transparency.

It was one of the things that started shaping my view of wanting to create this bank of the future that actually did the right thing for customers and used technology in ways that you probably couldn’t do back then but you can do now to help customers get ahead.

Banking Exchange: Do you see the fintech movement as truly transformational for the banking industry?

Walsh: I really do. The big innovation is the simplicity and the amount of friction we’re taking out of the process to help customers manage their money and get to a better outcome in a way that feels really easy.

As I mentioned earlier our target customers are those hands-off consumers who would much rather get on with their lives than have to deal with financial problems. Having it all right there at their fingertips with everything just a few taps away becomes an almost Amazon-like experience, which I think is going to be incredibly transformational.

It could end up being fairly disruptive to some of the incumbent players. Large banks have a very difficult time innovating because they have inertia and the complexity associated with legacy technologies. They also have many product silos and fiefdoms. The data doesn’t necessarily flow very well between them to create a single view of that customer relationship. And even if it does, you’ve got P&L owners that are trying to optimize their P&L, whether it’s mortgages or credit cards or checking.

Having spent so many years inside that system I know there are things that work well, but there are many things that become an impediment to innovation.

Right now at Varo we’re on, I think, version 90 of our app, and I only started the company about 19 months ago. If I were still at Amex I’d be 400 years old by the time we got to version 90 of anything.

Banking Exchange: Okay, but banks like JPMorgan Chase, Bank of America, and others have incredible revenue flows and legions of talented people. They seem quite capable of doing some of the things that Varo does. Is that not true?

I can tell you from our research that there are a lot more than 1% of their customers that just hate them because they charge $35 overdraft fees and minimum balance fees. And they’re difficult from a policy perspective. There are not a lot of credible alternatives yet. So if we can be that credible alternative, and we can take 1% of their customers from each of those big banks we’ll have a very successful business.

Banking Exchange: Some fintech startups end up being acquired, by a large bank or a large technology company or someone else. Simple is one example—acquired by BBVA in early 2014. Is that a possible scenario for Varo?

Walsh: It’s certainly not an outcome I would foresee. We are several years from the Simple/BBVA deal and the technologies have evolved, the business models have evolved.

One strategic benefit we have is just the pace, the velocity at which we’re innovating. 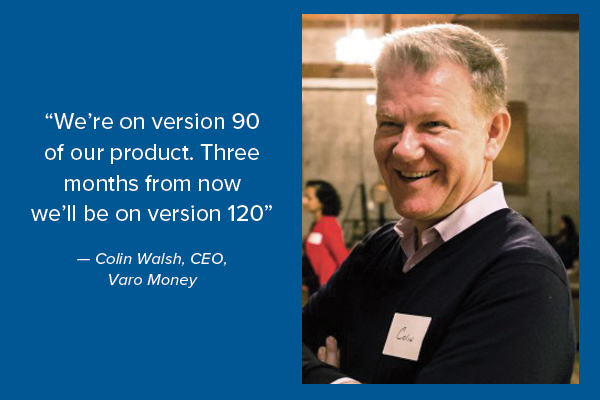 As I just mentioned, we’re on version 90 of our product. Three months from now we’ll be on version 120. We’re able to move at such a rapid pace it would be hard for a more entrenched incumbent to move at that speed. And so I think what we’ve created could be really interesting and valuable to a traditional player to bring in millennials. But that’s not the future that we necessarily foresee for ourselves. I really see Varo as becoming a brand and becoming a real viable “High Street competitor,” as they say in the U.K.

Banking Exchange: When you become a chartered national bank, assuming your application is approved, you will of course become fully regulated. Won’t that slow down your development time?

Walsh: That’s a good question. But I think if we do it right and we build it in a way that the regulators are comfortable with, it won’t impede our ability to continue to innovate, and to continue to deliver great solutions to consumers. A lot of what we do is based on very active customer listening and incorporating things that customers are asking for; changing things that customers don’t like.

I don’t think any of that will change. If anything I think it will be encouraged, as a regulated entity. And the fact of the matter is that I and my co-founders and others in the company have spent many years working in regulated financial services businesses. We’ve worked for companies that have run into some problems and worked through that.

Those experiences are invaluable in terms of our ability to anticipate what regulators are going to be looking for, and to just understand what good practice is from the outset.

Also, being a regulated entity puts us squarely inside the system as opposed to trying to innovate on the periphery.