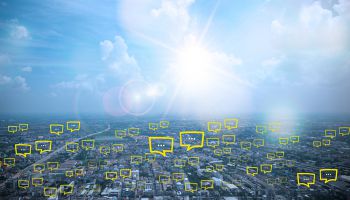 Wells Fargo is the only bank thus far to sign on for Apple's new consumer-to-business texting service.

The day may come when voice-assistants dominate communication between banks and their customers. But for now, texting rules.

People increasingly aren’t calling banks or other businesses or even each other, noted Kimarie Matthews, senior vice-president, Wells Fargo Bank, in an April 12 presentation. They prefer to use messaging in one form or another.

Matthews, who is responsible for virtual channels operations and social care at Wells, was a speaker at Efma’s Bank+Fintech conference, the European financial services group’s first U.S. event. She said the reason many people don’t text more often with banks and other businesses is because they don’t know who to text. That is what Apple Business Chat is going to fix, she said.

Apple announced Business Chat at its Worldwide Developers Conference last June. It is designed specifically to enable consumers to conduct business with companies via text message. The product became operational at the end of March when four large companies, including Wells Fargo, the only bank, began letting customers use it in some markets. The other companies are Hilton, Discover, and Lowe’s.

Remain anonymous if you prefer

Business Chat makes it easy for a consumer to look up a company and start a message in the same “location” as they’re doing all their other texting—the iMessage app that comes with every iPhone sold, said Matthews. Customers can look up how to text with Wells Fargo using Safari (Apple’s web browser), Siri, Search, or Maps, she said. They just touch the message “bubble” to connect.

“People don’t have to sign on with a social profile and reveal everything about themselves,” said Matthews, referring to Facebook and similar social media services. She acknowledged that many people don’t mind that, but said Apple’s new service gives customers a choice. They are anonymous to the company they are messaging until they choose to tell more about themselves.

Another key point: Only the customer can start a conversation with a company, not the other way around. They can also stop the conversation whenever they choose and pick it up again. By contrast, she explained, when you call in to customer service, you really don’t want to interrupt that conversation once you’ve gotten someone on the line.

It is not the first or only messaging service people can use to reach a business. Facebook’s Messenger product has been used by businesses for that purpose for some time.

Asked if Wells uses Facebook Messenger for customer service, Matthews said they have done so for years, but “there is only so much we can do there and still protect our customers’ privacy and security.” Using a one-time passcode allows the bank to do a few simple things for customers on Facebook. But, she said, “for a lot of things we try to move them out of Facebook to a more secure channel.

But, as is often the case, Apple came later to the game and brought its own unique features, such as allowing iMessage extensions. Matthews explained how these allowed Wells Fargo to solve the security and privacy issue.

Apple allows iMessage extensions within Business Chat, so that a company can bring in any feature from its own app into a message string without the agent or customer having to leave the message function. In the bank’s case, it’s using this feature to bring in its authentication function,” said Matthews.

In her presentation, Matthews demonstrated how it works. She used a simulation of a customer texting a Wells Fargo employee regarding a misplaced debit card:

Customer: I can’t find my debit card, can you help me?

Banker: I’m sorry to hear it. If you think the card has been misplaced, I can turn it off for you. Would like me to do that?

Customer: Yes, please turn it off while I look for it

Banker: I’ll need to verify some information. Is that ok?

Banker: Great. I’m going to send you a sign-on request. Please tap to login so I can review your account

The customer then sees a padlock icon with the words “Wells Fargo Sign On.” When they tap the padlock, “a little curtain slides up,” said Matthews, showing Username and Password boxes and a “Sign On” button.

“If they have touch ID or face ID set up on their iPhone,” said Matthews, “they can just touch those and they’re authenticated. Then the curtain slides back down and they’re still in the conversation with the banker. And no information has been passed through Apple Business Chat.”

Continuing the simulation, the bank representative at that point, following Apple’s preferred “touch not type” philosophy, shows a “list ticker” of the customer’s cards so he or she can simply click the card that needs to be turned off rather than having to type in a card number.

Apple Business Chat communications occur within the Apple system, said Matthews, so telecommunication companies are not involved. As a result there are no concerns among customers about being charged for exceeding their data plan.

“You’re operating on a completely separate set of rails called iMessage,” she added.

More than one way to text

Going forward, said Matthews, the bank will build out the Business Chat experience with other features like setting up an appointment.

“Anything you can do in your app you can do in this conversational interface,” she said. One of the problems with apps, she continued, is that you’ve got to open them and then go find the feature you need. “Now customers can do whatever they need without having to leave the messaging function.”

“Apple challenged our thinking,” she continued. “They said, ‘Don’t make customers come to your website or your app. Bring it to them’. They provided lots of feedback on how we could make the process more seamless, and faster. More than that, said Matthews, “Apple wants every business customer using iMessage to feel like a VIP.”

All this seems right out of the Steve Jobs’ playbook. In fact, Matthews said companies have to apply to use Apple Business Chat and that Apple will have to feel confident that a company will meet Apple’s experience expectations so customers will know what to expect.

Nevertheless, apps remain very important and later this year Wells Fargo will build a messaging feature within its app.

“An app is a very natural place for a customer to want to reach out while they’re looking at their account,” Matthews observed. Based on its experience working with Apple, she added, this feature will be set up to be like Apple iMessage.

Live responders only, at first

Currently all incoming text messages are being answered by live bankers, said Matthews. Down the road, the bank will set up the service to use automated assistants.

Matthews noted that Apple is not looking for companies to create bot-only channels. It doesn’t want its iPhone users to have to go through multiple bot-answered questions where the bot doesn’t “get it.” The company wants a human to step in right after the first miscue by a bot.

“This absolutely jibes with our philosophy about how automated and human assistants should work,” said Matthews.

Matthews said other companies that make more use of messaging had told her that messaging costs were lower per contact than phone costs. One reasons why, she explained, is that “with the phone, the agent—and the customer—are tied up on that call.

Even with live chat—the function often found on company websites or in their apps—an agent can only handle two to three connections at once. With messaging, agents can handle many more communications at a time.

“We consider live chat to be the first generation of messaging,” said Matthews. “We’re looking at how to transform our customer service away from the phone and towards messaging in a scaled way.”

Right now, however, the bank’s focus is on creating “an amazing customer experience. Matthews gave an example.

“Apparently a year’s worth of small minor questions just came flooding out,” said Matthews. “But at the end the customer sent 20 heart and star emojis saying, ‘This is the best customer service ever!’”

Matthews surmised that the reason the customer had so many questions is that it takes too much effort to call.

“Customer experience is what we’re going to focus on,” she said, “and the operational efficiencies will come, especially once we fold in the automated assistant.”