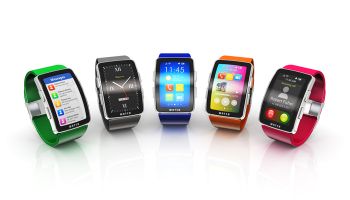 By now the concept of wearable digital devices, as well as the related concept of the “internet of things,” has pierced the mainstream culture, as evidenced by Cisco’s network television commercial, “The Internet of Everything.”

The application of wearable technology as it relates to financial services also is starting to penetrate the collective consciousness. Witness the recent announcement by The Members Group of a wearable payments app designed for Google Glass.

It’s also true, though, that while people generally are aware of such things, exactly how eagerly or quickly people will adopt them—and how quickly the costs of research and development, distribution, marketing, and general provision of such capabilities can be recouped for a profit—is still up for debate.

For example, Credit Suisse said in a report earlier this year that wearable technologies could be a $3 billion to $5 billion market over the next three years, or ten times what it was. “As the market for these new technologies explodes, it will set off user expectations for an instantaneous seamless transition of everyday digital activities—banking included—to these new devices,” it says.

On the other hand, Forrester Research says in a recent report that while wearable devices are on the rise now, by 2016 their functionality will be absorbed by other devices. “The digital era has witnessed the ascent and decline of a stunning number of new devices: the PDA, the digital camera, and the MP3 player have all risen to prominence only to collapse into specialty niches in a way that prior generations of technology did not,” says James McQuivey, vice president and principal analyst at Forrester.

Speaking of new wearable devices on the drawing boards now, how about smart sleeves? Or better yet, smart wigs?

• Heritage Bank, in Australia, is piloting a business suit made of the finest merino wool with a built-in contactless payments chip and antenna that allows wearers to make low-value payments by brushing their wrists against Visa payWave terminals.

• Sony, for its part, is seeking a patent for a “SmartWig,” or hairpieces that have built-in sensors that may, depending on the model, include a camera, laser pointer, or GPS sensor. Whether or not the concept can be commercialized is still being researched, Sony admits.

To this end, Scott Hess, Fiserv vice president, talking at the spring Finovate financial tech demonstration, provides these compelling reasons: “There are several use cases of wearables for financial institutions, including notifications, bill pay, funds transfer, alerts, and access to account information. Financial institutions are also investigating banking apps for wearables that enable consumers to connect with a bank representative, find an ATM, or pay for an item by taking a picture of a QR code, among other functions.”

Wearable tech conceivably could benefit a bank by bolstering customer relationships. Says Jacques Barkhuizen, CIO of Deloitte South Africa, “Most [banks] place the customer at the center of everything they do. Already they are developing profiles of customers using transactional and social data. Now with sensory data, this takes it to a completely different level. There could be significant financial benefits for an individual with this more-tailored approach that will be completely unique per customer with very little effort.”

Juniper Research has looked into this, particularly in the area of bill payments, and notes that various vendors are working to integrate wearable technology as yet another delivery channel. The reason: Millennials.

“Customers, particularly those of Gen Y, are attracted to banks that offer innovative and exciting new services. Banks are eager to capture these customers early and achieve lock-in. The ability to offer cutting-edge banking applications and services is also a way for banks to secure customer loyalty and increase customer satisfaction,” says Nitin Bhas, analyst at Juniper.

One obvious barrier to wearable technology acceptance—now—is the cost. A pair of Google Glasses, for example, goes for $1,500. Smart wristbands, such as those used for fitness purposes, can go for $50 to more than $100. Juniper Research, however, opines that this could change as Chinese manufacturers start to enter the market with knockoff products.

For example, it cites the introduction of the Mi Band fitness wearable offered by mobile phone maker Xaiomi, that’s priced at the equivalent of $12, with improved security features and a battery life of 30 days. Lenovo, the Chinese PC maker, is piloting a smart glasses prototype with a neck-mounted battery that probably will be offered at discounted prices.

“These devices and business moves are, if successful, set to redefine wearable capabilities and bring them to a wider audience than China itself…That could redefine what passes as standard in the currently very U.S.-centric wearables market,” Juniper says.

All of which serves to put wearables and financial services in perspective, at least for now. Vendors and analysts both offer very qualified but generally optimistic views of the future.

Javelin Strategy and Research generally says that “wearables present an immediate opportunity for financial institutions that can embrace inevitable experimental setbacks and capitalize on breakthroughs.”

More specifically, Mark Schwanhausser, director, Omnichannel Financial Services at Javelin, says: “For financial institutions, justifying investments for wearables is likely to start with bolstering a tech-savvy brand image that can attract customers. But larger, sustained investments will require evidence that wearables are pervasive enough to result in cost savings and revenue.”

Fiserv’s Hess puts it this way: “The devices themselves, as well as consumers’ perceptions, have room to mature. Wearable technology needs to actually solve a problem, or solve it in an easier way, than without the device if it is to move beyond a niche audience and into the mainstream. These are early days, but this is the time to be exploring how wearable technology can enhance consumers’ financial lives.”

The Future of Wearables Is to Be Re-Made in China

More in this category: « Awkward time for CIOs Innovation seems fun—until your future depends on it »
back to top