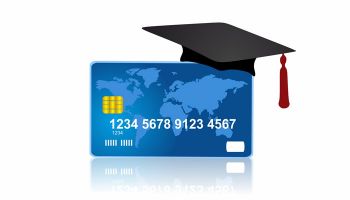 A report by the Consumer Financial Protection Bureau shows a nearly 70% decline in the number of college credit card agreements since Congress passed new disclosure requirements in 2009.

These findings highlight the trend of marketing partnerships between colleges and financial institutions evolving from credit cards toward other products such as debit and prepaid cards, which generally have fewer sunshine protections. The report also indicated that most colleges with credit card agreements do not make those agreements readily accessible to students and families.

“Today, financial institutions are cutting more deals with colleges and universities to market student banking products that require less disclosure,” charged CFPB Director Richard Cordray. “Schools and financial institutions should be up front on their website with students and their families about whether or not the school is being compensated to encourage students to use a specific account or card product.”

A lack of transparency in the student loan and credit card markets led Congress to enact reforms to impose more disclosures to help the public better understand the marketing partnerships between colleges and lenders, CFPB says. In 2008, Congress passed a law requiring schools to disclose preferred lender arrangements with student loan providers and establish a code of conduct for school officials.

In 2009, Congress passed the Credit Card Accountability, Responsibility, and Disclosure Act. The law requires issuers to disclose to CFPB the terms and conditions of any college credit card agreement, the number of new credit card accounts, and the compensation paid by issuers to institutions of higher education in the previous year.

In order for students and the public to identify marketing agreements currently in effect, Congress further required that colleges and universities also publicly disclose these agreements. CFPB is required to submit an annual report to Congress about these agreements, and to make the report publicly available.

In researching this report, the CFPB found that:

CFPB found that credit card issuers paid over $84 million to colleges and universities in royalties and bonuses for agreements in 2009. That amount dropped to approximately $43 million in 2013.

According to a report from the Government Accountability Office, there were at least 852 schools that had agreements with companies to market debit or prepaid cards to students in 2013. Unlike credit cards, these products do not have specific requirements in federal consumer financial laws to disclose their marketing partnerships.

CFPB reviewed 35 college and university websites to determine if they made their credit card agreements easy for students and families to find and access. The bureau found that 80% of these institutions—28 of 35—do not put their agreements, or information about how to request them, on their websites.

In addition to credit card agreements, CFPB is closely monitoring the marketing arrangements many colleges and universities have with financial institutions related to deposit accounts, prepaid cards, debit cards, and other financial products. Investigations by GAO, the Department of Education’s Inspector General, and others have raised numerous concerns about conflicts of interest in these deals and their impact on students, CFPB says.