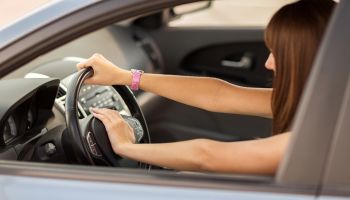 Do you routinely honk at the car in front of you once the light turns green?

Do you always pass slow walkers on the sidewalk?

Press an already illuminated elevator button in hopes of getting to your destination faster?

If so, you're not alone, according to a Fifth Third Bank survey that found: More than half of Americans admit to honking after the light turns green; most will wait ten seconds or less before passing a slow walker on the sidewalk; and 72% of Gen Yers admit to pushing an already lit elevator button.

Fifth Third created the survey to underscore America's need for speed in everyday tasks. This universal impatience is what led Fifth Third to wonder how it can help make daily banking activities even more efficient for its customers.

"Patience may be a virtue, but it's no longer a reality," says Maria Veltre, senior vice-president and chief marketing officer, Fifth Third Bank. "In our increasingly fast-paced society, every second counts. This was the driving force behind our faster mobile app, which takes the wait out of banking and makes it easier for our customers to get what they need and get on with their busy day."

Fifth Third wanted to know how "insanely impatient" our world has really become after having developed new features to give the gift of time back to its mobile banking customers.

It commissioned a national survey that revealed a surprising disconnect, with nearly 80% of respondents rating themselves as being patient, but in reality:

• 96% of Americans will knowingly consume extremely hot food or drink that burns their mouth; 63% do so frequently.

• More than half hang up the phone after being on hold one minute or less.

• 71% frequently exceed the speed limit to get to their destination faster.

• Americans will binge-watch an average of seven TV episodes in a single sitting.

• Nearly a third of respondents ages 18-24 wait less than one second before bypassing a slow walker.

• Gen Yers check their phones an average of eight times when waiting to hear back from someone they've dated.

• When waiting for a table at a restaurant, nearly a quarter of respondents ages 18-24 wait less than one minute before approaching the host again after the wait period has passed.

• Check Balances and Transfer Funds Quickly: “Now Balance” allows customers to check their account balances without signing in—simply by swiping to the left on the log in screen. Customers can transfer money seamlessly between accounts in seconds.

• Deposit Checks: With Fifth Third's “App, Tap, Deposit” feature, taking a photo of a check to be deposited is now automatic. The bank even takes the picture for the customer. Deposits made by 8 p.m. ET will post the same business day. (Two accounts, Basic Checking and Access 360° are not eligible for mobile deposit.)

• Mobile Bill Pay: Customers can pull bills out of the mailbox, then pull their phone out of their pocket. They can set up a new bill payee and pay bills easily, right from the mobile app. Most payments made by 4 p.m. Eastern are paid the next business day.

• Instant Alerts: Provides customers with immediate information on account and online security and instant notices for card and spending activity. The bank automatically sends security alerts if they notice any suspicious activity or changes to the customer's information. Plus, alerts make it easier to keep track of balances when a customer signs up for card and balance alerts.

• Text Banking: Customers can text one of the short commands to 535353 and the bank will reply back with information requested.