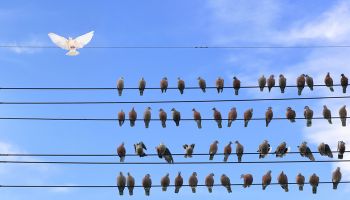 Stereotypes of the financial state of the millennial generation may not be doing those young people justice.

TD Bank has been studying various age groups’ behavior over the last few years as part of its focus on financial literacy.  In a recent survey, the bank and its research partner Vision Critical found that, in spite of stereotypes, only about four in ten young millennials—42%—rely on some form of family support. This belies the “living in the basement” viewpoint of these young adults exiting college and beginning their adult lives.

The bank surveyed 505 Gen Z (17-20) and young millennials (21-24). The same project found that the Gen Zers, being younger and often still in school, more typically receive family support—three out of four do. However, the research indicates this accounts for less than might be expected. Gen Zers receive an average of 24% of their spending money from family, versus 7% for young millennials.

For example, 61% of young millennials know their credit score, and 29% of Gen Zers surveyed do.

On average, young millennials have 3.3 financial or bank accounts, and Gen Zers have 2.4. (Saving is becoming a habit, too, as covered later.)

Both demographic groups face personal debt challenges not faced by earlier generations. The study found that student loans, especially, loom large in the thinking of both groups surveyed. More than a third of the two groups combined say they are extremely or very concerned about paying back student debt or personal debt, or both.

Young millennials surveyed average $27,286 in educational borrowings. And Gen Zers, who are generally only partway through their college years, already average $13,119 in school debt. Most of the latter said they expected to finish school with higher levels of debt than the young millennials faced

Johnson says it is encouraging to see Gen Zers showing such good money habits so early. She notes that financial literacy efforts have been growing in recent years, a factor potentially influencing this behavior.

They will need those habits, Johnson adds in an interview, “because they are coming into a much more complicated financial landscape.”

Although other research has indicated that U.S. teens are somewhat behind teens in other countries, Johnson says schools and other community groups such as scouting organizations are making efforts in financial education. TD Bank offers a range of lesson plans and resources covering grades K-12, under its Wow!Zone program. LINK: www.tdbank.com/wowzone/educators

Financial responsibility seems to have caught on among both groups. The survey found that 84% of Gen Z and 82% of young millennials manage to save something out of the earned or given income.

This is consistent with a broader survey that TD Bank published last spring. That research found that 56% of millennials characterized themselves as good savers, versus 43% of Gen Xers and 48% of baby boomers.

Paying bills on time also seems to have caught on: In the latest survey, 63% of young millennials and 47% of Gen Z report doing this consistently.

The earlier survey also found that millennials were most diligent about using their budgets consistently to manage their finances. Nearly six in ten millennials responding to that survey said they used banking and financial apps.

Regarding the future, the survey found that Gen Zers are focused on finishing school and finding that first “real” job. Young millennials, with a bit more time on their side, still rank their first job as the highest priority, but rank buying a home a close second.