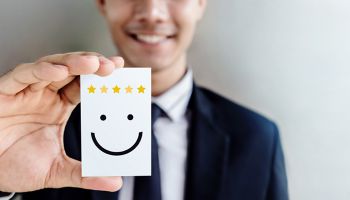 Happy customers are important, but there are more emotional facets to providing a superior customer experience as either a direct bank or a traditional bank, according to new research from Forrester.

Have you ever experienced “omotenashi”? More importantly, could your bank provide it?

This is the word the Japanese use to describe their cultural practice of providing service that, much as a chess master anticipates the game many moves ahead, anticipates the customer’s needs.

Forrester analyst Alyson Clarke has experienced such service multiple times. On a Japanese airline, a flight attendant brought her a drink. The drink came with a cover on it, because the air crew member had noticed that Clarke was using her laptop. The aim was to protect her machine. On a trip to Japan, Clarke was arriving quite late, with an early departure. The hotel took many steps to have her room ready for her to drop her bags and conk out instantly to maximize sleep.

Clarke, with extensive experience in banking in Australia, talks about this essential element of Japanese culture because she thinks it is something America’s banks could learn from. Forrester recently finished a round of studies rating customer experience across 314 brands across 21 industries. Two—traditional retail banking and direct online banking—relate specifically to bankers, but something was observed throughout the recurring study.

Why service is stalling at many brands

“Twice as many brand scores fell as rose; losses were, on average, bigger than gains,” sums up Forrester’s The US Customer Experience Index, 2017. “As a result, the number of scores in the excellent category fell to zero; the percentage of good scores dipped by one percentage point; and the percentage of poor scores rose by three points. For the first time, no industry averages improved, but three fell.” [Emphasis added.]

What explains this stagnation? Speaking first of the entire study base, Clarke says that “the leaders are pulling away and it's a struggle to keep up.”

Specifically regarding banking, USAA took the top spot for direct banks, making this the third year in a row the company came out on top. USAA scored a “good,” (75-84 points) which, while a winning score, reflected a slight decline in its numerical rating from last year’s study.

No direct bank scored lower than an “Okay” (65-74)—the Forrester system includes “Poor” and “Very Poor” ratings and some nonbank companies rated in the larger study came in with ratings below “Okay.”

The research is based on a survey of over 118,000 U.S. adults. The six elements factoring into the firm’s customer experience score are: effectiveness; ease; emotion (do customers feel good about their experience with the company); retention; enrichment, the willingness to buy more from the provider; and advocacy, the likelihood that customers will refer others to the provider.

“Direct banks and traditional bank score pretty highly,” says Clarke. But she adds that something that helps them score so well is that the nature of the services they offer lend themselves to ease and efficiency. Where banking companies tend to fall down are in areas that wow and delight customers because they stand out. 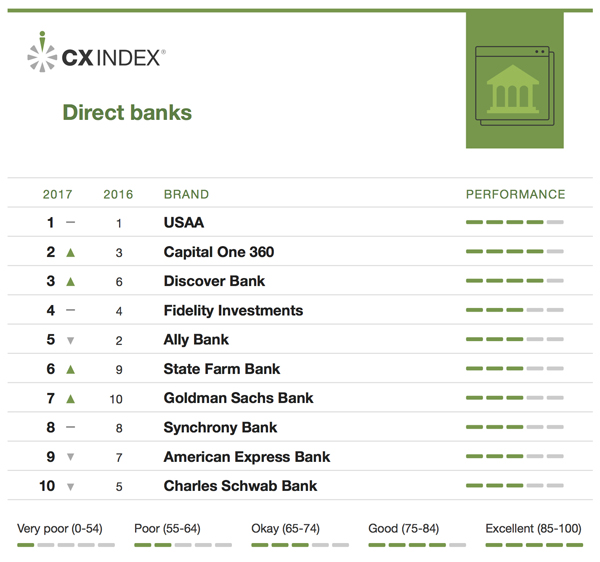 “I can do with one bank what I can do with other banks, pretty much,” says Clarke. “There’s no differentiation. And that’s when disruptors can take business away from you.”

Clarke notes that many speculate on what banking would look like if delivered by Amazon. She says Amazon Bank would likely deliver an Amazon experience, even if deep down it was relying on traditional banking plumbing. Banks could wind up becoming “dumb pipes,” she suggests, serving as infrastructure for someone else’s service innovations. 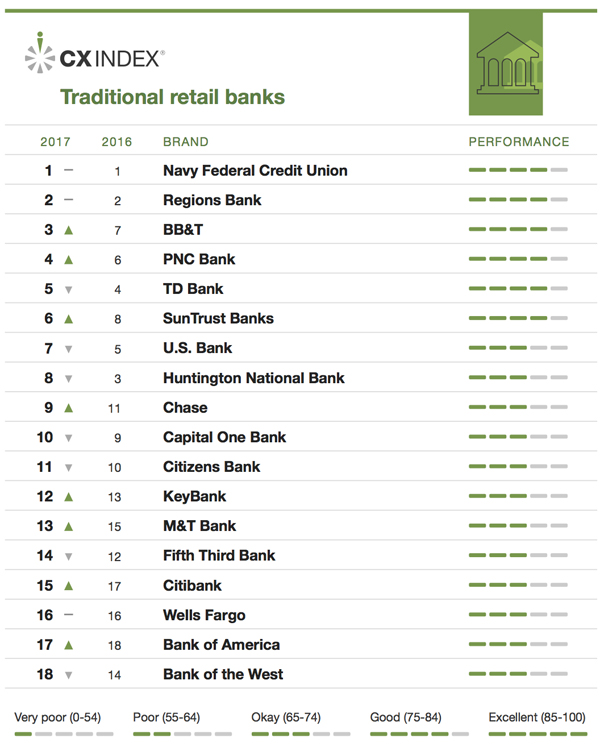 Clarke says the two standouts in the firm’s banking report, USAA and Navy Federal, for traditional retail banking, do so because “they don’t breathe without thinking how this step or that will help their members.” The attitude, she continues, almost borders on an obsession. Financial institutions at this level are approaching omotenashi, she suggests. (The Forrester research did not distinguish between the various types of institutions providing retail banking services.)

“They are not just out there to flog their customers another product,” she says. “Leaders have deep empathy for their customers. They are thinking one, two, three steps ahead.” Both organizations offer customers assistance with financial readiness, a form of financial literacy aid, which can help customers improve their financial health.

Beyond the fact that the leaders are pulling ahead, Clarke adds that the bar has become higher to reach excellent service.

“Consumers’ expectations are rising,” she explains. Quality customer service is the top driver for both types of institutions, direct and traditional.

Clarke says that Moven—not part of the study—displays empathy in its savings function. The app—which uses a traditional bank as its financial rails—tells users when they should save. Saving is something many consumers have difficulty with.

“That’s the kind of effort that starts to build customer confidence,” says Clarke.