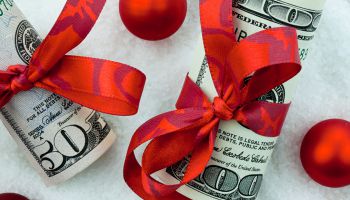 Early reports of holiday shopping indicate 2017 will be a banner year. Yet for one segment of the population—people with outstanding student loan debt—the upbeat holiday mood may be tempered a bit, at least by intent if not actual dollars.

With more than 44 million student loan borrowers in the land owing a total of $1.41 trillion, according to the The Student Loan Report, the debt overhang is having an effect. The Report—a website created in 2015 by Drew Cloud, a journalist struggling with his own student debt—conducted a two-question survey in early November of 1,000 student debtors currently in repayment.

The first question asked of student-loan debtors was: “If you had the choice this year, would you rather receive a gift this holiday season (ex. Christmas gift, Hanukkah gift, Kwanzaa gift) or an equally valued payment towards your student loans?”

In a post covering the results, Cloud said that “over two-thirds (69.30%) of respondents would prefer an equally valued student loan payment this holiday season instead of a traditional holiday present, which was the preferred option for 30.70% of borrowers in repayment.” The article indicated that the average amount owed at graduation for educational debt is $27,857.

The second question asked was: “If you receive money as a gift this holiday season, are you planning to use the money to make a payment towards your student loan debt?”

Here a slightly lower, but still comfortable majority (58.50%) said they intend to apply money they receive during the 2017 holiday season towards their debt. The remainder (41.50%) will spend the money elsewhere, according to The Student Loan Report.

If the survey respondents are representative and follow through with their intentions, there will be a few less Echo Shows, iPhone Xs, and BB-9E droids sold this season, unless other consumer segments pick up the slack.