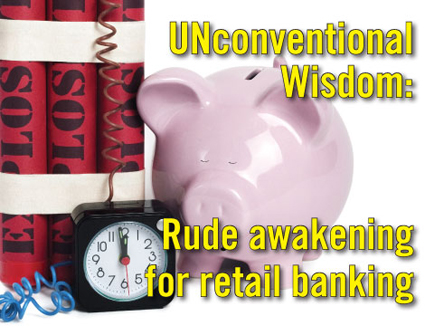 With the recent stepping down of Steve Jobs of Apple, we asked banking futurist Brett King to assess the impact of Jobs, Apple, and other, similar developments on society and, by extension, the potential impact on banking. The UNconventional Wisdom essay below was his response. You can read more about King, the author of BANK 2.0: How Customer Behaviour  and Technology Will Change The Future Of Financial Services at the end of this article.
In recent times there has been much debate over the role of banks, the banking industry, the performance of banks as a whole, trust and transparency, and the relevance of banking as we know it. This isn’t just an adverse consequence of the global financial crisis. This is something more fundamental: a change, or shift, in the way banking plays a role in our lives.

For decades, bankers have acknowledged that the basic functions of their business are increasingly being commoditized. In addition we find the industry’s margins rapidly thinning, the loyalty of its customers decreasing, and competiition getting tougher and more expensive. In the midst of this, bankers face the increasing need to invest in more and more channels just to keep customers engaged, while still having to maintain the old channels for a dedicated few comfortable with tradition.
Struggle for relevance
It used to be that banks were considered the blue chip stocks of established markets. They held a lower beta because they were less risky as stocks, but over time performed consistently. They were a safe bet.
When we look at leading U.S. bank stocks over the last four to five years, however, their performance relative to the market and other players has developed a downward trend that can no longer be explained by a lower beta. Banks have gone from low-risk, to just plain poor performance. The future of revenue looks shaky, and we see banks lashing out with announcements of layoffs, branch closures, branch openings, new partnerships, and the like. Banks are scrambling to show the market renewed value, but the market just sees the same fundamental organizations now operating in a fundamentally different landscape.

The pricing response of the stock market comes not just from seeing regulators responding heavy handedly to organizations involved in post-crisis issues, but moreso to banks whose very business models appear under significant threat.

A significant component of this threat comes from the way consumers are interacting with banks. Recent ABA research shows that since 2009 a growing percentage of consumers have chosen the internet as their preferred channel for day-to-day retail banking interactions, and we can only assume that the growth and growing acceptance of the mobile channel will further erode the role of traditional  channels. While many scramble for excuses to defend the status quo of the branch and argue why customers will suddenly change their behavior to return to the branch, the data tells a shocking story of rapid decline in branch utilization.

Trending analysis based on ABA and Nielsen channel preference data indicates that nontraditional channels are growing in usage. The series data for branch and internet have been normalized to show future likely behavior based on current trending. The actual plotted data is shown as a dashed line for comparison purposes.[The "log" (logarithmic) and "expon" (exponential) lines reflect trending methods used to provide smoothed estimates of future behavior.] Click here for larger version of image
Source: American Bankers Association, Nielsen Research


If mobile and internet will be the two dominant day-to-day banking channels of 2015, what are we going to do with all of the branch personnel who are no longer required? University of San Diego professor Frank Partnoy, an expert on the complexities of modern finance, believes banks need to half the number of branches and employees they have today:

“In the future, improved technology will reduce the number of human beings needed to allocate capital, as it has done in other service industries … contrast the employment numbers for banks and technology firms. HSBC and Google obviously differ in substance but both companies are focused on innovation and service, and also have roughly similar market capitalizations. The striking difference is that Google generates these numbers with fewer than 30,000 employees--not even as many people as HSBC is laying off.”

In this light, the current bank organization structure is built with the wrong focus and measurements in mind. A heavy product manufacturing cost structure can no longer be supported if margins are razor thin. A retailer that spends billions of dollars a year on stores (“branches”) that customers are increasingly not visiting, needs to rethink its fundamental investment in real-estate and personnel. The mix of personnel and skills required moves rapidly from traditional origination, sales and marketing to something very different.
Disruption is your future
We see the likes of remote check deposit capture, near field communication, peer-to-peer and mobile payments, social media, and other such technologies emerging faster than we could ever have anticipated. Not only do the technologies themselves have shorter and shorter half-lives, the cycle from innovation to yawn shortens.

The stickiness of customers is more fragile than ever, and customers are constantly finding workarounds to outdated and outmoded systems. They’re demanding investment in new channels and technologies; paying their friends with PayPal instead of checks or expensive wire transfers; using pre-paid debit cards instead of traditional checking accounts; and increasingly self-servicing on even the most complex investment products. They can do so because as banks no longer hold an information advantage.

In the midst of this, banks must now invest significantly in iPhone, iPad, and Android apps for mobile or tablet banking. Recently a raft of banks around the world have begun experimenting in their offices with touch screens, media walls, iPad-wielding relationship managers, Microsoft surface tables, and even facial recognition in signage displays.

Did you know that Itau Bank in Brazil—“the global Latin American bank”--has developed an ATM that uses gestures and 3D to control interactions?
Or that Spain’s BBVA redesigned the humble ATM entirely?
Such innovation has come to be expected. It appears banks are required to be more and more like Apple and Google today than like traditional banks, and therein lies the problem.
The Apple effect
When Amazon looked at the book industry it realized it was ripe for disruption, and now they’re the biggest bookseller on the planet and Borders, with its coffee house tables and such, is gone.

When Apple looked at the music industry it realized it was ripe for disruption, and since 2009 iTunes has been the largest reseller of music in the world.

Netflix did the same to Blockbuster.

Magazine publishers, who for more than a century answered to no one, are now forced to pay and submit to Apple’s standards before their content can be sold and read on the iPad.

Even banks are now required to ask Google and Apple for permission to deploy their “apps” to their own customers.

In all these instances, the incumbent retailers were disrupted. Distribution models fragmented, and ownership of the customer changed hands, from direct to an intermediary or a new retail aggregator.

Someone that better understood the value chain, customer behavior, and technology.

Someone who learned to make margin by changing the way we consumed content, the very context of the product itself.

In the future the destruction of the physicality of banking from branches, checks, cards and cash may very well be attributed to Steve Jobs and the emergence of the iPhone. The smartphone with its apps and multi-touch, supported by an app store, has triggered a whole evolution of interactions on-the-move.

As the mobile wallet emerges too, we’ll see a whole new world of banking; distributed, pervasive, engaged banking through a device that enables payments and connects customers with their bank everyday. (Editor’s Note: Read the September 2011 Banking Exchange cover story, “Ready or not, the Digital Wallet is here.”)
This trend in detached interaction will largely eliminate the need for “the bank,” but not, of course, for banking products and services. Thanks to Steve Jobs’ vision, banking of the future will be about banking embedded everyday into our life, a true utility, and no longer a place you go.

Steve Jobs aside, the reality is that this is the way it simply had to go as the digitization of things took hold.
Watch out for friction and relevance
There will be consumers who will find these changes difficult, too.

There are those that will complain loudly and vocally at the shrinking number of branches; the fact that they now have to pay to have their checks processed; or that we are charging for ATM withdrawals--all inevitable as the value chain gets disrupted.

And here banks are, stuck in the middle trying to satisfy our long-time loyal customers, while remaining relevant to the majority of customers who are demanding progress and innovation.

But is this shift in behavior and business models to be derided and rallied against?

Bankers who are smart realize that in the past we expressed the relevance of our bank through our products and services. As those products and services have become massively commoditized, our relevance (and differentiation) can no longer be articulated in a well-crafted advertisement or a glossy product brochure.

To remain relevant today, the trick is thinking about how a customer will access our product or service.

To be relevant tomorrow, we will be required to deliver those products and services with the least friction possible, whenever and wherever our customer requires.

The context of banking will be that it will be embedded in the daily life of consumers as they go shopping with their phone, as they buy a new car or home, or as they travel overseas or send their kids off to college.

Banking will just be a part of our everyday life, and our kids won’t even remember the days when you used to have to go to a building before you could do this stuff.


About the author
Brett King, banking futurist and consultant, wrote BANK 2.0, and is in the midst of founding Movenbank, the first direct mobile bank in the U.S. and U.K.
A frequent speaker at global events for financial services and innovation--he spoke at ABA’s 2011 National Conference for Community Bankers--King is an expert on innovation, customer experience, and channel distribution strategy. He publishes regularly in his role as industry advisor on Huffington Post and his personal blog Banking4Tomorrow.com, among other internet forums.

King also a runs a niche strategic advisory firm, User Strategy, and advises some of the world’s largest financial and technology organizations.