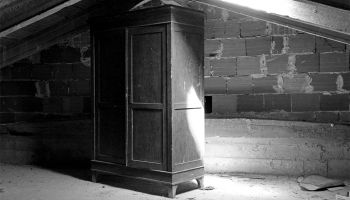 You never know what you’ll find inside an old wardrobe. This weekend, I found a story.

Often financial reporters get caught up in the “big picture” of major stories. Take the aftermath of the mortgage crisis. All the “littles” aggregate in tables and charts, illustrating trends. Trends, like ocean waves, consist of many, many drops. Many of the drops are people. Borrowers, loan officers, lawyers, and people that many wouldn’t guess are players in the story.

As a result of that top-down view, we often miss the human element, which frequently can have more than one side. Recently I found that in the form of an old wardrobe my family spotted on the side of the road.

The story behind the wardrobe

My wife, daughter, and I had shot out of the house late Friday night to visit an aunt and uncle who run a popular tourist attraction in a nearby state. We stayed in a hotel in the midst of the local “Mall Land”—my name for the ubiquitous plantations of nationally branded hotels, restaurants, and stores that gather by highway interchanges all over America as if they were factory-made prefab districts dropped in by parachute. After we hit one or two places there, my wife said she wanted to explore the real city nearby.

So we found the main street—called “Main Street”—and tooled along, seeing the occasional Saturday yard sale, when my daughter spotted a yellow wardrobe in the midst of other furniture piled in front of a small business building.

It didn’t take my daughter long to fall in love with the wardrobe. The man running the sale was willing to let it, and matching desk and chair, sell for $100. Before long it was all stuffed in the minivan.

This column is called “Reporter’s Notebook,” and that is what I am, a reporter. I can’t resist asking people questions.

After we’d loaded the last piece, I asked the head man, who I’ll call “George,” where the furniture came from.

“Are you cleaning up an estate?” I said.

“Oh, no,” said George. “This furniture is all from foreclosed homes in the area.”

George explained that he and his buddy had gone into the property maintenance business a while back, after he’d returned from 20 meandering years on the West Coast doing everything from construction to running a rental business.

The area is full of second homes owned by out-of-towners. The area had boomed after 9/11, when many people began to think in terms of distancing themselves from terrorism risks.

But the recession changed much. Many owners of primary homes as well as second homes could no longer make the payments, lacking either one or both of the income streams that had covered the mortgage originally.

Pretty soon, George said, homeowners in the region decided what equity they had wasn’t worth fighting for. “They turned in the keys and walked away,” said George. Frequently, they leave the furniture, even clothing, behind. If they have a primary home, they have nowhere to put another houseful of furniture, George explained, and moving it would cost money they don’t have.

Inevitably, most of the homes changed status, shifting from the original lender’s responsibility to that of Fannie Mae, Freddie Mac, or the federal Department of Housing and Urban Development. Such entities don’t have their own staffs for this kind of thing, and so they had to take charge through agents.

“But being so huge, they don’t deal with little guys like me,” said George. “They contract state-by-state with big players, companies that specialize in cleaning up behind problems.”

Somewhere down the line are local guys like George trying to make a buck, who are subcontractors to the state-level players.

The job begins with going to the house and changing all the locks, George told me. A day later, the “trashout” begins. George brings a trash truck or a dumpster to the home for all the unsellable items and outright garbage. The other items that have some value to George’s crew member or to the public—like bargain hunters—go in another truck and into temporary storage, if necessary, until George has a bright Saturday to put them out and see what the market will bear.

But back to the process. Following removal, then the crew throws the main power switch, turns off the water main, and generally cuts off the house from all connections to the outside world. The intent is to render it safe from accidents and incidents, though it sounds disturbingly like a body being taken off life support.

Inside and out, the home is wiped as clean as can be, in hopes of eventual liquidation to some other owner. When enough of this goes on in a region, it gets hard to make anything selling a home.

In some municipalities, this may lead to a home being condemned, not so in others. A city may even bulldoze a building, to keep it from becoming more of an eyesore.

That’s not George’s affair. He’s the trashout man. George has been amazed at the steady stream of business, even this long after the crisis.

George said he’s disturbed by the way his end of the business is typically portrayed in the media. There have been tales of mistaken addresses being given to businesses like George’s. Or stories of the elderly having to leave their homes, that kind of thing.

Such things happen, said George, but more typically each affair is straightforward, and his crew is ordered in only after the borrower has either just given up, or exhausted every avenue. He’s actually had neighbors bring his crews refreshments, so grateful are they that a property is being cleaned up and put on the way to disposal.

What George and his crew find sometimes defies the expectations. Some homes, having stood empty for some time, have been savaged for their copper by vandals, for instance. Some have been trashed by former owners out of spite and distress.

Then there are the complete surprises.

In one case, George and his crew entered a home slated for trashout, and saw a first floor strewn with garbage. The crew began working, but then the resident, angry and confused, came down the stairs demanding to know what was going on.

Shocked, given that the house seemed abandoned, George explained what he was doing, and told his crew to stop and return to their vehicles.

“You’d best talk to your lender,” George told the man, as he backed out.

With the money he can find selling off intact property like the wardrobe, George says he’s found this business to have a reasonable return, but it’s no gold mine. Every dumpster load requires a dump fee, and crew time and fuel both cost him something against the promised payment.

He does what he can to turn a buck. At one point in our talk a wind gust knocks down a standing lamp that came out of somebody’s living room.

“You just bought that,” he kids the wife of his former business partner, who is helping out in the yard. “You put it there.”

More in this category: « “I work for a hedge fund and I hate myself” Rethinking “tone at the top” and boards »
back to top