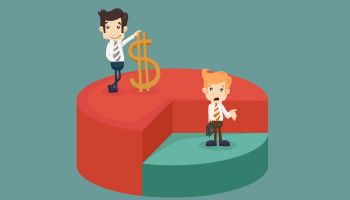 However, 18 months after implementation of the regulation, it appears the exact opposite is true: smaller banks have gained market share at the expense of the nation's largest banks.

Precise data on mortgage origination market share will not be available until regulators publish the Home Mortgage Disclosure Act data in September. But there are some proxy data points that suggest small banks have had little trouble gaining ground on larger lenders under the new regulatory regime.

Digging into the numbers

As of the week ended June 24, small banks grew their residential real estate loan portfolios by 10.57% since the week ended Jan. 8, 2014, based on figures, not seasonally adjusted. In addition, the large banks saw their portfolios decrease by 3.66% over the same time.

The H.8 data is complicated by legacy assets. Many banks have seen their residential mortgage portfolios decline on purpose. Loaded with toxic mortgages from the crisis, some of the largest banks have been happy to see their exposure to residential real estate shrink over the years. 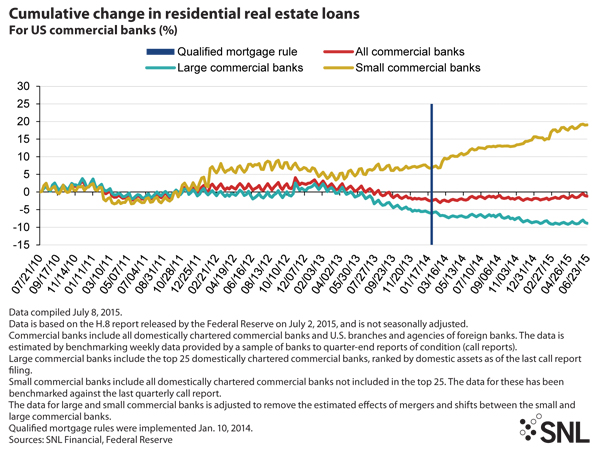 At the same time, growth in residential real estate portfolios of small banks appeared to kick into overdrive in 2014. The data provide a stark contrast to industry group claims that the standard would mean "Quitting Mortgages" for community banks.

"Frankly, we didn't see a lot small lenders abandon the market," said Guy Cecala, publisher of Inside Mortgage Finance, a publication that tracks and surveys the mortgage market. "And, in fact, I think a case could be made that smaller lenders have actually increased their business and market share relative to the large banks since the [Ability-To-Repay] rule went into effect." 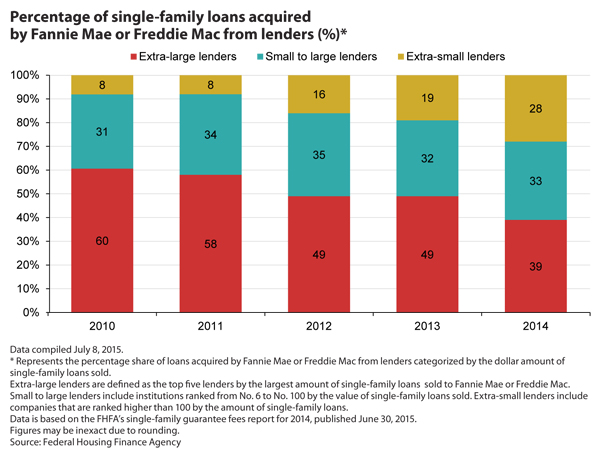 Market share gains from smaller lenders also appeared evident in a recent Federal Housing Finance Agency report on the state of guarantee fees. The data showed that the smallest lenders accounted for 28% of all loans sold to Fannie Mae or Freddie Mac, compared to 8% in 2010. Meanwhile, the share of loans sold by the largest lenders declined to 39% in 2014 from 60% in 2010.

Conservative players had little to adjust to

While much of industry's concern has focused on QM, the standard is only relevant as it pertains to the Ability-To-Repay rule.

The QM standard exists to provide lenders safe harbor protection from the Ability-To-Repay rule for generally safe mortgages. The QM standard's main constraint is a maximum debt-to-income ratio of 43%. The CFPB has carved out certain exemptions, such as for small lenders holding loans in portfolio and for loans that meet Fannie Mae and Freddie Mac underwriting requirements.

The Ability-To-Repay rule does not preclude any particular mortgage. Rather, the rule requires lenders properly underwrite mortgages and consider eight specific factors, such as income, when offering a loan. In essence, it is a simple banishment of the NINJA loans—no income, no job, no assets, no problem—that defined the financial crisis.

Dallas-based PlainsCapital Bank, with roughly $8.40 billion of assets, has been able to grow its mortgage lending. The bank's portfolio of loans secured by one- to four-family properties grew at a robust clip of 16.65% in 2014 compared to the previous year. Todd Salmans, chairman and CEO of PrimeLending a PlainsCapital Co., the bank's mortgage arm, told SNL that the bank proactively trained its loan officers on QM to avoid any hiccups.

"In our product mix, we haven't seen a big change. We have always taken a proactive stance by requiring full documentation on all jumbos—so there was no real impact post QM," Salmans told SNL in an email.

Not quite so rosy, says ICBA

But one industry group for community banks, the Independent Community Bankers of America, thinks the regulatory burden is having an adverse impact on community bank mortgage practices. The group's 2014 survey, published January 2015, showed 6% of small lenders are exiting the residential mortgage lending business.

Ron Haynie, senior vice-president of mortgage finance policy for the group, told SNL that Ability-To-Repay's Appendix Q requirements, which govern proper documentation of income, have been especially onerous for the smallest lenders.

"The smaller the institution, the more difficult and more concerned they are about being compliant," Haynie said. 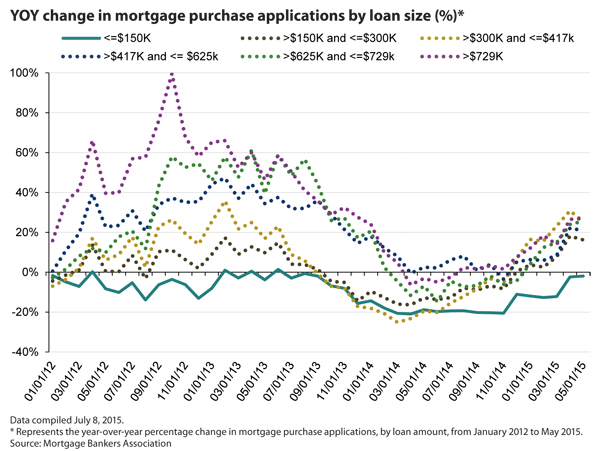 Impact on orgination of smaller mortgages

Another industry group, the Mortgage Bankers Association, allows that there is little evidence that small lenders are unduly suffering under QM.

But Michael Fratantoni, chief economist for the association, told SNL that there is evidence the regulation is doing harm to the first-time homebuyer market. Fratantoni points to originations for mortgages $150,000 or smaller, which have not recovered at the same clip as mortgages with larger principal balances. Such small loans were down 1.89% year over year in May, compared to an increase of 25.46% for loans $300,000 to $417,000.

Considering the importance of the first-time homebuyer market—enabling other homeowners to sell and move up the market—the Mortgage Bankers Association argues the CFPB needs to adjust the points-and-fees requirement in QM.

To qualify for QM status, loans cannot charge more than 3% in points and fees, which includes a litany of fees, such as title insurance and origination fee. Fratantoni said it is difficult for lenders to maintain profitability with that cap for loans $100,000 to $200,000 in size. QM already allows for more than 3% in fees for mortgages smaller than $100,000.

The Center for Responsible Lending, a consumer-oriented group, does not agree. Mitria Wilson, vice-president of government affairs for the organization, told SNL that broader factors are at play for the depressed first-time homebuyer market. Millennials are waiting longer to get married and settle down, and many of them are saddled with outsized student loan burdens.

"It's not the points and fees cap, it's that those who would be buying those homes face certain economic realities," Wilson told SNL.

Wilson also challenged the idea that smaller banks were struggling under the new regulatory burden, pointing to outsized profits for community banks over the last year.

While a more definitive answer awaits the release of HMDA data, it seems concerns about the impact of QM on small-bank lending might have been overblown.

However, that could all change should a borrower file the first lawsuit invoking a violation of the Ability-To-Repay rule. The rule increases lender liability and allows borrowers to sue if the bank did not properly underwrite the loan.

"It's hard to say Ability-To-Repay has affected the mortgage market," Inside Mortgage Finance's Cecala told SNL. "That doesn't mean it won't down the road."