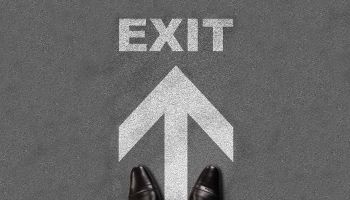 The Consumer Financial Protection Bureau is continuing its campaign to reform indirect auto lending practices. Some lenders are adopting flat-fee structures to cope, while others are exiting the business altogether rather than bear increased regulatory compliance costs in a low-margin business.

The CFPB has hit Ally Financial Inc. with $98 million in fines and restitution and American Honda Finance Corp. with $24 million in restitution for disparate impact violations in indirect auto loan pricing. The regulator alleged the lenders' dealer reserve compensation structures led to African-American, Hispanic, and Asian/Pacific Island borrowers paying higher rates. Under the disparate impact theory, prosecutors only need to prove a business practice produces a discriminatory effect, regardless of intent.

Dealer reserves compensate auto dealers on the difference between the wholesale rate and what borrowers pay, giving dealerships some discretion on the final rate borrowers pay. To avoid disparate impact scrutiny, some lenders have adopted a flat-fee compensation structure, which eliminates that sort of dealership discretion. The CFPB has said it approves of flat-fee structures, but industry sources say market forces encourage banks to keep offering dealer reserves.

"Basically, it was due to the low margins out there right now and the high compliance risk associated with that type of lending," Kozak told SNL. "The new CFPB rules mandate you assume a lot of the compliance risk over the dealers without mitigating any kind of the risk related to the pricing on loans."

Kozak said that the bank did not consider a move to a flat-fee structure because it did not see a path to profitability, especially since the bank avoids subprime lending.

"It really boiled down to the margin," Kozak said, adding that the CFPB scrutiny "certainly didn't help."

Boston-based Brookline Bancorp Inc. exited the indirect auto finance business in December 2014. CFO Carl Carlson told SNL that regulatory scrutiny was a tertiary reason for the exit, behind low margins—especially because the bank focuses on prime lending—and the fact that indirect auto lending does not provide a borrower relationship. Carlson said the bank did not think it could address disparate impact risk because of increased cost, such as hiring an additional employee to monitor dealer pricing decisions.

"We weren't making enough money already, and now you see it's going in the wrong direction," Carlson said. "We weren't seeing those [regulatory compliance] costs being pushed through to the market because the competition just wasn't moving."

Some banks have adopted flat-fee structures to stay in the business, but appear to be suffering market share losses as a result. 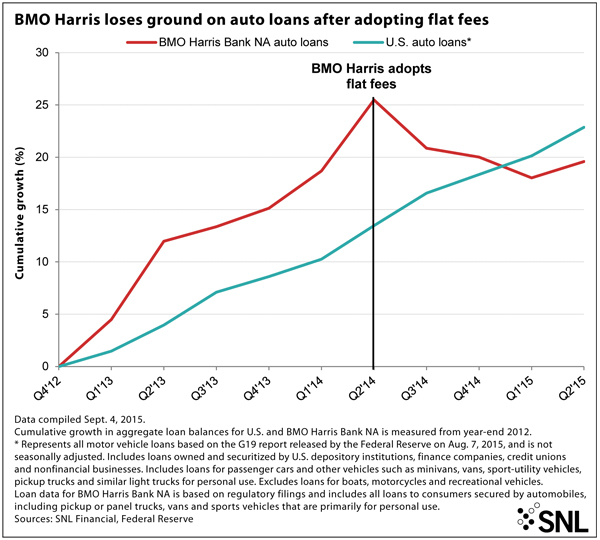 BMO Harris Bank NA was one of the first lenders to adopt a flat-fee structure back in May 2014, a move that earned plaudits from CFPB Director Richard Cordray. But the bank appears to have lost ground in a strong auto lending market following the move. From the fourth quarter of 2012 through the second quarter of 2014, the bank's automobile loan portfolio grew by 25.5%, beating the national aggregate of 13.5% growth. Since adopting flat fees, however, the bank's portfolio has shrunk by 4.7% while the national aggregate of motor vehicle loans has increased by 8.3%.

BB&T Corp. adopted a flat-fee structure for its subsidiary, BB&T Dealer Finance, as of July 1. While it is too early to see if the change has similarly affected the bank's auto loans, an Aug. 31 article in The Wall Street Journal quoted the owner of a dealership in North Carolina saying he has not sold a single BB&T loan since the change.

BB&T rejects the idea that its change will lead to a loss of market share.

"So far, the response has been much more positive than negative," said Derek Lane, manager for BB&T Dealer Financial Services, in a statement. "Many of our dealer clients say they expected this and some were even impressed that BB&T led this industry change."

BMO Harris made similar comments immediately following its change. "Many of our dealer customers have told us that they appreciate that this change has created a simpler and more transparent financing process," said Patrick O'Herily, a BMO Harris spokesman, in August 2014.

Change may be inevitable

Todd Baker, founder of bank consulting firm Broadmoor Consulting LLC, expects the CFPB to ultimately be successful in convincing banks to change their policies, but said the first banks to switch will likely lose market share.

"Until everyone does it, being the first mover for this would be a negative for you unless you were convinced that in the medium term the entire industry would move to this methodology," Baker told SNL.

The CFPB certainly appears committed to changing the way banks do business with automobile dealers, and it seems increasingly likely the regulator will be successful after a slow start.

Beyond the move to flat fees at BB&T and BMO Harris, publicly traded auto dealerships already use flat fees with some regularity, said David Whiston, an analyst who covers the space for Morningstar.

"It really doesn't sound like that big of a deal because they were doing a lot of flat fee already," Whiston told SNL. Whiston said financing accounts for only 30% to 40% of the public dealers' revenue from finance and insurance, with the rest coming from product sales such as warranty plans. However, he said smaller dealers are likely more reliant on reserve pricing, so the CFPB's campaign could prompt some consolidation in the auto dealer industry.

At the same time, industry group National Automobile Dealers Association does not think the CFPB's campaign is definitively leading to industry change. "The actions of any individual market participant are not indicative of where the market may or may not be heading," said Jared Allen, NADA's senior director of media relations.

Talks continue behind the scenes

More CFPB settlements appear likely in the near term as the regulator has reportedly been in talks with multiple lenders. However, it appears possible for lenders to avoid CFPB enforcement actions while continuing to offer dealer reserve structures. The American Honda Finance settlement mandated that the lender lower the amount of dealer reserve it offers, and news reports suggest the CFPB has similarly told Fifth Third Bancorp that it could achieve a lower monetary settlement if it lessened its reserve.

As reports trickle in of flat-fee structures bringing market share losses, lenders might find a lower dealer reserve option more palatable — as long as they can get comfortable with compliance costs. But if more and more lenders choose instead to exit a competitive industry, the CFPB could find itself vulnerable to political attacks that its campaign has left consumers with fewer choices.

Zach Fox is a senior reporter and columnist with SNL Financial. The views and opinions expressed in this piece are those of the author and do not necessarily represent the views of SNL. Share your thoughts at [email protected]

This article originally appeared on SNL Financial’s website under the title, "As CFPB indirect auto campaign gains steam, some banks exit the business"