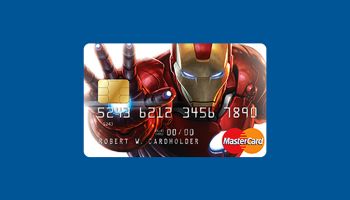 Synchrony Bank's Marvel affinity cards are just one part of a marketing tie-in program between the card issuer and the comics company.

We don’t know how Stan Lee feels about banking, saving, and credit cards, but if there’s one thing the guru behind the iconic Marvel comic heroes knows, it is promotion. He regularly appears in bit parts in Marvel character movies.

Indeed, now banking will have a piece of that space. Synchrony Financial has entered the Marvel universe in several ways. In an agreement with Marvel, it will co-promote the company and its products in conjunction with Marvel feature films. And it has just launched a Marvel affinity card.

A series of videos created for Synchrony show average guys unsuccessfully trying to save the day by imitating Marvel heroes. One would-be savior, for instance, attempts to hurl a garbage can lid like Captain America’s shield to foil a purse snatcher.

Unfortunately, a crushed galvanized can lid flung by an overweight nerd makes a poor substitute for an “vibranium” shield launched by a super hero. But the message is that, lacking super powers, one can still “Save Like A Hero” at Synchrony. (Synchrony Financial was formerly GE Capital Retail Finance Corporation. It is now a separate financial services company, and owns Synchrony Bank.) 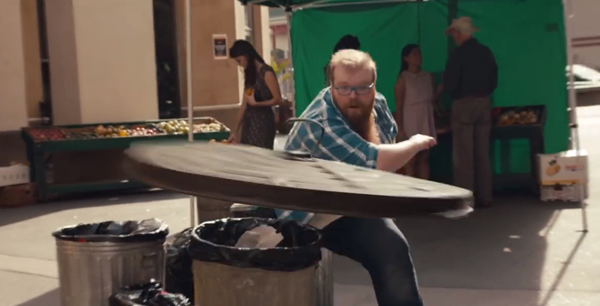 Good try, but a garbage can lid just isn't Captain America's mighty shield. Click on the photo to view the video.

This campaign is tied to the May release of Marvel’s “Captain America: Civil War.”

Another tie in, recently wrapped up at a special premiere of the movie, was a contest encourage high school girls to explore their ability to help the world by getting involved in STEM: science, technology, engineering, and mathematics.

Most notably, there’s the longer-term impact—you have to use that word at least once in an article touching on superheroes—of the new Synchrony Marvel MasterCard, announced on April 12. The new affinity card, with five choices of look from an assortment of Marvel heroes to single portraits of Spiderman and Iron Man, offers some mainstream benefits as well as some targeted specifically at Marvel fans.

A Synchrony spokesman explained that the card was designed to provide the biggest cash back payoff for customers who value experiences.

“Unlike some cards that focus cashback rewards on gas, groceries, and other goods, this card provides the most rewards—3% cashback paid in a statement credit—for leisure and entertainment activities,” the spokesman said. This ranges from movies, concerts, and amusement parks to digital apps and games, aquariums and restaurants.

Of course, nowadays with mobile wallets “cards” are becoming “transformers”—sorry, mixing universes now—in that plastic becomes a choice on an app. With part of the appeal of such affinity cards being the images themselves, what will happen when the cards go virtual?

A MasterCard official noted that many such arrangements permit graphics to be adapted to wallet apps. However, the bank spokesman said Synchrony was still exploring such issues.