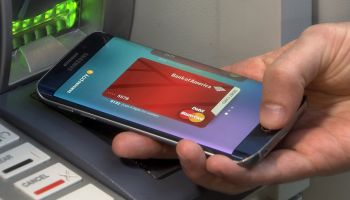 Bank of America debit card holders now can “just phone it in.”

The bank recently became the first  to introduce a cardless technology that allows its debit card customers to substitute their smart phones for plastic at the bank’s ATMs. Customers who upload their Bank of America debit card onto the Android Pay app will be able to withdraw cash, make transfers, and check balances simply by tapping their phone on the ATM screen.

Hari Gopalkrishnan, Client Facing Platforms Technology CIO for Bank of America Merrill Lynch, says the change was driven by the realization that mobile phones are the banking vehicle of the future.

“We’ve been looking at what our customers are doing, and they’ve increasingly adopted using their mobile devices for everything,” he says. “We started to see an evolution and felt it was a compelling experience to offer our clients the chance not to have to carry a card around.”

Mobile as center of financial universe

Cardless ATM technology is a continuation of Bank of America’s strategy to make the mobile device the center of all customer interactions.

“Our strategy has been—for every channel we have—to let the mobile phone be the locus,” Gopalkrishnan explains.

For years, Bank of America customers have been able to use their mobile phones to check their balances. If they needed help with their account, the call center’s number was printed on the back of their debit card.

Bank of America trumped that with technology enabling a smart phone user to be automatically connected to a specialist who could help them. Similarly, if you’ve got a tax refund coming and would like to talk to someone at the bank about investing it, the bank has a phone app that looks up a specialist and makes an  appointment for you.

“When you walk into the branch, they know who you are and are ready for the meeting,” Gopalkrishnan says.

Cardless ATMs are intended to be one more opportunity for customers to make the same effortless connection with the bank.

Not just about the kids

One might assume that technological enhancements are designed to help the bank target the youth market, but Gopalkrishnan says that is not necessarily the case.

“We’ve found that our iPad apps are very attractive to the older population who find PCs to be daunting but tablets very useful,” he says. “These new technologies cut across multiple age groups; they don’t appeal just to millennials.”

While other banks almost certainly will follow suit, for now being the first to roll out cardless technology gives Bank of America an edge at the ATM.

“It’s our software, so we can decide which cards we’ll allow [from other banks] and how we want those to be used,” Gopalkrishnan says in response to a question, but noting that is a peripheral matter.

“Bank of America is not in the business of locking out its competitors,” he says. “Our focus is on creating a good experience for our customers.”

Cardless technology may improve their experience more than customers realize. For one thing, eliminating the need for a debit card gives them added security.

“This helps us continue to get away from swipe transactions where the card number is exposed,” Gopalkrishnan says. “Customers can feel very safe with this; it’s more secure than a magnetic card.”

Being able to use their phones to withdraw cash is more than just an advancement in customer service, he explains. “It’s also an advancement of the platform.”

The cardless technology should be available at 5,000 of Bank of America’s ATMs by year-end. Beta tests have been in place for the past few months at various locations in Boston, Charlotte, New York City, San Francisco, and Silicon Valley.

“Our general model is not to think we’re smart enough to know exactly what customers want,” Gopalkrishnan says. “This a new technology and customers are still getting used to it.” They have to learn, for instance, where to wave their phone against the symbol that designates a cardless ATM.

Significance of the Google connection

Judging by the stores that accept Android Pay—BabiesRUs, Disney, Whole Foods—it is clear the Google application targets a youthful, upscale market. By becoming a tangential partner of Android Pay, Bank of America taps into that.

“It comes down to us wanting to be where our customers are,” Gopalkrishnan says. “If they’re using a certain [digital] wallet and that’s how they manage their financials, we want to be there.”

When customers forego their debit card for their smart phones, it’s likely to give everyone an advantage. “It’s good for them to have more flexibility,” he says, “and it gives us more ways for our customers to interact in an ecosystem that benefits everyone.” 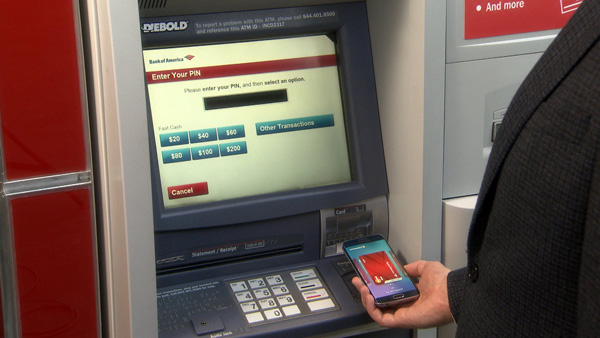