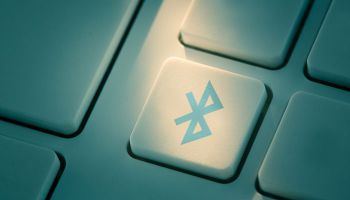 While bankers frequently speak of the heavy regulation of their industry, many other businesses rely on formalized structures organized by the private-sector for their industries to be able to function. Often this is hidden from the view of most.

A good example is Bluetooth technology—symbolized by that funny little logo up in the tool bar of your devices.

How many millions of times a day do people connect devices from headphones to remote controls to smart watches to laptops, tablets, and smart phones using Bluetooth? The oddly named tech stands in where a cable or some other physical connection would once have been required.

Yet it’s a cinch few users have ever considered that someone’s in charge of Bluetooth.

A model for U.S. open banking?

Actually, there is. Bluetooth SIG (special interest group) is a voluntary private-sector membership group consisting of over 32,000 organizations worldwide that develops and maintains standards for the ubiquitous technology.

Bluetooth and the Internet of Things definitely intersect with the present and future of banking, but Steven Smith, CEO and co-founder of data aggregator Finicity, brings up the Bluetooth SIG as an example of how banks, fintechs, and related companies can bring about practical open banking here without taking the same path taken in Europe.

In Europe, data sharing was accomplished by governmental decision. The recently implemented open banking scheme grants qualified third-parties with permissioned access to consumers’ financial data at banks. Ultimately, it was put to the banks what they would do, and when they would be ready to do it, Smith explains.

By contrast, in the U.S., things are not progressing that way.

No open banking law exists here. Furthermore, Smith points out that no federal regulator has carved out the lead role in regulating data sharing nor shepherding anything like open banking.

Federal Reserve Board Gov. Lael Brainard has, in a series of speeches, raised important questions about data aggregation and other fintech developments. (“The caution flags are appropriate,” Smith says.) The Comptroller’s Office has been researching innovation issues and the Federal Trade Commission has been looking into it. Perhaps most significantly, the Consumer Financial Protection Bureau—under its old leadership—published a set of principles regarding consumer-authorized financial data sharing and aggregation last October.

“It will be a long time before there is clarity in the U.S.,” says Smith. The nature of banking in Europe and in the U.S. have had a role in how open banking has evolved.

“Our banking structure is a lot more complex and we have a lot more players, and fintech is a lot bigger here,” says Smith.

Smith sees banks as being behind the fintech industry in their thinking on open banking—it’s fair to say that right now the banks have the data and the fintechs have the analytical capability—but he sees the future as one where the efforts of both industries converge. Various working groups already exist, some of which Smith is involved with, and he believes they will begin producing results in 2018 that could bring about an American take on open banking.

In time, Smith believes, these efforts will come together into some sort of special interest group along the lines of the Bluetooth organization, setting standards that can help open banking and data sharing work well. He points out that the banking industry has a history of creating groups that set standards and practices, such as Nacha. The SIG he sees coming would combine the input of banks and fintechs.

Smith says that what is driving this evolution, and with the interest of those consumers who have some understanding of the issues at stake, is the quest for creating frictionless financial services. The long, cumbersome processes of a generation ago just won’t cut it with today’s consumers who are accustomed to doing things at the speed of apps.

As an example of the evolution already taking place, Smith points to mortgage lending. Quicken Loans’ Rocket Mortgage relies on access to consumers’ financial information, and he says that the top 25 banking players are all allocating funds to catching up with better, faster online experiences. Smaller institutions are looking to the providers of their mortgage loan origination systems to bring them similar capabilities in order to remain competitive. Smith says that Fannie Mae and Freddie Mac are driving increased efforts to reduce mortgage-lending friction.

What could slow things down?

A key question is whether there is anything out there that could be a “stick in the spokes” of the advancement of something like open banking in the U.S. Increasingly consumers appear ready to give up a great deal in the name of convenience, but could that suddenly change?

Smith doesn’t think so. Many consumers—many of whom have no trouble letting their apps know where on earth they are—have grown used to the convenience of services that can reach out and draw on their financial information, saving them time. For example, information that TurboTax can access with consumer permission from financial services firms, payroll processors, and more populates fields in tax forms with a couple of clicks. Consumers accustomed to reviewing their finances in one place using services like Mint wouldn’t want to begin tediously inputting data manually, says Smith. (Both are part of the Intuit product family, as are Quicken Loans.)

“I think the digital transformation train has left the station,” says Smith. Regarding open banking, with the possibility that it will chiefly be a cooperative venture between fintech and banking, rather than imposed by the government, Smith is confident.

“We may take a few intermediary steps,” rather than moving right into something like Europe’s effort, he says, “but I don’t see anything that would take us to a different place.”