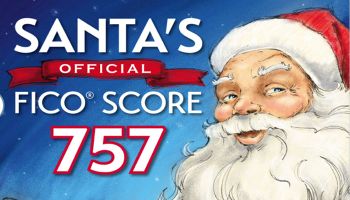 So says FICO, which claims to have used an actual FICO algorithm to come up with the number. At 757, Santa’s score is well above the U.S. average of 695.

“Santa works hard to understand his credit health, especially during the holiday season,” says Ethan Dornhelm, senior principal scientist for FICO. “Santa’s FICO score represents a snapshot in time. It may be impacted by borrowing money to purchase materials to build millions of toys for kids around the world, and it considers things like whether he pays his bills on time, and the level of his revolving balances after the holidays are over.”

Santa’s FICO score may qualify him for favorable lending terms, which could save him a sleigh-load of money next time he refinances his home toy factory mortgage.

The infographic below illustrates the factors that went into Santa’s FICO Score.

“Santa chose to share his FICO score to encourage others to be proactive about their personal finances and checking their FICO scores, particularly during the holiday shopping season,” says Dornhelm. “Santa also wanted to call attention to the fact that he can access his FICO scores through the FICO Score Open Access program. This program gives more than 100 million consumer accounts access to FICO Scores for free through their lenders, so now it is easier than ever to check your FICO score—and check it twice.”