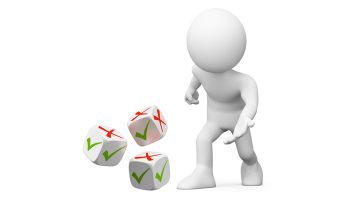 Whenever someone thinks they have invented a system that insulates a bank from credit risk, I grow skeptical, and I remember that most business lending still entails a fair degree of “the human element” on either side of the relationship. And if you think that can be captured by a formula or a system …

For example, can personalities, however well-intentioned, undermine an internal control—and without leaving any tracks? Perhaps you’ve seen this in your own career. I know I have …

Tested by a raised eyebrow, and a hanging phrase

I recall one instance from my days in Florida at a large regional bank where I banked two real estate developer brothers.

The brothers were successful, well-connected, and physically impressive. They carried an aura of “excitement” about themselves and their business wherever they went. In time they thoroughly impressed one of my big bosses, an executive vice-president, who had taken an interest in their activities.

I mentioned to the EVP one day that I had declined the brothers’ request for a performance letter of credit, based on a provision of the bank’s loan policy. We could have ultimately accommodated the transaction, but not within the tight time frame within which these brothers constantly operated. The bank’s policy was my touchstone.

The big boss looked at me, and with a faint smile, said, “I’d have found a way to do that…”

Well, there was in fact a way that I could have evaded the internal controls and done as the brothers had asked. I chose not to. But I never forgot the tone that this man set with me and perhaps others in the chain of command, the implication that rules were made to be bent.

Imagine the reaction of the bank’s auditors if they had known of this conversation.

People, the wild-card in credit

People inside and outside of your bank can defy any system. But how many readers feel that some individuals may be more risk-prone than others?

In thinking about other lenders, we’ve all met “cowboys,” who are brash and impetuous.

We recognize those who are “uncurious,” who aren’t motivated enough to turn over a rock that should be flipped.

We know others who are careless, or plain sloppy.

Perhaps we’ve worked around those who are lazy.

And then for all of us once in a while, we come across someone who is just plain dishonest.

Usually in all of these, we rely on our bank’s internal controls to keep our institution out of serious trouble. But we need to ask if one senior executive like the EVP I described is undermining those controls.

A trend that is now catching the attention of the supervisory agencies is a decline in formal credit training at many community banks. This development is worth watching closely, especially for banks that have historically filled their lending ranks with individuals trained at other institutions.

Two questions for all lending managements and boards to ask where this attitude toward staffing the lending line prevails:

1. What’s the quantity and the quality of the training brought into your bank?

Do you know much about the internal training processes that these individuals experienced, especially the formality of the process itself?  Perhaps you do in local in-market situations—but what about individuals coming from out of town? How much can you safely assume?

2. What did your credit hire learn after the training?

Even if the bankers are reasonably well trained, how confident are you that you can spot any bad habits that may have been acquired? Are you prepared to properly deal with that possibility?

However, that’s no substitute for proper credit training. Circuit breakers are designed to keep your house from burning down, but they are not a substitute for avoiding overloaded electrical receptacles.

Most internal controls are verifiable as to their compliance. Incomplete documentation at funding gives rise to exceptions that are generated, tracked, and cleared by persons independent of the lending officer.

But can you ever be certain that they operate completely as designed and intended?

The story I told about the EVP and the brothers is an example of a “stealth” credit risk. I have in mind another from my early days in banking. I’ve seen both kinds of weakness over my years in banking, in varying degrees of clarity and risk exposure to the bank.

Imagine your bank’s hierarchy includes a respected vice-president lender who enjoys a reputation for giving excellent service to his prominent customers—the “can do” banker.  What if such an official “needs” an exception to a particular prefunding condition, or else the loan can’t fund?

What if that same vice-president lender is a “hot shot” and a bully? One who expresses disdain for support staff but is influential with lending management from whom his condescending ways are well hidden?

Can those charged with enforcing the system of controls be coerced into bending a control for him? They might excuse doing so on the basis of good service when it’s actually because the encounter with the lending officer would otherwise be unpleasant, if not outright nasty.

How can auditors catch things like this?  And how much of this goes on that is never detected in part because there wasn’t an adverse event that subsequently exposed it?

In larger banks with more elaborate systems, it’s very difficult to circumvent such rules but in smaller banks where there are more people doing multiple jobs, it’s sometime easier.

Events of recent years have exposed the difficulties of modeling human behavior. Long Term Capital Management, the hedge fund that in the late 1990s made huge leveraged bets on the predictability of human behaviors and suffered enormous losses.

Banking is ultimately a service business and good service to our customers is getting what they need and on a timely basis. Sometimes, circumstances stand in the way and the human tendency, too often, is to compromise the control.

I think the examples of undermined controls drawn from my experience illustrate how difficult it is to build an integrated and effective system of internal controls.

Perhaps this is another example of the importance of character. An effective system of internal controls relies substantially on the good faith of those who administer the system and as well as those who must work within its constraints.

Ultimately, does each lender have what it takes to stand by their training, by their policies, by their experience, when the temptation to do otherwise arises?

The overarching lesson to me from both the decline in formal credit training in many banks and effective enforcement of controls is to understand our limitations. Our risk abatement efforts must be habitual, systemic, and continuous. And we must remember that we are relying on fellow human beings whose actions arising from our shared human nature defy precise modeling.

More in this category: « Making friends, making customers Pick up the phone and make a customer date »
back to top